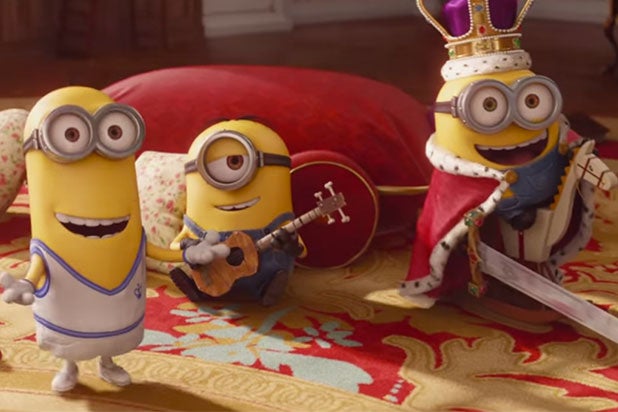 “Minions” invaded the box office, scoring a big win for the little yellow helpers, for Universal and Illumination Entertainment, which added to its list of successful movies in 2015.

At the Thursday night box office, “Minions” raked in $6.2 million. Then on Friday, the film grossed $46 million, paving the way for an impressive $115.2 million opening weekend.

While the animated flick didn’t beat 2007’s “Shrek the Third,” which keeps the title of highest-grossing animated movie of all time, with its $121 million debut. “Minions” is still a huge hit financially and it with audiences, receiving an “A” CinemaScore.

TheWrap spoke to Paul Dergarabedian, Senior Media Analyst at Rentrak, about why Universal and Illumination Entertainment’s “Minions” did so well.

According to a recent article by Bloomberg, Universal Pictures undertook one of its biggest-ever marketing campaigns with this movie. The studio decorated theaters with giant Minions, stuck yellow labels on half a billion Chiquita bananas and partnered with companies like Amazon, General Mills, McDonald’s, Comcast and Snapchat to deliver almost $600 million in ads and promotions. Universal also promoted the movie by selling yellow Minions Tic Tacs, iPhone cases, and other memorabilia.

“You see them all over,”said Dergarabedian. “Everywhere you look, Minions are everywhere.”

The production budget for “Minions” was $74 million. According to Box Office Mojo, “Toy Story 3” had a budget of $200 million, so comparably, Universal spent a modest amount in the production of “Minions.”

“Minions are profitable,” said Dergarabedian. “Universal knocked another one out of the park in the wake of ‘Furious 7’ and ‘Jurassic World.’ Universal is on a roll. Their strategies are paying off.”

Dergarabedian credits the film’s release date with part of its success.

“Last weekend, we had ‘Terminator Genisys’ and ‘Magic Mike XXL,’ so it was a little too crowded, so Universal hit a little sweet spot. No other movie wanted to open up against them,” he said.

“They were perfectly book ended by ‘Terminator’ and ‘Ant-Man’ and ‘Trainwreck’ next weekend,” Dergarabedian continued. “They had this beautiful window sort of to themselves, and look at the results. It proves that family audiences are always on the lookout for new entertainment in the summer.”

“It’s the Minions — they are so beloved by the audiences,” Dergarabedian explained. “They made their mark and an impression in “Despicable Me” and “Despicable Me 2,” and audiences love them. Universal gave audiences what they were yearning for, especially kids that love the outlandish nature of the Minions themselves. It comes down to those characters and how they resonate with the audience.”

Dergarabedian also mentioned that the movie creates an experience for the whole family, and due to it being part of a franchise familiarity, it was bound to be a big opening movie.

“Illumination Entertainment did a great job with the movie itself — these movies are just really fun and they create the perfect family movie-going situation. You just have fun, and it feels like you’re going along for a ride with the Minions. Minions translate to every language — their humor, their image, and how they act is relatable to everyone around the world. They are like the marshmallows in a box of Lucky Charms.”

“Minions had the benefit of the franchise familiarity,” he continued. “Even though it’s not a sequel, it gets the same juice and same boost from being part of a franchise. Worldwide, the ‘Despicable Me’ franchise is massive.”

5) They draw young and old, male and female