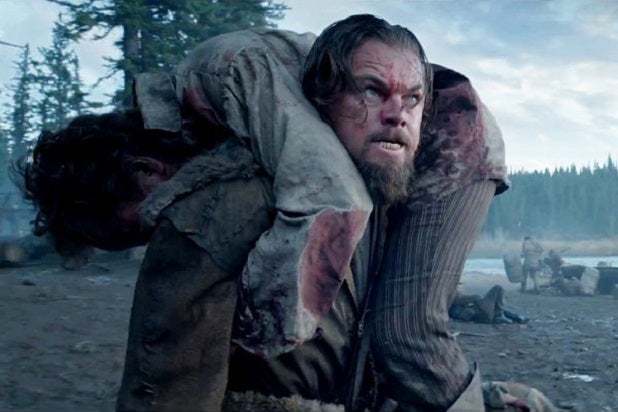 “The Revenant” put a bear-sized scare into “Star Wars: The Force Awakens” this weekend with a sizzling $39.5  million nationwide box office debut.

Fox’s R-rated frontier saga fell just short of Disney’s blockbuster, which rallied to take in $41.5 million for its fourth straight weekend win, but the breakout opening by “The Revenant” was almost $20 million over pre-release projections and a clear-cut triumph.

the big showing, which included beating “The Force Awakens” on Friday, sets “The Revenant” up for a strong box office run going forward and gives it major Oscar momentum. That will be particularly true if the film, DiCaprio and director Alejandro G. Iñárritu  can bring home trophies at Sunday night’s Golden Globe Awards.

What drove the stunning weekend for “The Revenant”? Here are five factors that helped:

Leo Was a Lion
About two years ago, DiCaprio was considering taking the lead in the “Steve Jobs” biopic, which was then at Sony, but he opted to take the lead in “The Revenant” after Iñárritu stepped in as director. “The Revenant” was originally to be directed by Park Chan-wook with Samuel L. Jackson to star, and later by John Hillcoat with Christian Bale in negotiations for the lead. The decision to go with DiCaprio was a game-changer. His last four movies — “The Revenant,” “The Wolf of Wall Street,” “The Great Gatsby” and “Django Unchained” — have opened to an average of roughly$35 million.

New Regency Hung In
Arnon Milchan‘s New Regency, which produced Iñárritu’s 2014 Oscar winner “Birdman” as well as 2013’s “12 Years a Slave,” initially envisioned a $60 million cost for “The Revenant.” But by the time the film actually went before cameras, the budget was pegged at $95 million — high for a dark period drama starring men with heavy beards. And it went even higher following a run of tough luck: The production endured an unplanned six-week hiatus because of a crushing lack of snow in Canada, and then had to shift to Argentina — where a six-day shoot cost $10 million — and then back to Canada’s Calgary.

By that time, the cost of “The Revenant” had soared to $135 million. Brett Ratner‘s RatPac, China’s Alpha Pictures and Empyre co-financed, but their contributions were capped. “The work speaks for itself,” said a spokesperson for New Regency at the time. It speaks even more loudly after this weekend.

Slow Rollout Built Momentum
Fox and distribution president Chris Aronson chose to launch “The Revanant” in four theaters — two in L.A. and two in New York, on Christmas Day. Then, rather than expand in the normal platform pattern for its second week, “The Revenant” was held in those four theaters and wound up averaging a very strong $110,000 in the Oscar-qualifying run. For this weekend’s wide rollout, Fox was able to muscle “The Revenant” into 3,375 theaters, impressive given the crowded post-holiday marketplace. “That delay gave it a chance to breathe and get its footing with audiences while that space movie, ‘Daddy’s Home’ and ‘Sisters’ were rolling over the holidays,” Aronson said.

It Wasn’t “The Hateful Eight”
Prior to this weekend , both “The Revenant” and Quentin Tarantino‘s “The Hateful Eight” must have looked to casual fans like two very long, violent movies set in Old West snowstorms. That’s not a popular genre for young people, many of whom probably chose to see just one. The stunning debut of the “The Revenant” made their choice clear, and when they did see it, Iñárritu’s staging and Emmanuel Lubezki‘s cinematography were uniquely distinctive. DiCaprio’s star power made that decision easier, especially for women, who made up 43 percent of the audience. That’s not a huge number, but is good considering the gritty subject matter: 1823 fur trapper Hugh Glass battling to return to his family after being mauled by a bear and left for dead.

Awards Bring Rewards
Even before this weekend, “The Revenant,” DiCaprio and Iñárritu were building awards momentum and that piqued audiences’ curiosity. After receiving four Golden Globe nominations, it last week added nominations from the American Society of Cinematographers and Producers Guild, and DiCaprio was recognized earlier by the Screen Actors Guild. This may finally be the year that DiCaprio, a three-time nominee for Best Actor, gets his first Oscar. “The Revenant” is sure to be the talk of Sunday night’s Globes ceremony. If it scores big there, and again at next week’s Oscar nominations, it will be front and center in the Academy Awards discussions, and at the box office over the next few weeks.