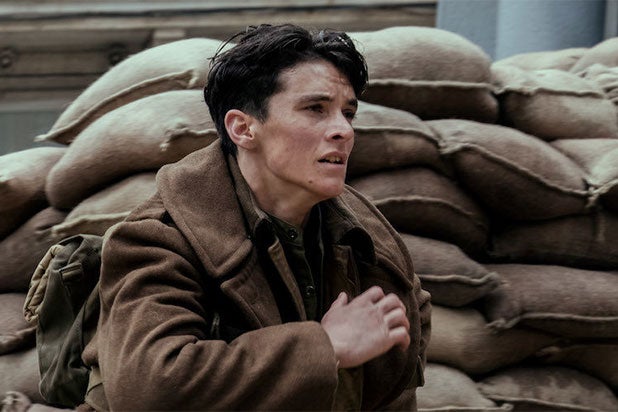 At the start of the summer box office season, “Dunkirk” was seen as one of the wild cards. Christopher Nolan‘s latest epic — a World War II movie with a $150 million budget, a PG-13 rating and little dialogue — was seen as a big risk for Warner Bros., who entered the summer needing a big hit.

Now, on top of owning the biggest film of the season with “Wonder Woman,” WB now has a serious Oscar contender, as “Dunkirk” earned a 92 percent Rotten Tomatoes score, an A- on audience polls from CinemaScore and the top spot at the box office with a $50.5 million opening. It’s enough to give Warner Bros. $1 billion in domestic grosses for the 17th year in a row and has put “Dunkirk” on track for a possible 3x multiple and Best Picture contention at next year’s Academy Awards.

Here are the factors that led to this success.

If “Dunkirk” were made by another director, it’s likely it wouldn’t have had the studio support it has enjoyed. But insiders tell TheWrap that Nolan is placed in high regard at Warner Bros. It’s not surprising, considering that Nolan has produced hit after hit for WB, from the “Dark Knight” trilogy to “Inception” to “Interstellar.”

But that reputation played a major part in the film’s promotion, as WB used Nolan’s status as one of the most recognizable directors in Hollywood today to grow interest in the film in the middle of summer blockbuster season. It also helped that Nolan designed the film to be just as much a thriller as it is a war movie, blending in the tense drama that his fans have come to know him for with the solemn tone needed to tackle the story of one of the biggest war evacuations in world history.

Nolan hasn’t just built a relationship with WB over the past 12 years, he’s done it with IMAX, too, having worked with the premium format company since “Batman Begins.” That long relationship led to IMAX supplying an unprecedented amount of cameras and film stock for Nolan and cinematographer Hoyte van Hoytema to work with. According to IMAX, approximately 70-75 percent of “Dunkirk” was shot with IMAX cameras, the most for any non-digital IMAX project.

“Chris Nolan has designed this film as an immersive theatrical experience,” IMAX CEO Greg Foster told TheWrap. “This is a film people want to see in theaters from a director that values the theater-going experience, and we’re thrilled with the partnership.”

As noted in our preview on Wednesday, it’s possible that independent trackers underestimated “Dunkirk” because older males audiences — the primary demographic for WWII films — aren’t always on social media where their interest can be gauged. But Harry Styles’ fans are definitely on social media, and they were key to the film’s word of mouth.

In each of the three weeks leading up to the film’s release, “Dunkirk” was one of the top 3 most talked about upcoming films, becoming one of the top trending topics worldwide on Twitter following the release of its final trailer. While older audiences remained by far the majority of moviegoers this weekend — 76 percent over the age of 25 — Styles’ teen and young adult fans served as a signal boost that increased awareness of the film’s trailers and kept up interest for weeks before.

4.) Peaking at the right time

But while it’s good to build up interest, Foster believes it’s important to make sure that audience interest peaks at just the right time.

“Sometimes a movie peaks a week before it’s coming out in theaters, and sometimes it peaks even earlier than that and some people feel like they’ve already seen the film,” he said. “‘Dunkirk’ peaked on the very first day it could be seen in theaters.”

While “Wonder Woman” and “Dunkirk” are two very different films, the one big similarity the two WB films share is that they caught the wave of critics’ praise at just the right time. Both films had their review embargoes lift the Monday prior to the film’s release. This meant that moviegoers got news of both films’ critical acclaim — both scored over 90 percent on Rotten Tomatoes — just days before they could see it in theaters and further increasing the film’s status as an event to be seen on the big screen.

As it turns out, the release date that was seen by some as a risk may end up being an advantage. “Dunkirk” is a unique offering at cinemas right now, with its fellow July 21 releases being “Girls Trip,” an adult comedy, and “Valerian and the City of a Thousand Planets,” a sci-fi space flick. This means that “Dunkirk” can serve both the demand for more cerebral fare from audiences who want something different than franchise flicks, while also reaching out to the blockbuster crowd with a director known for providing adrenaline rushes in the summer.

“The fact that Chris made this film and that we can position it as an action thriller, that he can tell a story his way and we can bring it to market…that late July playtime gives us many weeks to run,” said WB Domestic Distribution President Jeff Goldstein, noting the success of “Inception” in a similar release frame in summer 2010.

This release date could also help “Dunkirk” down the road. Through the end of August, the only sure competition for “Dunkirk” when it comes to prestige audiences is Annapurna’s “Detroit” — meaning that Christopher Nolan has the chance to continue his streak of strong box office multiples. His last film, “Interstellar,” made $49.5 million in its opening and finished with $188 million for a multiple of just under 4x.