After his spy spoof “The Brothers Grimsby” landed with a $3.1 million thud at the box office this weekend, Sacha Baron Cohen may be thinking that he’s getting a little old for this movie comedy stuff.

Not in real years, of course. The British actor is only 44, hardly a graybeard in Hollywood terms.

But “Grimsby” is by far Baron Cohen’s worst movie opening. Its first-weekend haul is just a fraction of the money that his other R-rated comedy efforts — like 2006’s “Borat,” 2009’s “Bruno” and even 2011’s “The Dictator” — managed to make in their debuts. 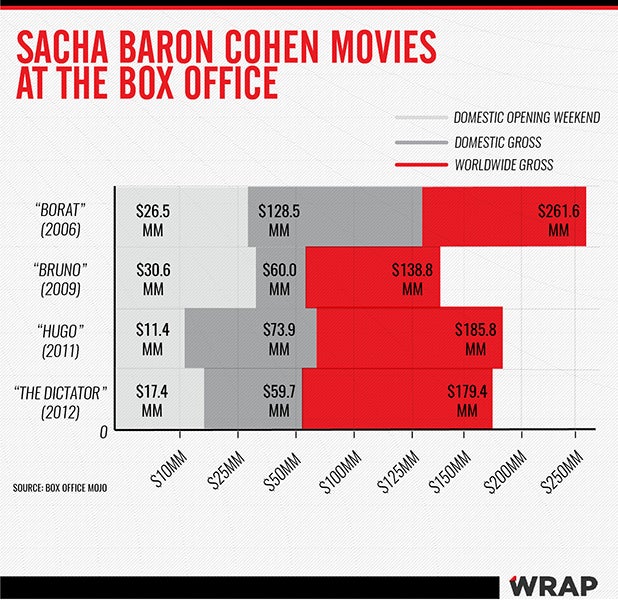 So maybe his act is getting a little tired.

But that alone doesn’t explain went wrong for”The Brothers Grimsby” and why Baron Cohen doesn’t deserve all the blame. Here are five reasons why the movie didn’t click.

1. Baron Cohen Kids, but He Is No Kid Anymore

Though hardly ancient, the star is no longer a fresh face with some new takes like, say, Amy Schumer. “I don’t think young people really think of him when they think of outrageous comedy now,” Exhibitor Relations’ senior analyst Jeff Bock told TheWrap. “How many kids today know who Ali G is?” he wondered, referring to the earnest but dopey poseur that put Baron Cohen on the map in the U.K. and in America via HBO more than a decade ago. The youngest members of the key 18-25 movie demographic group were eight years old when Cohen kidnapped Pamela Anderson by throwing a sack over her head and carrying her off for the Kazahk-style nuptials in “Borat.”

Also Read: 'The Brothers Grimsby' Is 'More Stupefying Than Funny,' and 10 Other Grim Reviews

In “Borat: Cultural Learnings of America for Make Benefit Glorious Nation of Kazakhstan,” the actor played a Kazahk journalist visiting America. He skewered every level of society with a mixture of deadpan vulgarity and violations of social taboos — nude, very hairy men bear wrestling, for example — that appalled but definitely amused moviegoers. Many saw rampant anti-Semitism in “Borat,” but Baron Cohen got away with it in part because he was the grandson of a Holocaust survivor and in part because the $18 million movie made $257 million at the global box office via Fox.

The most talked-about joke in the run-up to the “Grimsby” release — a Donald Trump character accidentally contracts AIDS — seemed more trouble than it was worth. “When you miss with his style of humor, it can be almost uncomfortable,” said Bock. “He might have gotten away with that as Borat, but it just didn’t fly today.”

3. Those Yawns From Critics Didn’t Help

Baron Cohen played the ninny brother of a secret agent dragooned to save the world in “The Brothers Grimsby,” which co-starred Mark Strong and Rebel Wilson. It came in with low expectations after it failed to take off in the U.K. The critics didn’t hate it — it’s at 50 percent “fresh” on Rotten Tomatoes — but their reaction may have hurt the film even more than pans: they yawned. Horrible reviews might have kick-started a contrarian kids movement. The veddy British nature of the film probably didn’t help in terms of selling it to teens and young adults in the U.S., either.

4. The Sony Hack and Regime Change

Sony picked up this British import from Paramount in 2014. Originally set for a 2015 release, “Grimsby” was pushed to this date after the Sony hack and subsequent executive shuffle between outgoing Amy Pascal and incoming Tom Rothman. “Grimsby” was essentially orphaned, although Sony distribution chief Rory Bruer told TheWrap Sunday that the weekend “was very disappointing, because Sacha made a funny movie and worked very hard and passionately to promote it, and the studio was proud of its marketing efforts on the film.”

5. Is Baron Cohen Becoming an Actor?

The star last appeared on the big screen in a critically acclaimed role as a memorably sleazy innkeeper in 2012’s “Les Miserables.” He also appears in Disney’s “Alice Through the Looking Glass” in May, and it’s possible that supporting or even starring roles that are more about the character than they are about Baron Cohen will become his specialty — and maybe then he’ll climb out of his mid-life film comedy crisis. “He still has a certain amount of currency, at least with an audience of a certain age group,” said Bock, “but he’s running out of that, I think. This is definite a transitional period for him, and you find yourself hoping that both he and Hollywood figure it out soon. He’s a talented guy, so I wouldn’t write him off just yet.”