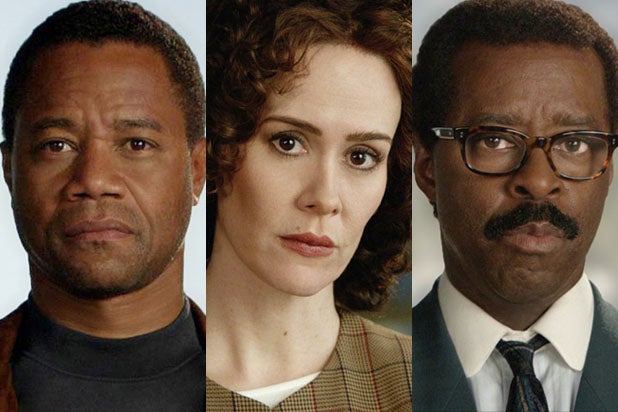 Roughly 20 years after the O.J. Simpson trial captivated the country, and made stars of all the players involved in the sensation, FX and provocateur Ryan Murphy are bringing him back via the limited series “The People v O.J. Simpson.”

Over the next ten weeks, we’ll rehash many of details of the tragic murders of Nicole Brown Simpson and Ron Goldman, consider the ensemble performances of Cuba Gooding Jr, Sarah Paulson and John Travolta and tweet about various Kardashian family cameos.

But first a peak behind the curtain on the Fox lot where producers Brad Simpson and Nina Jacobson of Color Force teed up this project, which ultimately became the flagship season in Murphy’s new anthology “American Crime Story.”

Simpson spoke with TheWrap about finding the source material for the project (Jeffrey Toobin’s “The Run of His Life: The People v O.J. Simpson”), he and Jacobson’s hopes and fears over partnering with Murphy and the lengths his actors went to “explode” everything we know about their real-life counterparts.

Simpson found “The Run of His Life” in a Vancover used book store in 2011 during production on “Diary of a Wimpy Kid: Rodrick Rules,” also produced by him and Jacobson.

“Nina and I are both big fans of long-form journalism, and Toobin is one of my favorite authors. I had no idea he made his name from the O.J. trial. I found it in a used book store and I tore through it,” he said.

Color Force started its first-look deal with FX in 2012. Simpson and Jacobson pitched the project as not about O.J. specifically, but “the people that served the case and what it did to America,” Simpson said.

“Turns out, the day before our meeting, [former Fox Broadcasting chairman] Kevin Riley said it might be time to revisit the O.J. trial.”

It was a matter of time before Murphy came calling, looking to start his own true crime anthology, a companion series to the hit “American Horror Story.”

“Nina and I were incredibly concerned that Ryan would devour us whole, but then we sat with them and it was the exact opposite. He was so solicitous, he really wanted a partnership and all our anxieties were eased. It was  real collaboration.”

While Murphy was game to collaborate, Simpson and Jacobson were already prepared to print Sarah Paulson‘s name on a dressing room in the role of Marcia Clark.

“I’ve never seen such a great match between performer and role. Ryan came to us and said, ‘What do you think about Sarah Paulson?’ —  as if we were going to have a choice… so we said we loved her and he said, ‘Great, I’ve already given her the script.”

Simpson said Paulson went so far as to wear Clark’s brand of perfume, devour her books and became highly sensitive to the criticism Clark famously endured for her appearance.

“The scene when she walks in with a bad haircut — the one people made fun of — Sarah took it very personally. Episode six is truly a great synthesis between a director and his actress who have worked together a long time and really achieve something extraordinary,” he said.

David Schwimmer‘s Robert Kardashian Is Not a Ratings Grab

E! was not responsible for introducing the ubiquitous Kardashian clan to America. The family’s late patriarch Robert was consigliere to O.J. and part of his much-touted legal Dream Team during the murder trial.

“Robert Kardashian is central to this case. He’s not a fringe figure. Robert Kardashian was O.J.’s best friend. He was the man who stood by O.J. When a lot of white, West Side [Los Angeles] friends fell off throughout the trial, he was there every step of the way next to him,” Simpson said.

“Part of the joy of taking a name that you think you know and showing another side of it — showing what a good father he was, showing what a man of faith he was and at the same time with the children. Kris Jenner was Nicole’s best friend. They were at the funeral.”

Courtney B. Vance’s blazing portrayal of fabulist defense attorney Johnnie Cochran will likely be divisive, and it’s meant to be.

“Like any great public figure he had both aspects. I like everybody else watched the trial and got very angry at Johnny. I was just as guilty of saying, ‘He’s a showman. He’s fooling people.’ And what I didn’t realize at the time was that Johnnie was a great lawyer and doing exactly what he needed to do given the composition of the jury that he had,” Simpson said.

“I think you come out the other side thinking something else — like, ‘This is who I want defending me in court for murder. But also, there’s a beating heart of sincerity underneath what he’s doing. That duality is what makes him interesting.”