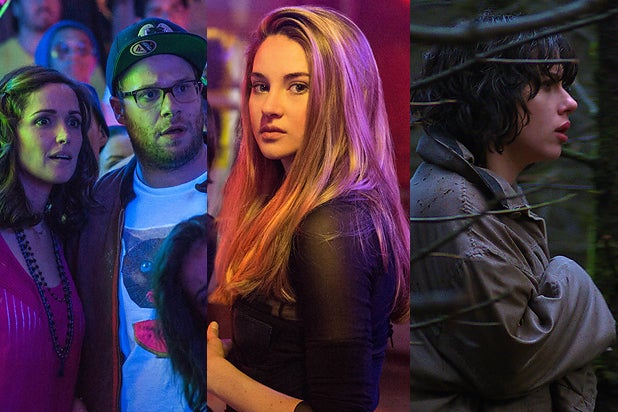 The box office seems an unlikely place to discover surprises and anomalies, but it’s actually almost always full of them.

From those having a bit of a moment (faith-based movies, Shailene Woodley) to those definitely not (horror movies, star-driven indies), here are five quirky and unexpected stories at the domestic box office of 2014 so far.

1. Grander than the Grand Budapest. Thought “The Grand Budapest Hotel” was the biggest indie movie of the year? While no slouch at $58 million, it was actually beaten out by a couple of movies you may have never heard of: faith-based dramas “Son of God” ($59 million) and “God’s Not Dead” ($60 million), as well as animated comedy “The Nut Job” ($64 million).

2. Believing in God trumps believing in ghosts. Faith-based dramas far outgrossed horror movies in 2014 thus far, with “Heaven is For Real” leading the pack with $90 million and “Son of God” and “God’s Not Dead” both near the $60 million range. The highest grossing horror movie of the year? “Paranormal Activity: The Marked Ones,” which has only made $32 million.

3. Star power can be a tricky thing. Indies headlined by big stars were no guarantee of box office success this year. Indies like “Locke” (starring Tom Hardy), “The Rover” (starring Guy Pearce and Robert Pattinson) and “Under the Skin” (starring Scarlett Johansson) were all trounced at the domestic box office by a Polish film called “Ida,” which came in just shy of $3 million.

4. Meet the new queen of YA. Shailene Woodley is currently the only person this year – male or female – to headline two films that have made over $100 million at the box office: “Divergent” ($150 million) and “The Fault in Our Stars” ($115 million and counting).

5. Audiences want more of the same. It’s definitely the age of sequels, remakes and reboots. Of the top 10 movies of 2014 thus far, only “Neighbors,” coming in at #10 with $148 million, isn’t based on a pre-existing property.