Congratulations, Brian Roberts! You’ve just bought a $30 billion media conglomerate that includes a legendary movie studio, a huge stake in the potentially revolutionary Hulu and one of the most successful collections of cable programming assets around. 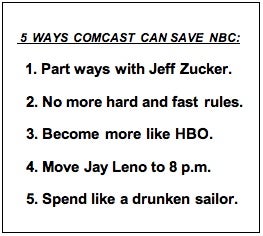 The once-proud Peacock in recent years has become the poster child for those who believe the network TV business model is just a few heartbeats from extinction. Before today’s announcement, more than a few pundits wondered aloud whether you might simply chuck NBC altogether.

But let’s assume you’re not ready to give up on the notion of broadcasting. Let’s imagine you still think there’s value in owning a brand with 70 years of history and entry into just about every home in America.

If that’s the case, there’s no reason NBC couldn’t yet find salvation.

Here are five suggestions for how to bring the network back from the brink:

1. Part ways with Jeff Zucker– or at least ban him from any oversight of the network.

Business historians will ultimately decide if Zucker was a good steward of the overall conglomerate known as NBC Universal. This much is true: Take out the performance of the broadcast network, and Zucker’s tenure at the Peacock has seen plenty of successes (and profits).

There’s a reason he’s risen so high in the GE culture: Zucker knows how to make money. And while he didn’t put Bonnie Hammer in charge of cable giants USA and Syfy, he wisely left her alone to expand her previous success (and tapped the awe-inspiring Lauren Zalaznick to transform Bravo into a powerhouse in its own right).

But this story is about what can be done to save the NBC television network. And quite simply, Zucker has done far more harm than good to that part of the business. 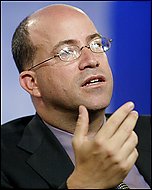 He needs to be taken out of the NBC Entertainment equation.

The problem began when then-NBC chief Bob Wright shipped Zucker from New York to Burbank and put him in charge of programming. It was a move not unlike Disney’s decision two decades ago to install a young Bob Iger at ABC Entertainment: You want your future leaders to understand the ins and outs of your core business.

But Iger wisely relied on the talents of programming deputies Ted Harbert and Stu Bloomberg, empowering them to run the day-to-day of the network. Peter Rice, another CEO-in-training, appears to be on a similar track at Fox right now.

Not Zucker. He didn’t get Hollywood, and Hollywood didn’t like him.

Not trusting any of his subordinates, Zucker micromanaged and second-guessed at every turn early on during his tenure. He extended the Peacock’s ratings supremacy in the short term– keeping "Friends" on the air two more seasons was a huge deal– but did nothing to build any new long-term franchises.

Things didn’t get better when Zucker moved back to New York. He wisely hired the talented Kevin Reilly to run development, but never empowered him to completely run the network.

Zucker finally appeared ready to cut the apron strings when Ben Silverman arrived. Unfortunately, while Zucker thought he was hiring Silverman to develop hits, Silverman was never interested in being a  mere D-boy. It was an epic miscommunication, one that extended NBC’s losing streak another two years.

As many talents as Zucker possesses — he’s super-smart, forward-thinking, quirkily charismatic and unafraid to take risks at a time of monumental change in the entertainment business — being responsible for the revival of a broadcast network just doesn’t suit him.

It’s hard to see how Zucker could stay on as CEO of the new company and yet somehow not have any say in the direction of NBC Entertainment. But if Comcast really thinks Zucker’s skills elsewhere in the company are worth keeping him, it should find a way to let someone else (Jeff Gaspin?) oversee the network.

The last decade at NBC has been marked by a series of epic pronouncements from on high about the future of television: Reality shows and newsmagazines must air at 8! Dramas at 10 don’t work! Cable is the future! No more dark and depressing shows — viewers only want "blue sky" programming!

The only thing these mandates have accomplished is to create artificial boxes for NBC’s West Coast executives, who too often have found themselves developing in an effort to live up to some bogus corporate mandate.

NBC needs to stop trying to fashion itself as some radical reformer of the broadcasting business and should instead get back to its basic mission: entertaining viewers with the best possible programming.

3. Become the HBO of broadcast TV.

Toward that end,  NBC should — without actually ever saying so — do all it can to transform itself into a network of ambitious, extraordinary and critically worshipped programs.

You know, the sort of stuff HBO does every day.

Making a move toward super-quality would immediately reconnect NBC with its 1980s and ’90s brand, when it was known mainly as the home of "Must-See TV" and the best shows on television. Even if ratings didn’t immediately soar, NBC’s sales teams could sell Madison Avenue on the upscale eyeballs first-rate programming tends to attract.

We’re not suggesting you go all artsy-fartsy. HBO (and, to a far lesser degree, Showtime) has proven that quality and populism can co-exist: Critics have raved about "True Blood" and "Dexter," even as both shows have inspired sizable (and passionate) fan bases. 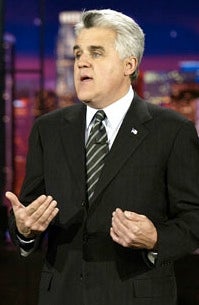 And NBC’s biggest success story in the past five years? Not "Heroes," which faded fast. Nope, it’s "The Office" — the little comedy that spent its first year struggling to find a pulse.

The strategy of Quality First might not have made sense a decade ago, when hit shows regularly drew more than 20 million or 25 million viewers. But in an era when a mid-3 rating in the key demographic is considered reason for celebration, NBC doesn’t need to worry that it’s passing up big numbers by defining its brand as first-class all the way.

Despite the fierce whining from writers and agents, the problem with NBC’s grand Leno experiment wasn’t the decision to eliminate five hours of scripted programming. No, that actually made sense — especially for a network that has trouble slotting even a dozen worthwhile hours of TV each week.

And installing Conan O’Brien as successor to Leno on "Tonight"? Also smart: Dave and Jay won’t be around forever, and when they’re gone, NBC will have the biggest star in late night.

The problem with Leno is that he rejected NBC’s initial idea, which was to have his primetime show kick off the night at 8 p.m.

It’s still too soon to make a definitive statement about Leno’s primetime performance. But The Chin’s weak ratings are clearly hurting local newscasts and, worse, deny  O’Brien any chance at success (CBS’ 10 p.m. shows give David Letterman three times as many viewers as a lead-in and promotional base).

In addition, the lack of a 10 p.m. timeslot means NBC has just five hours per week to do serious, groundbreaking drama. Right now, that’s not really a problem, but if the network starts a creative rebound, it soon would be.

So why not move Jay to 8 and make him the ringmaster of a big, funny variety show — an Ed Sullivan for our times? Why not introduce some reality show concepts as regular features, much the way Oprah Winfrey shamelessly apes "American Idol" with her annual singing competitions?

If Leno objects, NBC should simply break up with him. Even if it means eating the cost of his contract, Leno at 10 p.m. just isn’t a long-term play for the Peacock.

One of Zucker’s fatal flaws as an overseer of NBC has been his legendary impatience (and short attention span). The man who cut his teeth in the fast-paced world of morning news could never understand that you can’t turn around a broadcast network overnight.

Comcast needs to accept and embrace this go-slow reality if it truly wants to rehabilitate NBC.

Leslie Moonves took nearly five years to turn CBS into the frighteningly efficient ratings machine it is today. Steve McPherson had some success at ABC right out of the gate, but five years later, he’s still trying to recover from the mess he inherited.

There’s simply no quick path back to ratings glory. Networks are built show by show.

The Moonves and McPherson models also demand network chiefs act as if they have nothing to lose. And, perhaps, an unlimited amount of cash to spend.

Devoting millions of dollars to "Survivor" and "Big Brother" in the summer of 2000 probably struck most of Moonves’ peers at the time as a bit, well, desperate. Both shows now are part of CBS’ very foundation.

Moonves also was painted as a fool by many for shelling out crazy cash to convince Bill Cosby to return to the sitcom format. The show was never a megahit, but it brought buzz and viewers back to a network that seemed to be on the verge of collapse. 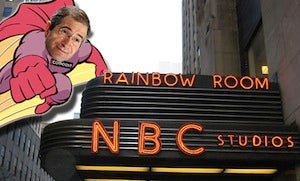 Likewise, it takes guts to schedule four new comedies on one night — but McPherson did just that this fall. So far, so good.

NBC in recent years has been all about maximizing profits and minimizing creative risk-taking. It was a philosophy that fit well for a network wholly owned by GE.

But the GE days will soon be over. In order to bring NBC back from the brink, Comcast needs to be willing to commit the time and money to doing the job right. It needs to pick a leader for the network it trusts and then give her or him plenty of time to turn things around.

Otherwise, Comcast might as well just pull the plug and let the Peacock die with dignity.