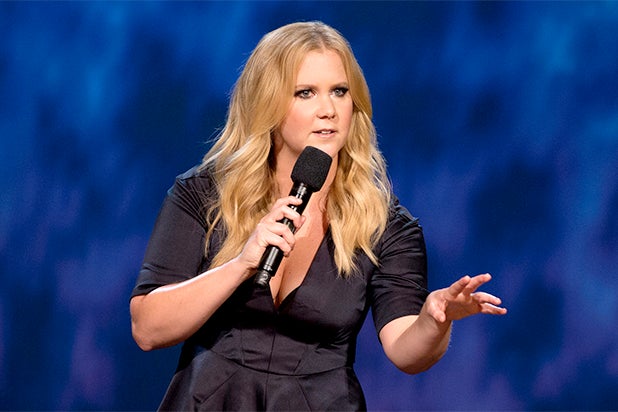 The comedian’s show, filmed at New York’s famed Apollo Theater and directed by Chris Rock, wasn’t for the prudish, as Schumer went deep into sex talk and introduced herself by stumbling on stage with a bottle of white wine, which she chugged throughout the set.

No one was off-limits as Schumer told her signature brand of raunchy jokes, mostly about getting laid — and worked in references to Oprah, Michelle Obama and Gandhi.

The outspoken comedy it-girl did more than just talk about peeing after sex. She used humor to bring attention to topics that have become hot button issues lately, including body image, the difference between how men and women are treated, and slut-shaming women who enjoy sex.

1. New York vs. Los Angeles
Schumer praised New York for its everyman attitude – “I can catch a D here pretty much whenevs” — and took a dig at L.A., particularly its endless stream of hot people.

“People don’t even see me there,” she said. “They’re just like, ‘is that a fat tumbleweed?’…. It got to the point where, someone tweeted about another actress, ‘she looks like a fat ‘ And I was like, ‘Yes!'”

“That movie is about talking animals. There’s a beaver and a penguin who are friends and talk about opening a bed and breakfast, but that’s not the most unrealistic part of that movie,” Schumer quipped. “[Dawson] should get an Oscar for that fucking movie. Let’s see Meryl [Streep] do that. I dare you, Meryl. Pretend like you’re dying to have deep dick you.”

3. “Trainwreck”
Schumer also candidly went after the people behind her hit movie “Trainwreck.” While she assumed someone like Blake Lively would end up playing the lead in the Judd Apatow-produced comedy, she was ecstatic to learn Universal wanted the comedian herself for the role.

However, when they said “be yourself,” they didn’t exactly mean it.

“We just need you to do three things,” she recalled execs saying to her. “One, just be yourself. Two, have fun. And three, stop eating food.”

“Oh, I get it, I’m not a real woman, I’m just harvesting organs for one,” Schumer said as she recalled the first time she saw the Sports Illustrated model. “So if Kate was ever like, ‘/my liver feels weird,’ I’d just be like, ‘Well, here’ and bleed out.”

The comedian also took issue with the double standard afforded to beautiful women, shared via anecdote of what happened when her friend met the model at . “She was actually really funny,” was his account of the meeting.

“No way,” Schumer retorted. “We just have such low expectations for hot people to be anything. You were probably just blown away [that] she wasn’t just sitting there playing with her tits and drooling. I was like, ‘What did she say that was so funny?’ and he said, ‘Well we were talking about playing pool later and she was like, Get ready to lose!’ Oh, when’s her hour-long special coming on HBO?”

5. “The sex comic”
Schumer addressed how she’s viewed in the comedy world, and attributed it to guys being allowed to talk about sex — and enjoy sex — but girls being taught to be afraid of it.

“I feel like a guy could get up here and literally pull his dick out and everybody would be like, ‘He’s a thinker,'” she joked.

She also talked about the different ways that men and women are taught about sex, and described the act as a fact of life, something every woman deals with, from Supreme Court justice Ruth Bader Ginsburg to First Lady Michelle Obama.

“We’re told over and over again, men love sex, and women just deal with it,” she said. “Every sitcom, it’s the guy coming home from work, ‘Honey, how about tonight, huh?’ and she’s always like, ‘Blech, you know I hate your dick,’ laundry, laundry. It’s insane. I don’t know any girls like that.”

“Amy Schumer Live at the Apollo” premiered Saturday at 10 p.m. ET on HBO.