The networks are having a good year launching new hits — but the upbeat buzz doesn’t extend to a number of familiar favorites.

A number of veteran shows are seeing some disturbing Nielsen declines, and some shows seem all but certain to fade away after this season.

It’s hard to see how NBC keeps up the expense of "Heroes," which, after a slew of relaunches, finally seems to have run out of lives.

Likewise, comedy fans everywhere are praying Fox will finally put "Til Death" out of its misery. And Joss Whedon has already told fans of "Dollhouse" that he’s planning to give the show’s last episode of the season finality.

Even at diminished levels, hits such as "CSI" and "Dancing With the Stars" remain tentpole players. They will be back next season, no matter what. But for others, the long-term future is cloudier.

These shows all have issues — be they creative, ratings-related, or both — that raise questions about just how long they’ll remain on the air.

These are shows TheWrap is putting on probation.

We’re not predicting imminent death — because it’s still early in the season, it’s not too late for these shows to reverse course. Cool guest casting, a killer plot line, a timeslot change — all could lead to reversals of fortunes.

So consider the following list of 5 shows on probation more of a warning shot than an obit.

Do you agree with our choices? Think we left a show off the list? Sound off in the comments: 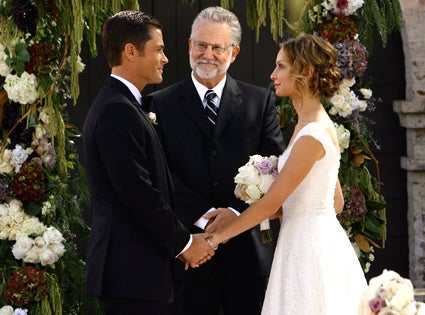 What the numbers say: Three weeks into the season, the family soap has fallen 23 percent in adults 18-49 from last fall’s numbers. It’s averaging about the same tune-in as it did in the May sweeps, however, and it still dominates its 10 p.m. hour in the demo.

Why it’s on probation:  With its oh-no-they-didn’t plotlines and unapologetic heartstring-pulling, "B&S" has always been a love-it-or-hate-it kind of show. Lately, those who dislike the Walker clan have been given plenty of fodder for their hate, with many accusing the series of losing complete touch with reality. Meanwhile, a just-introduced cancer storyline could either result in some acting Emmys, or completely overtake the show.

"It’s been over the top from the first minute and set itself up to have to keep going bigger and broader and more tragic and more ridiculous,"  Gail Pennington, TV critic for the St. Louis Post-Dispatch, told TheWrap. "I’d want a vacation from my own family if they had this many problems. Heart attack, marital strife and now cancer? Who’d blame viewers for running from this mess?"

What’s still working: One of the most talented casts on TV, led by Sally Field, means viewers can count on some first-class acting (even if the plots defy logic).

"I really think it’s unique to TV at the moment in its Zwick/Herskovitz 2.0 way — by adults, for adults," says Kate Aurthur, West Coast editor for the Daily Beast. "The acting is uniformly great, and it balances a family soap dynamic with both tear-jerking and humor: not easy."

Possible fix: A new timeslot. The real problem with "B&S" isn’t its ratings, or the fact that a large segment of viewers can’t stand it. It’s just that "Desperate Housewives" is a much broader, better-viewed drama, and "B&S" might no longer be the best show to take advantage the lead-in.

Why not let  "B&S" share the 10 p.m. Thursday hour with "Private Practice"? Or bring its loyal audience to 10 p.m. Tuesdays, where "The Forgotten" is doing fine, but ABC could use more eyeballs?

Prognosis: There’s no way "B&S" doesn’t return next season, but its ownership of the 10 p.m. Sunday timeslot  is very much in doubt. 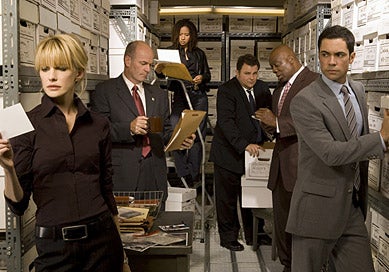 What the numbers say: Since moving to its new 10 p.m. Sunday slot last month, "CC" is down 22 percent vs. what it averaged at 9 p.m. last fall. Its overall viewership, however, is about the same as "The Unit," which aired Sundays at 10 p.m. last season.

Why it’s on probation: Really, there’s nothing inherently wrong with "CC." The show remains what it’s always been: A well-crafted procedural with a clever twist in which pop music from different eras is used to help push ahead the storyline.

But CBS came very close to cancelling "CC" last spring. And further Nielsen declines, combined with CBS’ overall strong schedule, means this series is likely to be vulnerable again come May. With so much working on the Eye, the network is going to need new timeslots to launch new dramas, and 10 p.m. Sunday is a very valuable one.

What’s still working: The musical hook on "CC" lets it stand out from the procedural pack and gives CBS a strong promotional tool to hype individual episodes.

Possible fix: A few years ago, Warner Bros. TV developed a drama that was to have been based on the music of a single artist. What if "CC" decided to find a way to do something similar, perhaps plotting out 10 episodes using only the music of Elton John?

Prognosis: It all depends on CBS’ drama development for 2010 — the better it is, the longer the odds.

What the numbers say: Actually, they’re pretty darn good. With all of Fox’s Sunday toon block rocking, "AmDad" is carrying its weight, up 24 percent in adults 18-49 vs. last fall. On the other hand, the show still loses a notable chunk of its "Family Guy" lead-in.

Why it’s on probation: The same reason Hitler started a war — Fox needs lebensraum. "Family Guy" is a monster, "The Cleveland Show" is young and mighty and renewed for two seasons, and "The Simpsons" — well, who can imagine a world without "The Simpsons"?

But actually, "The Simpsons" will go away eventually, and Fox needs to open up slots to test out new animated shows and build them into hits. That’s why "King of the Hill" went away, and why "AmDad" could eventually be in trouble.

And while it’s a very funny half-hour that played particularly well in the Bush era with some biting political humor, "AmDad" has never been able to break through and find its own place in the pop culture landscape, a la "The Simpsons" (d’oh!), "Family Guy" (giggity!) or even the late "King" (I tell you what).

What’s still working: As noted, the ratings are very solid. Plus, producer 20th Century Fox TV knows how to milk revenue out of all of its toon franchises, making the show financially attractive to all involved.

What’s more, launching new animated series is very tough. "AmDad," now in its fifth season, has a loyal audience that returns each week. Messing with that could be risky.

Plus, "AmDad" is from Seth MacFarlane, the creator of "Family Guy" and "Cleveland." Keeping him happy is a good thing.

Possible fix: Rather than just kill the franchise, Fox could go the "King of the Hill" route and slowly reduce "AmDad’s" episode order over a season or two. That way, Fox can test out new shows after "Family Guy" while still keeping a known hit on its bench.

Prognosis: Very good, particularly in the short-term. But "AmDad" could be entering the home stretch. 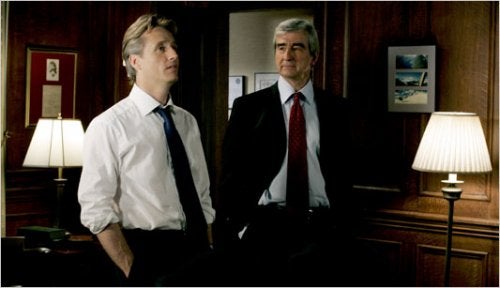 What the numbers say: Not surprisingly, a shift to 8 p.m. Fridays has been devastating to the show’s audience levels. "L&O" is down more than 30 percent from what it averaged last season on Wednesday nights. The good news: Viewers who can’t be home on Fridays are recording it in a big way– during premiere week, its ratings jumped 33 percent when DVR data was included.

Why it’s on probation: Because it sometimes seems as if NBC is determined to kill this show — and one day, it might just get its wish. Expanding to three editions was smart; making hundreds of millions in profit by syndicating the show’s repeats all over cable (and elsewhere) a no-brainer.

But in the past seven years or so, the Peacock has given "L&O" little respect, moving it to random timeslots and treating repeats of the show as if they were plaster designed to fill every hole in its schedule (Fridays at 8? Really?)

Of course, in fairness, we are talking about a show that’s been on for 20 years. In TV terms, that’s like 100. It’s only natural the show would be fading.

"There’s no reason to watch it anymore," Pennington argues. "It’s told every possible story every way it possibly can, and even ripping from the headlines feels tired. "

"The fact is: Most shows never stay on the air this long, competing not only with its spinoffs for attention but also 20 years worth of constantly running repeats on various cable outlets," Roush says. "You can’t expect a show like this to pack heat forever; not even ‘ER’ could keep it up. What’s so surprising is how good it is again these days.

Possible fix: A better, 9 p.m. timeslot. Patience. And maybe a radical stunt to get old fans to check back in. Before 9/11, creator Dick Wolf planned an "L&O" mini-movie event designed to play out over multiple nights. Why not revive that concept as a (re)launching pad for the show?

Prognosis: Decent but by no means certain. 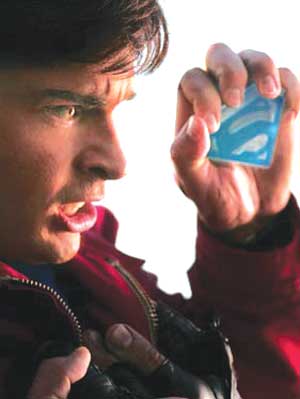 What the numbers say: Three weeks into the season, the show is down 31 percent from its first three episodes last season. But back then, it was airing on Thursdays; now, "Smallville" has been banished to Fridays. On the positive side, the show has boosted the CW’s Friday numbers by 38 percent over the comedies that aired on Fridays last fall.

Why it’s on probation: It’s old (season nine). Virtually all of the original cast has flown away. It costs a lot of money to produce. And, really, how many Superman origin stories can one series tell?

At some point, it’s going to make sense for the CW to trade the stability that comes with a long-running show to devote its limited resources to a new sci-fi-tinged series, possibly even one from the D.C. comics library. Personally, we’re still waiting for "Wonder Twins: The Series." Shape of… a hit!

Possible fix: At this point, we’re out of ideas for how to save "Smallville" as it currently exists. That doesn’t mean producers couldn’t move Superman into a new setting (he’s very mobile, what with the flying and all) with new supporting characters and a fresh mission.

Prognosis: It’s hard to see this show returning for another year, barring a total collapse of the CW’s development slate.