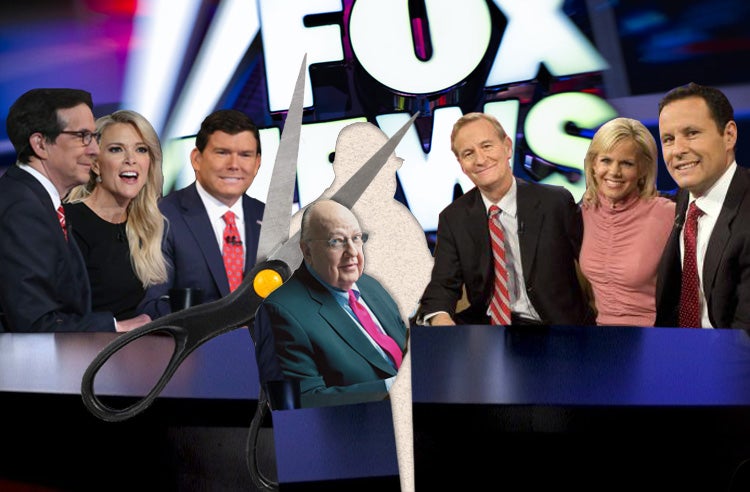 Roger Ailes has been the most powerful person in cable news for so long, it sometimes seemed the title would be his forever.

But now Ailes, the co-founder and longtime boss of No. 1-rated Fox News Channel, is negotiating his exit from the company, according to one of his lawyers, effectively ending one of the most storied career chapters in TV history. Former Fox News host Gretchen Carlson sent the company reeling on July 6 when she filed a lawsuit claiming Ailes had sexually harassed her. 21st Century Fox, the parent company of Fox News, subsequently began an internal investigation.

Ailes, 76, started reinventing the cable news business 20 years ago, when he and News Corp. billionaire Rupert Murdoch envisioned a channel that could reach viewers turned off by mainstream news coverage. His exit will have far-reaching impacts on some of the best-known figures in the news business, at the network he shaped and beyond.

O’Reilly has yet to say publicly what he might do if Ailes were to exit. But one person close to the situation said that the host of “The O’Reilly Factor” might bail if his boss leaves. Years ago, when O’Reilly’s program was foundering during Fox News’ early years, Ailes stuck with O’Reilly and even upgraded his time slot, eventually helping the show rise to No. 1 in cable news.

O’Reilly might want to repay that loyalty now, depriving Fox of its top-rated show. There is concern at the network that other top talent might leap too, including Sean Hannity and Greta Van Susteren.

Kelly was, until very recently, missing from the Ailes saga. While other women of Fox News stepped forward to speak on Ailes’ behalf, the star anchor — who famously tussled with Donald Trump over his treatment of women — remained conspicuously silent.

This week, a report surfaced that Kelly had told lawyers she too had been sexually harassed by Ailes, whom she had praised as recently as a few months ago as an invaluable booster. Ailes denied harassing her, just as he has denied all other allegations.

Kelly has made no secret of her ambitions beyond Fox News: Earlier this year, she hosted a prime time interview special on the Fox broadcast network to test her bona fides as the next Diane Sawyer. Ratings and reviews weren’t great, but Kelly is very likely looking toward her next mountain to climb, and if Fox News finds itself in the midst of a messy transition, the company might be too distracted to stop her.

3. A Test for the Murdochs

The Ailes scandal is the first major managerial test for Lachlan and James Murdoch, Rupert’s sons, who are assuming day-to-day control of 21st Century Fox. Ailes, famous for his sarcastic put-downs, has taken a jaundiced view of the Murdoch kids, treating them more as princelings than as kings to whom homage must be paid. If Ailes is out, investors will naturally wonder about the long-term health of 21st Century Fox, which derives up to one-fifth of its revenue from Fox News.

There may also be questions about their abilities to manage a major crisis. After Carlson sued, the Murdochs quickly announced the internal investigation, a move that is said to have enraged Ailes. For what it’s worth, internal investigations aren’t really Rupert Murdoch’s style, so the Ailes scandal is a strong sign that the 85-year-old billionaire really has handed over the reins to his company.

CNN, the network founded by Ted Turner in 1980, has had no greater foe than Ailes. When Fox News began beating its archrival in the ratings in the early 2000s, Ailes bought billboards trumpeting the achievement right across from CNN Center in Atlanta. Under Jeff Zucker, CNN has in recent years recovered a bit of ratings momentum — but it hasn’t come close to replacing Fox News as the No. 1 cable news leader.

That’s partly because CNN has never found an effective way to counter the lure of opinion in prime time, which Ailes has exploited with talents such as O’Reilly and Hannity. If Fox News post-Ailes loses some of its top talent, or refocuses its strategy, CNN may have one of its best opportunities in years to recapture the ratings crown. And if nothing else, CNN will no longer have to endure barbs from one of its sharpest critics.

Also Read: Gretchen Carlson on Sexual Harassment: 'We Will Not Be Silenced' (Video)

5. Donald Trump and the GOP

It’s fitting that Ailes’ Waterloo came during GOP national convention week, which officially crowned occasional Fox News nemesis Donald Trump as the Republican presidential nominee. Trump has been one of the very few top Republicans willing to openly attack Fox News, with his feud with Kelly attracting headlines for much of last year. This is a marked change from a decade ago, when officials in the George W. Bush administration gave the network exclusive interviews and lauded it as their channel of choice.

In this, as in so many other ways, Trump may have reframed the discussion. Ailes’ roots in the GOP extend back to his days as a Richard M. Nixon adviser in the 1960s. But in Trump’s rise, Ailes has been sent back against the ropes by another septuagenarian with a surer common touch and better show-biz chops.

In that sense, maybe Ailes is getting out at exactly the right time.