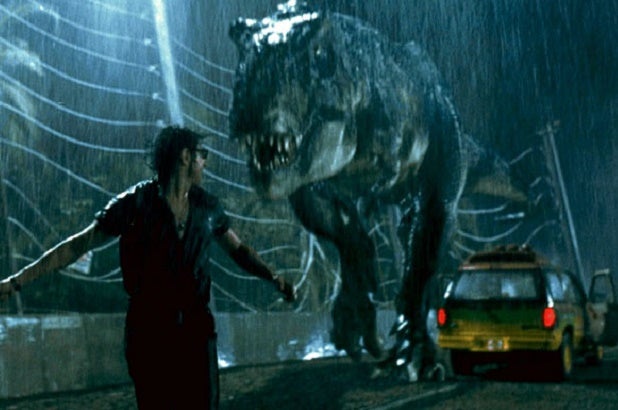 It has been 22 years since the original “Jurassic Park” became a huge box office hit, so many younger moviegoers aren’t familiar with it. But the impact of its thundering dinosaurs is still being seen, felt and heard in Hollywood and in movie theaters around the world.

Director Steven Spielberg‘s imagining of Michael Crichton’s bestselling sci-fi novel about genetically replicated reptiles rampaging through a theme park, adapted by David Koepp, was a game-changer for the film industry.

“The mix of a bestselling book, transferred to script by one of Hollywood’s best writers, in the creative hands of the world’s greatest storytellers and what can you achieve?” Gerald Molen, who produced with Kathleen Kennedy, asked TheWrap rhetorically, adding. “The answer is greatness.”

The 1993 dinosaur blockbuster revolutionized the way movies were made, marketed and distributed with pioneering technology, concepts and strategies that are still employed today.

Leaping Lizards
The velociraptor and other dinosaurs were created through a groundbreaking process that took more than a year, by combining computer-generated images created by ‘ Industry Light & Magic and life-sized animatronic models built by Stan Winston’s team (below). “A major gap has been crossed and things are never going to be the same,” Lucas said at the time, and he was right. CGI imagery has been a primary component of sci-fi, adventure and fantasy films ever since.

Sound and Fury
“I remember it scaring the hell out of me,” said Jeff Bock, Exhibitor Relations Co.’s senior media analyst. “The dinosaurs looked so real, and I recall seeing and hearing them breathe and getting the chills. It was a very visceral experience.” The unprecedented resonance, depth and clarity of the film’s audio was created by DTS, a company Spielberg invested in specifically for “Jurassic World.” The rib-rattling digital surround sound effects it created were unprecedented, and made many moviegoers aware for the first time just how much sound, and sound editing could mean to a movie.

Dino-Might
The “” marketing campaign, which cost a then-staggering $65 million and included pre-release licensing deals with more than 100 companies, created massive upfront demand. That was no small feat for a non-sequel and it established a template that remains relevant to modern film marketing teams. Dinosaur toys replaced teddy bears, baseball cards and Barbies in the hearts of American kids, and they’re still popular.

Concept Over Stars
“No one came to see because of Sam Neill or Jeff Goldblum,” said Bock, “though both of them and everybody else in it were terrific.” No one’s name, not even Spielberg’s, was above the title on the marquee, and that was the precursor to today’s superhero sagas like “The Avengers” and high-concept tales, where the idea for the film, rather than the name on the marquee, is what drives business. For the record, Richard Attenborough, Laura Dern and Samuel L. Jackson made up the rest of the cast.

Going Global
was the first movie to make more than $800 million worldwide and earn more at the box office abroad than it did domestically. That remains the rule today, with most American blockbuster movies making more — usually about 65-70 percent of their overall take — overseas than they do at home.

Some things were very different, however. When it opened in 2,586 theaters on June 11, 1993, “” took in $47.1 million dollars. That wound up being around 13 percent of its $350 million domestic gross because it played strongly for more than two months. Today’s blockbusters are far more front-loaded.

grossed $921.6 million worldwide and became the highest-grossing film ever, topping Spielberg’s “E.T.” It  crossed a major milestone and went up to $1.04 billion in 2013 thanks to a 3D re-release that did major business in China. Hollywood was paying attention to that, too.