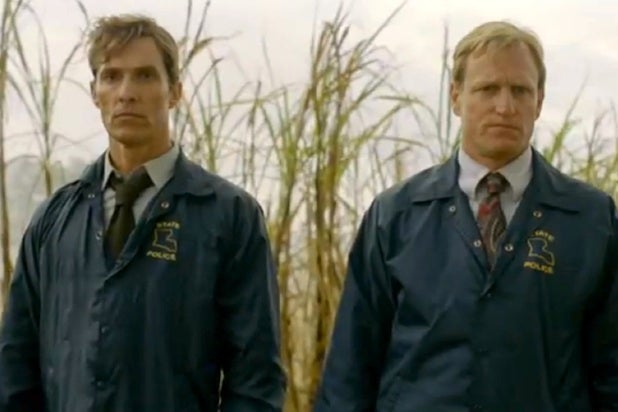 Oh sure. Six episodes into “True Detective,” it feels like we should just hold the Emmys now and we should get down to debating where it stands in the pantheon of the Greatest Shows Ever.

There’s just one problem: You can’t judge a detective drama until you see how it resolves its big mystery. Remember how much people liked “The Killing” once? Remember how betrayed they felt by the way its first season ended? “True Detective” mastermind Nic Pizzolatto co-wrote the season finale for “The Killing.” (He has said he was carrying out the vision of that show’s creator.)

As good as “True Detective” is now, it still needs to stick the landing in its last two episodes. We’re confident it will. But here are five ways it could still blow it:

1. Matthew McConaughey‘s character did it.
By “it” we mean “killed all those people.” The show hinted from the very beginning that McConaughey’s Rust Cohl was the real killer, even before his interrogators flat out accused him. For the show to make him the actual bad guy would be exactly what we aren’t expecting, because it’s so obviously what we’re expecting. Then again, maybe “True Detective” could pull this off, if we realize at the end we haven’t been watching a mystery at all – just the story of two cops disintegrating. But we think “True Detective” will find a way to surprise. The best part of the show is how hard it works for viewers respect, even when it doesn’t need to. We’d tune in to watch its stars eat cereal.

2. Woody Harrelson‘s character did it.
Marty Hart is flawed, but flawed in the way humans are flawed. Cohl is messed up in an almost ethereal way. It would be less depressing to drive around in a squad car with the devil himself.

3. Michelle Monaghan‘s character did it.
There’s no way this would happen, right? We realized last week what a gifted manipulator Maggie is, but to make her the killer would be ridiculous. Right?

4. Explaining the Yellow King too soon.
The show’s many references to Robert Chambers’s “The King in Yellow” have helped move the 1895 short story collection to the top of Amazon’s sales chart.  But in the book, the king isn’t even a background character. “The Yellow King” is the title of a play within the book that makes people who read it go mad. Since “True Detective” is planned as an anthology, why not keep the idea of the Yellow King around for a while?

5. Worrying about what anyone thinks.
There’s a big caveat to the rest of this list: We have a feeling Pizzolatto knows exactly what he’s doing. The actors on the show got to read all eight of his episodes before they signed on, and we don’t think he would have drawn the talent he did without a brilliant ending.

(For the record: A previous version of this story said Nic Pizzolatto did not write the Season 1 finale of “The Killing.” In fact, he co-wrote it.)