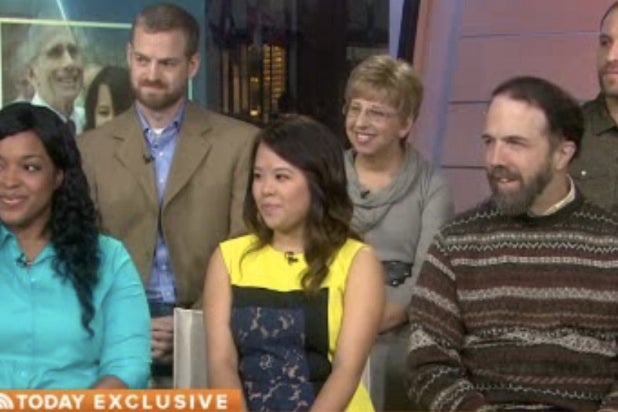 There’s things to be thankful for, and then there’s being thankful to be alive.

“I think God saved my life, and I have responsibility to use my life in a way that’s glorifying to him and a way that’s helpful to other people,” Dr. Kent Bradley– who donated plasma to four of the Ebola survivors sitting beside him on-set, Dr. Rick Sacra, Nina Pham, Amber Vinson, and Ashoka Mukp–said.

“It’s just so amazing that you gave so much to all of us,” Mukpo said to Dr. Bradley.

“He’s a selfless man; he’s like our angel and gave us a second chance at life,” Pham said to Bradley.

Another survivor on-set, Nancy Writebol, donated plasma to New York City Ebola survivor, Dr. Craig Spencer because she was a blood-type match. Spencer was not on “Today” Wednesday.

Each one of these individual were subjects of media firestorms over the deadly virus, with broadcast and cable news networks going wall-to-wall with updates on their respective conditions and whether people they had come in contact were affected.

The first Ebola patient in the U.S.–Thomas Eric Duncan–was unfortunately not as lucky as the six survivors on “Today.” After returning to the U.S. from Liberia, Duncan fell ill. He originally went to Texas Health Presbyterian Hospital with a fever, telling doctors he was recently in Liberia. He was sent home. After his family called the Center for Disease Control, he was submitted to the hospital, but died weeks later.

Of course, there a thousands in West Africa who were not as lucky as the six survivors on “Today” this morning, as Liberia and other countries were ravaged with death due to the spread of the disease and lack of resources.