The producers of "American Idol" reportedly tried to book him for their upcoming charity show. CBS and the folks behind the Tonys made a bid to have him host Broadway’s biggest night.

Neither of these panned out, of course, because O’Brien is sort of busy right now, getting ready for his nationwide comedy tour. And if all goes well, he could soon be preparing for a return to late-night via a new show at Fox.

But if talks with Fox drag on, O’Brien could soon be looking for ways to stay in the public eye (other than his daily Tweets, of course). If so, we’ve come up with six new gigs that could keep O’Brien working — and on the pop culture radar: 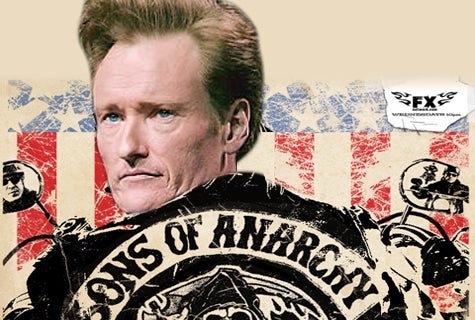 NBC has the rights to this year’s primetime Emmys, which rules out O’Brien as host of the Big Show. So why not tackle Emmy’s neglected kid sister, which focuses on soaps, game shows and Jerry Springer?

The Daytime Emmys are currently without a home, so landing O’Brien would immediately spark a bidding war among other networks for the right to air the show. And Conan could even host the event as his telenovela-friendly alter-ego, Conando. Win-win!

OK, so most of Conan’s acting gigs have been on comedies (most recently in sidekick Andy Richter’s "Andy Barker, PI"). But as he proved in numerous comedy sketches over the years, O’Brien knows how to handle a (fake) gun. We think he’d be awesome as a villain on FX’s biker drama — and apparently, so does "SOA" creator Kurt Sutter. A few months ago, he used his blog to extend an invite to O’Brien to appear on his show.

"We have an IRA story line that will continue to play out this coming season and I could use a bad-ass O’Brien on my team," Sutter wrote. "Guns, blood, fist fights — you could really work some shit out. Think about it."

3. Team up with Andy Richter and join the next edition of "The Amazing Race."

Next month’s tour could serve as a warm-up for an even more awesome international adventure. Plus, after surviving your last few months at NBC, being clever and crafty on a TV competition should be a walk in the park.

4. Move to Finland and make a bid for the presidency.

The Finns already know and love you since you’re a dead ringer for their current head of state, Tarja Halonen. You visited the country years ago and were greeted as a hero. Now’s the time to make all that good will pay off by bringing Coco and Change to the people of Finland. Yes you can!

She needs an image rehab. You need a job (and are great with kids). Seriously, this is a no-brainer.

Since you’re an alum, it’s sort of surprising that Lorne Michaels hadn’t already asked you to host before   has only asked you to host once before, all the way back in 2001. Maybe you were too busy working on your own job. No matter: You’ve got the time now, as well as the buzz. And if people power can get Betty White the gig, the Army of Coco-ites could surely mobilize on your behalf — even if NBC brass cringed at the notion of giving O’Brien free PR on NBC. We bet Tom Hanks would even be willing to show up for a reprise of "The Five Timers Club" sketch you guys appeared together in back in 1988.