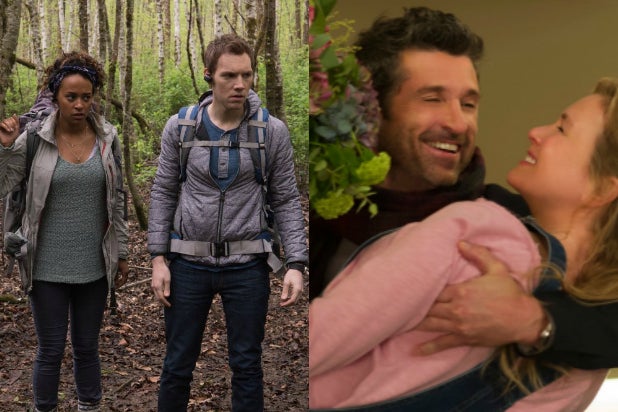 This weekend’s box office tally shifted dramatically as predictions were far from reality. The biggest miscalculations were over “Blair Witch” — initially expected to top $22 million and come in at No. 1 — and “Bridget Jones’s Baby,” which was expected to bring in more than $14 million.

Neither came to pass, as Lionsgate’s scary movie sequel made only an estimated $9.7 million — more than 55 percent lower than predictions made early last week.

“Bridget Jones’s Baby” is on shaky ground as it was made for $35 million, not counting marketing costs. “Blair Witch” was made for just $5 million and is still positioned to turn a profit. “However, the reaction is such that Lionsgate will likely burn the franchise at the stake as it’s just not worth their investment,” said Jeff Bock, senior analyst at Exhibitor Relations.

So why did both titles swing hard and miss?

1. Both sequels are “past their prime.”
“The Blair Witch Project” was a massive sleeper hit in 1999, and “Bridget Jones’s Diary” proved popular in 2001. “They are three-quels that are well past their prime in terms of awareness,” said Bock. “This is a case where audiences certainly weren’t clamoring for more sequels.”

2. Plus, it’s been way too long since the last ones.
Too much time has passed since the last “Blair Witch” movie, 2000’s “Book of Shadows,” which made only $26.4 million domestically against a $15 million production budget. The same goes for “Bridget Jones,” as “Edge of Reason” came out in 2004 and made only $40.2 million in North America off a $40 million budget. (Though the film played robustly overseas, earning $222.3 million internationally.)

3. There are too many horror movies.
As far as “Blair Witch,” there are simply too many horror movies and thrillers in the marketplace, as “Don’t Breathe” continues to show unexpected staying power and “When the Bough Breaks” and “The Disappointments Room” are also competing for audience attention. Off a summer season that was loaded with scary movies, like “Lights Out,” “The Conjuring 2,” “The Purge: Election Year” and even “The Shallows,” ticket buyers have pretty much satisfied their desire for a fright.

4. Bridget Jones plays better in the U.K.
Zellweger’s famed character has more relevance across the pond, where Bridget Jones is “a national treasure,” said comScore senior analyst Paul Dergarabedian. In the U.K. and Ireland, “Bridget Jones’s Baby” opened at No. 1 with $11.3 million, making it the U.K.’s biggest rom-com opening weekend on record. Proving the franchise plays better internationally, it opened to $30 million in 39 territories overseas.

5. Trackers put too much stock in brand names.
Awareness for the two titles was inflated among box office trackers. The fact that both movies represent known intellectual properties artificially boosted confidence and distorted predictions.

6. September is a dumping ground.
The success of “Sully” has gone against conventional wisdom — far exceeding predictions two weekends in a row. But, when it comes to “Blair Witch” and the “Bridget Jones” sequel, Bock told TheWrap that high initial estimates on both titles represented a rare time when trackers got it wrong — really wrong. “Did everyone forget this is September? This is where most films go to die,” he said.

7. Rom-coms are still dead.
Traditional rom-coms like “Sleepless in Seattle” and “What Women Want” were laid to rest about three years ago with box office bombs that included 2013’s “About Time” and 2011’s “Arthur” remake. They can’t be resurrected — in North America at least — where romantic storylines are treated as the b-plot in recent comedy hits including STX’s “Bad Moms” and even “Deadpool.” Also, when it comes to romantic fare, younger audiences are drawn more to weepy dramas these days, like “The Fault in Our Stars” and “Me Before You.”

TheWrap takes a look back at the 17 years of shaky, grainy camera footage that began with “The Blair Witch Project” in 1999

Though "The Blair Witch Project" didn't invent the found footage horror genre (that is often attributed to "Cannibal Holocaust") it helped popularize it and became the predecessor for some of the most popular fright flicks of the 21st Century. With the trend coming full circle with "Blair Witch," let's look back at some of the most notable films to use this grainy style.