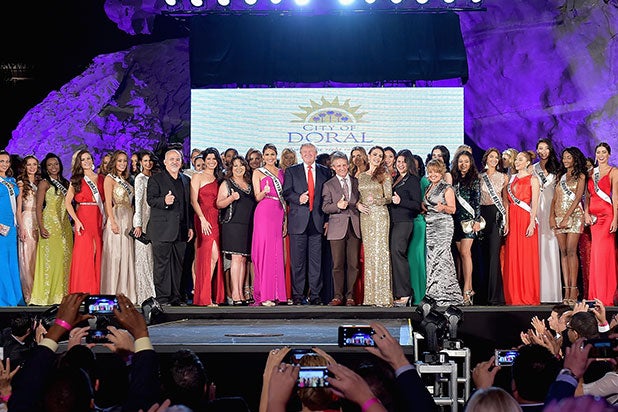 Donald Trump’s alleged inappropriate behavior towards women is front and center in a New York Times piece, in which the newspaper analyzes his interactions with employees, former Miss Universe contestants and his former wife, Ivana.

For the article titled “Crossing the Line,” the publication interviewed “dozens of women” who have worked for the presidential candidate over the past 40 years, conducting 50 interviews over the span of six weeks. Their accounts revealed Trump’s derogatory nicknames, negative comments on appearances and inappropriate interactions between him and many women he worked with, according to the report.

Trump has denied most of the allegations in the New York Times story except one, and has previously described himself as a “champion of women,” claiming that “nobody respects women more” than he does.

“A lot of things get made up over the years,” he told the New York Times. “I have always treated women with great respect. And women will tell you that.”

See below for seven revelations from the exposé, and read the full story here.

1. Trump would parade women around his mansions

Rowanne Brewer Lane claimed that she met Trump when she was 26 at a pool party at Mar-a-Lago, his estate in Palm Beach, Florida. He allegedly told her to put on a swimsuit and paraded her around the mansion, claiming “That is a stunning Trump girl, isn’t it?”

Trump disputed the claim, telling the Times that, “a lot of things get made up over the years. I have always treated women with great respect. And women will tell you that.”

2. He would comment on women’s appearances, calling them “fat” and “ugly”

Trump apparently told a female contestant on “The Celebrity Apprentice,” “That must be a pretty picture, you dropping to your knees,” while he told Rosie O’Donnell she had a “fat, ugly face.” He also allegedly told an overweight female executive who oversaw construction of his headquarters, “you like your candy.”

One former Miss Universe contestant gained weight after her stint on the beauty contest and Trump publicly shamed her, exposing her to media outlets when she went to the gym after she asked the president of Miss Universe for help her slim down.

3. He was a “Ladies’ Man” at boarding school

“Donald was extremely sensitive to whether or not the women he invited to campus were pretty,” recalled a fellow student, George White. “For Donald, it’s display,” he said.

Even his yearbook photo was captioned with “Ladies’ Man: TRUMP,” his classmates having him crowned that after he brought a variety of “pretty women, very sophisticated women” to the school.

4. His father was very controlling about women as well

According to the exposé, Fred C. Trump was a big role model for Donald in terms of how to treat women. In a previously unpublished interview with the author of “The Truth About Trump,” his former wife Ivana Trump recalled dinner one night in the late 1970s, where she made the mistake of ordering what she wanted while at a restaurant with Trump’s parents.

Trump defended his father, saying that he only said that “out of love” and that it “would be better for her.”

Fred Trump also reportedly didn’t like that Donald hired a woman, Barbara A. Res, as his head of construction in the 1980s either.

“Fred did not like the idea that Donald had hired me. ‘A woman?’ Donald told me that,” Res told the New York Times. “But I could tell by the way Fred treated me. He used to say that all the time: ‘You don’t know what you are talking about.’ When I would complain to Donald about Fred, he would say, ‘Fred didn’t want me to hire you or didn’t think it was a woman’s job.'”

Temple Taggart, the 21-year-old Miss Utah, told the New York Times that in 1997, Trump introduced himself by kissing her directly on the lips.

“He kissed me directly on the lips. I thought, ‘Oh my God, gross.’ He was married to Marla Maples at the time,” Taggart said. “I think there were a few other girls that he kissed on the mouth. I was like ‘Wow, that’s inappropriate.'”

Although Trump disputed this, Taggart said that it happened again after he told her she had to lie about her age to “get ahead in the industry.”

He allegedly also acted inappropriately towards women in meetings, said the story. Former pageant promoter Jill Harth recalled a time in which she was in a meeting with Trump and her boyfriend, who was doing a presentation. Trump interrupted him and asked “Are you sleeping with her?” only to tell him he is “going after her.”

6. He wanted people to think he only worked with beautiful women

Res recalled an incident in which she asked a girl to get lunch for a meeting, but Trump stopped her and asked another woman to get lunch.

“That was purely about looks,” she said. “He wanted the people in that room to think that all the women who worked for him were beautiful.”

He would also brag about his dates, telling deputy mayor Barbara J. Fife in the early 1990s that he had “this great date tonight with a model for Victoria’s Secret.”

According to the NYT story, Trump would use “dismissive” nicknames for his female employees, calling them “hon” and “dear.”

“Things he wouldn’t have said to a man,” said former deputy mayor Alair A. Townsend. “It was designed to make you feel small. And he did that repeatedly.”