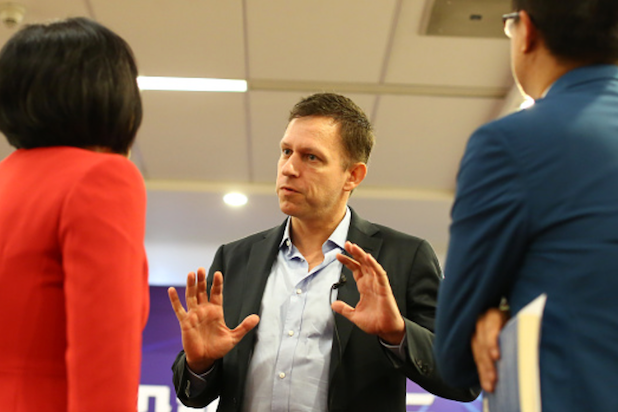 Peter Thiel’s takedown of Gawker may be legal, but it’s definitely not ethical. That’s the conclusion of  writers who took to the ramparts on Friday to argue why the vengeful venture capitalist’s campaign is a menace to free expression.

Oh yeah, Silicon Valley is a problem too, they said.

Thiel set out to destroy Gawker by using his fortune to fund the lawsuit  brought by Hulk Hogan, which resulted in a jury ordering the media company to pay the former WWE star $140 million in damages. Here’s what some writers say is wrong with that:

Wrote Elizabeth Spiers, the co-founder and one-time editor of Gawker, on Medium:

On the one hand, you have to admire Thiel’s sheer and apparently unending determination to make Denton and Gawker pay for coverage he didn’t like – it’s Olympic level grudge-holding. But the retribution is incredibly disproportionate in a way that seems almost unhinged. It would be hard to argue that Thiel was materially damaged by Gawker’s coverage in the way that he’s now trying to damage Gawker. His personal finances haven’t been destroyed and even the most egregious things Gawker has written haven’t put literally everyone who works for Thiel out of a job. (What did Lifehacker ever do to Peter Thiel?) And given his hard libertarian tendencies, it should at least make him uncomfortable in a very prickly way to utilize government bureaucracy to put a capitalistic enterprise out of business.

Truth #2: Tech media hasn’t been doing its job — and this is the fallout

Journalists in Silicon Valley have been unwilling to be critical of the geniuses they cover. As a result, Valleywag — a blog that didn’t play that game — was a necessary rather than excessive response.

Spiers: “Journalists who haven’t worked in tech themselves are sometimes genuinely and sincerely enamored with the promise of what they’re looking at and are so dazzled that they fail to ask the questions they should. Some of them are lazy and it’s always easier as a journalist to write the glowing lightweight story, where no one’s going to press you to nail down the facts and you won’t get any blowback from sources or subjects. Ultimately, this has created a sense of entitlement in the industry where denizens of Silicon Valley expect the media to actively support them and any negative portrayals are met with real anger and resentment, even when they’re 100% accurate. And it’s never the media’s job to support the industry – that’s PR. It’s the media’s job to cover it, the good and the bad.”

“We’ve all been pushed down in America. Our only hope is the media, artists and us. The media has to keep the transgressors accountable … Instead, the press prints glowing reviews of everybody with a buck, they’re the ones who built up not only Trump, but every Silicon Valley “disrupter.”

“We may not be able to prosecute Peter Thiel, but we can shame him. We can refuse to do business with him. We can mention his shenanigans every time his name comes up. But we won’t. Because we revere the business titans. They’re stars.”

The key question here relates to precedent. Do you think the Hogan case will set precedent — either explicitly through the legal system or implicitly through a culture of fear — that will chill other publishers who have better reasons for posting private information about public figures? Do you think Thiel’s strategy of using his billions to back a potentially endless number of lawsuits that will crush Gawker beneath legal fees and judgments will go unnoticed by other plutocrats with less defensible vendettas and targets?”

He added: “What’s endangering Gawker is Thiel’s endless resources, and his apparently limitless appetite for revenge. Those tools can be used by anyone with enough money, against any media target they choose, for any slight they perceive.”

Spiers agrees: “If you write down the entire value of the Gawker properties on the basis of their worst posts, you fail to appreciate what it does that’s good and why that kind of journalism is necessary.”

Says Salon’s Will Oremus: “The most persuasive criticism of his actions is that they establish a dangerous road map for billionaires to muzzle unfriendly media coverage.”

Bullies often use force to get money. Thiel is using money as force.

Money is not a muzzle, explains Slate’s Will Oremus:

On the contrary, he says: Thiel’s previously secret, high-stakes war on Gawker is the strongest possible argument for Valleywag’s existence.”

Neither million dollar lawsuits nor hush money should be able to silence the press, but Thiel is flexing his muscles and bragging he’s beyond the First Amendment, and instead championing the right to privacy, the Fourth Amendment.

To borrow Thiel’s concept, Valleywag served as a deterrent to the worst excesses of tech titans’ hypocrisy. Its outsider perspective helped to counteract the groupthink that so often leads techies into folly. It was especially essential because, while tech journalism has proliferated along with the industry’s boom, that expansion has largely been driven by demand from advertisers for largely positive, inoffensive content that’s friendly to the placement of ads for expensive gadgets. Hence the fawning coverage of a company such as Theranos that turned out to be misrepresenting its products and is now the subject of a criminal probe. There are still a few outlets that train a skeptical eye on tech companies’ claims, including the Wall Street Journal, which broke the Theranos story (and got called a “tabloid” for doing it). But the loss of Valleywag made it one fewer, and now Gizmodo may be in danger too.​

Truth #5: In targeting Gawker, Thiel is putting innocent people out of work

Spiers, the co-founder and one-time editor of Gawker, raised the human toll in a Medium blog post:

“Even the most egregious things Gawker has written haven’t put literally everyone who works for Thiel out of a job,” she notes as the site she founded reportedly may go up for sale.

Spiers even compares Thiel to a bomb, saying, “you start to worry about being anywhere near the blast radius when the person blows up, for of being completely incinerated – maybe even unintentionally.”

Truth #6: This goes beyond Silicon Valley

Chava Gourarie of the Columbia Journalism Review points out that Thiel’s reach extends beyond Silicon Valley. He co-founded Palantir, a data-analytics compay (read: personal information storehouse) that has contracts with the NSA, FBI and CIA. She ponders how Thiel (and his millions) may, down the line, influence media coverage of these agencies and their activity:

“Contracting with the intelligence and defense communities is not in itself damning. But Palantir and others in the field are legitimate targets of media inquiry given the surveillance-happy climate in the federal government. One more reminder that an unchecked tech industry, covered only by a cheerleading tech press, is dangerous.”

Writes Klein on Vox: “The result of Thielism, looking a few years down the line, is likely to be an equilibrium that’s bad for everyone: limits on third-party funding of lawsuits and a more fearful press corps that has to worry over not just the accuracy and newsworthiness of what’s being written but the resources, litigiousness and vindictiveness of whom it is writing about.”

If successful, Peter Thiel’s victims will not only be the Gawker site and staff, but also anyone who supports the freedom of speech and the power of the press to hold figures like him accountable.