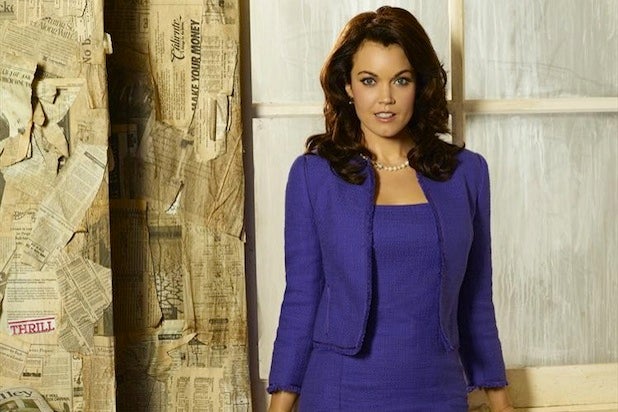 While most actresses are lucky to perform one great life-changing scene in a season, Young has acted through a husband’s betrayal with another woman, professional suicide, a rape by a family member and the list goes on and on.

Young has certainly deserved a spot in the Emmy race for Outstanding Supporting Actress and a win in that category at the Critics Choice TV Awards on Thursday is certainly a good sign that she’ll snag a nomination.

In TheWrap’s Emmy contender series, Young looks back on her character’s intense year on “Scandal,” reveals who would be at the top of her Emmy ballot and the roles she would love to step into.

1) What was the toughest thing you had to do this season?
Wow, well, the toughest thing I had to do this season was be raped by my father-in-law (Big Jerry, played by Barry Bostwick). You know we only get our scripts the day before we start shooting, so it was a shock, though so much of my character’s life choices in the present fell into place for me as I came to know her history – and I was and remain proud to be part of a storyline that brings to the light something that I think happens far more often than we’d like to believe. But it was tough prepping for it, because I wanted to stay open to tell that story with love and courage, not judgment. There were also physical constraints on the room, so we had to shoot it rather repetitively, which was tough. But we had shot all of the rest of the flashback narrative that day since we only had the location for one day. And though that was hard, that helped. Plus, I had fasted all day so I’d be really empty and open by nightfall. Bottom line, I’m the luckiest because Barry is wonderful and we did our best to take care of each other through it all.

2) What was the most fun thing you had to do this season?
Oh, Jon Tenney and I had a ridiculous amount of fun learning to shoot skeet. We were like kids on a high school field trip. And the scene that we eventually folded our new talents into was such a delicious little mental striptease… It sounds crazy for a single, peace-loving vegan to say, but shooting and flirting was a ball.

3) Let’s assume that somebody has never seen your show. What would you say to persuade them to watch it?
I sort of think “Scandal” is experiential: the sheer pace of the show, the way we burn through plot, the moral ambiguity of the characters — I’m not sure how I’d put it into words. More likely, I’d cue up an episode on my iPad, hand it to them, and just press play. I’d probably lose my iPad for a couple of weeks, but I think I’d gain a Gladiator.

4) Imagine you’re an Emmy voter and you can’t vote for yourself or your show. Who’s at the top of your ballot?
I can’t vote for anyone from my show? Hmmm. Well, I can tell you that [“Orphan Black’s”] Tatiana Maslany lays me flat every episode. Flat! And [“The Killing’s”] Peter Sarsgaard did some gorgeous work this year, as did [“Ray Donovan’s”] Jon Voight and Jeffrey Wright. I am always, without fail transported by “Mad Men”; I can’t believe that series is almost over. I’ll be lost. And I think Lena Dunham continues to create something real, indelible, thought-provoking, and hilarious every week with “Girls.” There has been absolutely beautiful work all around this year!

5) If you could play any other role on any other show, what would it be?
Gosh, it’s hard not to wish to be Joan on “Mad Men” for a minute, but then no one could ever be Joan but Christina [Hendricks]! I guess the dream would be to live an arc as riveting as Bryan Cranston’s Walter White [on “Breaking Bad”]. Yeah, I’d love to get to be a female Walter White for a few years — hard stuff, but so fun to wrestle with.

6) What was the last TV show you binge-watched? How many episodes did you see in a sitting?
I’m not a binger! I know that sounds antiquated, but I’m still a fan of delayed gratification. I soak up the stories one at a time. And the more I love something, the more I save it. And savor it. I’m the same way with books: If I reeeeaaallly love a book, I’ll never read the last page because I never want it to be over.

7) If you get nominated, what will you pick as your Emmy episode?
Shonda [Rhimes] and our writers gave me a couple of incredible flashback episodes this year, which I’m profoundly grateful for and super proud of. But, I think I’d pick “Everything’s Coming Up Mellie.” My only lament is that there isn’t any Drunk Mellie in it, because I’m proud of that too. Honestly, it would just be a dream come true to be in a position where I had to make that decision.

8) Is this the Golden Age of Television?
It sure feels like it, doesn’t it? When you can sit down on your sofa, in the comfort of your home, at your leisure and at your own pace, dive into so many intricate, thrilling, gasp-inducing shockers of stories. To live with characters who continually surprise you, their moral ambiguity being far more compelling and real than any older model of protagonist/antagonist storytelling. And, whatever you look like, whomever you love, or whatever you believe, to finally be able to see yourself mirrored on television, to have your story told. I know I’m excited and proud to be a part of this moment in television, and I can’t wait to see all that is to come!