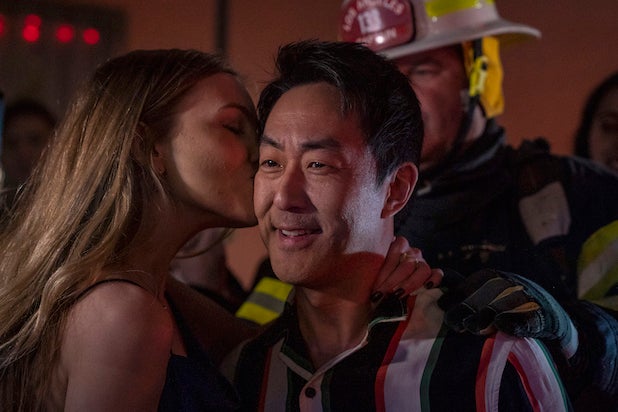 Welp, we still don’t know if Chimney will live or die — but we do know way more about Chimney.

Tonight’s episode of “9-1-1” jumped between scenes of Kenneth Choi’s character (possibly?) bleeding to death outside Maddie’s (Jennifer Love Hewitt) apartment in the present day and an origin story that revealed how Chimney — err, Howard came to Station 118 many years ago.

TheWrap spoke with Choi about the beginnings of Chimney on Monday’s episode, aptly titled “Chimney Begins.” But before we go back to 2005, we tried to get the Fox first-responder drama’s star to tell us what’s going to happen to our boy in the future.

“All I can say is that last we saw him, he was in that corridor bleeding out, so I really can’t tease much,” Choi told us. “I hope that he makes it — but I’m not sure if he’s going to make it. I mean, he did take three stabs to the stomach, right?” he said, laughing.

Also Read: '9-1-1' Chief on Why That Gutting Maddie-Chimney-Doug Cliffhanger Won't Be Resolved Right Away

Yes, he did. And we’ve been trying to forget about it ever since the Season 2 midseason premiere closed with Maddie’s abusive ex sticking a knife in Chimney’s gut and then leaving him for dead before busting into Maddie’s apartment and knocking her out. Oh, and all of this went down just as Chimney was coming to pick up Maddie for their long-awaited first date.

We know what you’re thinking: Why do things like this keep happening to Chimney — the man who took a piece of rebar to the head in Season 1 and was abandoned by his girlfriend during his recovery?!

“I ask that every time — every single time,” Choi told us. “I guess the writers like to inflict a lot of pain on Chimney (laughs). As an actor it’s great because without conflict, you have no drama. And Tim Minear — our rugged showrunner — he believes in lots of conflict. I also believe, personally, whatever hardships you go through and preserver through, you become a stronger person. So I would say Chimney is one of strongest characters on the show because he goes through so many hardships and comes out of it OK — but we’ll see what happens with this one.”

Also Read: '9-1-1' Showrunner Tells Us if That Proposal Will Survive Past the Holidays

OK, back to the past now, where Chimney — we mean Howard — endured a lot of pain too.

Episode 212 explored how Choi’s character went from being an “entrepreneur” (he almost invented the Snuggie! kinda!) to a firefighter: One night, he saves a woman who caught fire in a karaoke bar where he and his best friend Kevin (played by James Chen) work and the two decide to sign up so they can both make a difference.

Spoiler alert: Kevin later dies right in front of Chimney on a call. We know, we know — but he muddles through in the end.

“Chimney is all about joy,” Choi told us. “He overcomes a lot of hardships with love and joy. Chimney is kind of the heart of the 118 crew.

Ultimately, the hour teaches us why Chimney became a paramedic: learning from Eli (Mac Brandt), a medic at the 118, that the firefighter’s rescues mean nothing if there aren’t good paramedics to take over.

“In the first season, you saw a little bit of Chimney’s bravado coming out. There were some moments where he wanted to do more than having to go get the winch,” Choi said, laughing. “He wanted to be more proactive, so that’s some of his base needs and wants of why he decided to even become a firefighter.”

He continued: “But that scene in the ambulance is so beautiful, because it does explain that’s a huge risk to hand them off. After firefighters save a person from a burning building or whatever situation, they have to hand them off — and if that patient dies on the way to the hospital, they didn’t get to do their job. The paramedics have to get them to the hospital alive. And it informs so much of who Chimney is in the present day, because that’s exactly why he wanted to become a firefighter — because he wanted to help and contribute in whatever way he can and that speech resonated with him.”

And now back to that present day, where the episode ends with a shot of Chimney, still unconscious in Maddie’s hallway.

“I am a huge Maddie and Chimney fan,” Choi said, still giving us nothing about Chimney’s fate. “I think they have gone through some treacherous events and tumultuous, past personal relationships. And they both need some hope and some love in their lives. And I think they are perfectly suited for each other. As far as will they actually make it? I guess we’ll see. I know the writers like to do slow-burn relationships and they like to throw conflict in the relationships to fuel drama and this is a pretty big conflict, being stabbed by her ex husband. So I guess we’ll have to wait and find out if they actually find happiness or not.”