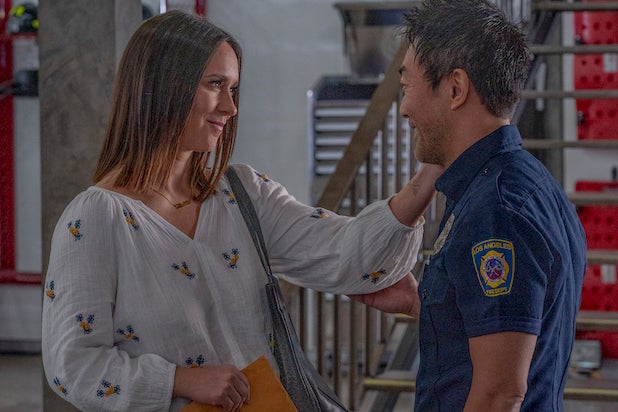 Just when it seemed he and Maddie (Jennifer Love Hewitt) were going to finally make things official with their first real date, her estranged, abusive husband, Doug (Brian Hallisay) — who has been secretly trying to locate her and buddying up to Chimney by hiding his true identity — attacked Chimney in front of her apartment and left him for dead. Right after Maddie had finally summoned up the courage to send Doug the divorce papers, too!

And while we know you are probably dying to make sure that he’s OK — and not, you know, dying — “9-1-1” showrunner Tim Minear tells TheWrap there will be a pause before you find out Chimney’s fate and what happens to Maddie after Doug busts through her door and knocks her out.

“We want you to be worried for a little bit,” the Fox first-responder drama’s chief said.

“As we go out on [Episode 211], Chimney is not OK. (laughs),” Minear said. “And then in the next episode we’re going to be doing a Chimney origin story and it does not forget where we are in the timeline, but we’re going to learn more about Chimney and then we’ll come back and resolve his storyline in the present. And Chimney does everything in this origin story and we learn so much. It’s amazing.”

OK, so we can’t promise you Chimney lives, but the guy had a piece of rebar jammed into his head and survived — so we’re hoping he can make it through a knife to the stomach too.

Meanwhile, Minear told us what else to expected in the backhalf of Season 2, including a “heist” episode called, “Ocean’s 9-1-1” and one installment where they are sent back to the Stone Age — technologically speaking.

Also Read: '9-1-1' Showrunner Tells Us if That Proposal Will Survive Past the Holidays

“Episode 214 is called ‘Broken’ where things just start to break, literally, not just Southern California infrastructure but the call center breaks down,” Minear said. “And so we get to see what happens in a situation where they have to go analog and they have to go back to the white boards, and the clipboards, and the 3 x 5 cards, and the Thomas Guides, and the handset radios. Like what do you do when that incredibly complex computer dispatch system goes down? It causes chaos out on the streets and we get to see that chaos in the call center and outside in the world.”

And then yet another origin story, but this one gets to the heart of Peter Krause’s Bobby.

“And then we’ll be doing a hybrid of one of our origin stories and a regular episode, it’s called ‘Bobby Begins Again’ and we get to explore what happens when he first came to the 118,” Minear said. “And then the next two episodes build to a big finale I don’t want to give away yet.”

Fine, as long as Chimney is OK.