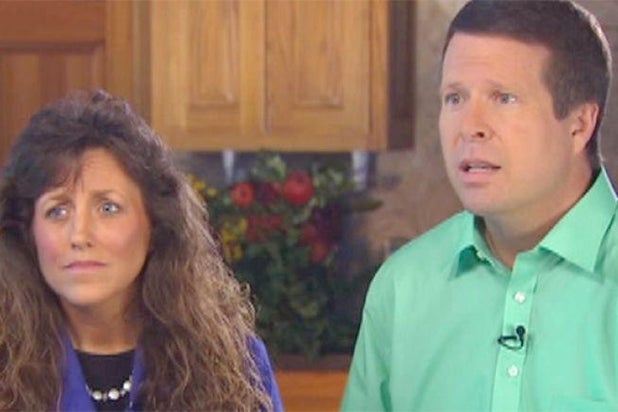 Megyn Kelly’s Fox News Channel interview with Jim Bob and Michelle Duggar revealed quite a bit about the parenting techniques of the “19 Kids and Counting” matriarch and patriarch — but plenty of questions remain.

Will “19 Kids and Counting” Finally Be Canceled?
TLC has yet to can “19 Kids and Counting,” though the Discovery Communications cable channel yanked it from its schedule fairly swiftly. As a result, the popular show was also taken down from platforms such as Hulu. At the moment, it appears that no official decision has been made about the series’ future — perhaps TLC brass were waiting for the interview’s public reaction, which is already well underway.

As Kelly herself told TheWrap on the of her big interview: “I don’t know what TLC will decide, because it’s a big moneymaker for them and it’s only getting more popular … This case is more complicated than at first it appears.”

Will TLC Change Its Programming and Vetting Practices as a Result of the Scandal?
The cable channel pays its bills with reality television, and some of it isn’t the classiest programming — remember “Here Comes Honey Boo Boo”? Having canceled that show following its own molestation fallout and with “19 Kids and Counting” on the bubble at best, is it time to shift gears overall, ratings be damned? Or is the vetting process more to blame?

One prominent reality TV executive previously told TheWrap that the vetting process on cable networks is far laxer than that of broadcast TV.

“The big networks, say, ABC with a show like ‘Wife Swap,’ do an intense screener: full physical and mental health histories and a drug test. People often fail,” the insider said. “When you get to cable, you find it’s not as professional.”

Will the Family Still Stay as Politically Active After the Scandal?
The Duggars have been prominent members of the GOP, with father Jim Bob previously having served in the Arkansas House of Representatives and Josh Duggar on the board of the conservative Family Research Council.

Josh has since resigned that position, and former Republican allies have begun turning on the family. Rick Santorum, whom the Duggars endorsed for President in 2012, said, “I was just sickened by it. I pray for those girls in particular … To have gone through that is … just hard to think about.”

With the future of the show uncertain and the family’s public image severely tarnished, CNN conservative contributor Ben Ferguson said it would be wise for the GOP to distance itself from the family.

“At this point, anyone who stands [with] them I think would be irresponsible; it sends the wrong message,” Ferguson asserted on CNN.

Will More Revelations/Accusations Arise?
All reports indicate that Josh Duggar molested five girls, including his own sisters and a babysitter. However, in cases such as this, it’s not uncommon for more alleged victims to come forward, much as they have in the scandal that has rocked comedian Bill Cosby.

What started as one victim in Cosby’s case quickly snowballed to now include over three dozen women accusing the comedian of drugging and sexually assaulting them.

If Josh Duggar did in fact engage in inappropriate behavior beyond what’s already been reported, it would only further impair his and the family’s already immensely damaged image.

Could There Be a Civil Suit or Charges From Other Incidents That Would Still Fall Under a Statute of Limitations?
Much like the scandal, the statute of limitations on Josh Duggar’s abuse has expired. However, should additional victims come forward, like the babysitter mentioned in Wednesday’s interview, there’s the chance that a civil suit could be forthcoming.

Likewise, if it’s revealed that Josh Duggar committed additional counts of abuse since those already reported, he could face charges depending on when they occurred.

Could Children Be Taken Away From the Duggars?
Arkansas’ Department of Human Services had no comment, but the agency can only open an investigation if a victim calls its child abuse hotline. At present, the case is considered closed, but a new complaint could yield a new investigation, which would be opened by the agency, with any affirmative findings handed over to state and local law enforcement, which also had no comment.

Will the Interview Score “The Kelly File’s” Biggest Ratings to Date?
Fox News’ “The Kelly File” has been crushing its 9 p.m. competition in the ratings essentially since launching. The 44-year-old Kelly has enjoyed 20 straight months atop both the key 25-54 cable news demographic and total viewers.

In May, Kelly’s FNC hour averaged 2.122 million total viewers, with 417,000 coming from the key demo. “The Kelly File” was second in both metrics across all of cable news, following only fellow Fox News anchor Bill O’ Reilly’s “The O’Reilly Factor.” As a matter of fact, Kelly saw a whopping 58 percent year-over-year viewership increase in the main news demo, the biggest growth for first-place FNC.

Whether or not the Duggar interview scores Kelly her biggest ratings will be known later today.

Has Megyn Kelly Set Herself Up to Get the Next Big Pop Culture Interview Too?
Though just those aforementioned 20 months into the primetime game, the Duggars follow a string of big interview “gets” for Kelly, including politicians Jeb Bush, Mike Huckabee, Dick Cheney and Chris Christie.

“We are very much in contention for the biggest ‘gets’ right now,” Kelly told TheWrap earlier this week. “It’s a jump ball, but I think that ball is tipping over to me.”

However, social media reaction to Kelly’s performance was mixed with many accusing the Fox News anchor of conducting a “softball” interview.

Will the Babysitter Victim Come Forward?
Jessa Duggar revealed that she was abused by her older brother, but Jim Bob and Michelle also revealed that Josh inappropriately touched a babysitter when he was a teenager. While the babysitter’s name has been withheld, she may now come forward to avoid having her name released in the media.

Then again, she may wish to avoid the scandal all together and do her best to remain anonymous. In the Internet age, however, that seems unlikely.