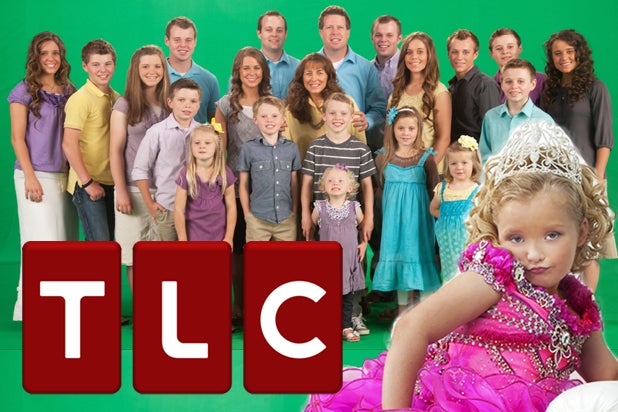 Is the network just unlucky, or did its executives (and show producers) fall down on the job?

A prominent reality executive speaking on the condition of anonymity told TheWrap both “Here Comes Honey Boo Boo” and the Duggar show, which launched in 2006, may have bypassed the network’s usual vetting process.

The Duggar series, which consistently drew a weekly audience of 3 million, began as a one-off special on TLC’s sister network Discovery Health. “When TLC absorbed the show, they had a family that had only been screened for an hour-long documentary and took them to series,” the insider said. “It would’ve been much different had they ordered numerous episodes at the start.”

But as far back as December 7, 2006, some saw signs that the Arkansas-based Duggars may not fully live up their public image of evangelical-Christian propriety. According to TMZ, the first tip about child molestation by eldest son Josh Duggar was sent to a staffer at Oprah Winfrey‘s Harpo at 6:30 a.m. that day.

The email not only referred to the molestation charges, which Josh Duggar has since acknowledged, but the author also claimed that parents Jim Bob and Michelle covered up the charges. Oprah’s team sent the email to a child abuse hotline, and canceled the family’s scheduled appearance on Winfrey’s show the following day.

“The question is: How come Oprah knew about it and TLC didn’t?” noted Howard Bragman, chairman and founder of Fifteen Minutes Public Relations. “There was a lot of chatter online when Oprah canceled their appearance. What did TLC know and when did they know it? And if they didn’t know about it, why didn’t they? Oprah’s cancellation should have been a huge red flag.”

According to the reality exec, the vetting process on cable networks is far laxer than broadcast TV’s.

“The big networks, say, ABC with a show like ‘Wife Swap,’ do an intense screener: full physical and mental health histories and a drug test. People often fail,” the reality-show insider told TheWrap. “When you get to cable, you find it’s not as professional.”

On the Oxygen series “Bad Girls Club,” the source recalled, “finalists for the cast will sit with the network’s head of business affairs, two lawyers and a witness, and they’ll go through a list of house rules.” After parameters are set, the cast will sign waivers releasing the network from liability for any physical or emotional harm to the group.

“One ‘Bad Girls’ finalist actually asked in her screening, ‘What happens if I stab someone?'” the insider said. “It’s ‘The Hunger Games.'”

Physical confrontations aren’t the only danger on a reality set. For MTV’s 2014 show “Are You The One?” 20 contestants were brought together for potential romantic pairings, with a cash prize offered for 10 perfect matches. A medical screening missed one contestant’s STD, the executive said, almost causing a major outbreak in the rest of the cast.

“They caught it in time, but that was almost a huge disaster,” the insider said.

Another important note, the insider said, is the revolving-door culture in cable. “there’s so much turnover on every level, things fall through the cracks.”

Still, some argue that TLC should not be blamed for faulty pre-screening. “You can only vet so much,” said crisis manager Ross Johnson, who helped Wesley Snipes during his tax litigation issues and says TLC execs should not be faulted here. “They’re not FBI investigators. A certain percent of families on TV will unravel.”

That’s particularly true of the more tabloid-oriented reality TV stars of the last decade, an area that is relatively new to a network that was founded in 1972 as a joint project of NASA and the Department of Health, Education and Welfare.

By 2001, a decade after Discovery acquired the network, TLC had veered away from education programming for more mainstream reality fare.

And critics note that there’s an inherent risk in focusing on more downmarket reality stars like Mama June and the Duggars. “TLC is an organization that’s turning their brand into a freak show,” Johnson said of all in. So unless they’re willing to cancel that and fire everyone, they’re going to try and ride this out.”

Despite the double-punch of “Honey Boo Boo” and the Duggars, don’t expect any executive or high-profile TLC employee to face the firing squad. For now, though, TLC chief Marjorie Kaplan and Discovery Communications CEO David Zaslav seem safe in their jobs. “There’s been no indication here that any individual will be held responsible,” a person with knowledge of the situation told TheWrap. “In an industry that deals with real people, unfortunately unexpected things can happen.”

Market analyst Michael Nathanson of MoffettNathanson agreed: “[I] don’t see anyone losing their jobs over this,” he said.

While at least four national advertisers have pulled out of the show in the last week, the long-term impact could be minimal for Discovery’s bottom line. “19 Kids and Counting” represented 11 percent of TLC’s GRPS (Gross Ratings Points) in 2014, according to Nathanson. While TLC “might be” 20 percent of Discovery’s total U.S. revenue, he added, even if TLC lost half of “19 Kids” ratings, the dent in total company revenues would be about 0.5 percent.