Few shows have the depth of pop culture knowledge — and ruthless willingness to parody it — that “The Venture Bros.” does. This is especially true for comic books generally, and in particular the Marvel Comics universe.

The Ventures wind up in New York in Season 6, and there they find the superhero game is a little higher-class than they’re used to. On their first day, they encounter the Crusaders Action League — a group of characters that’s essentially the Avengers with a splash of Justice League. It consists of Stars & Garters, a Captain America analogue with a costume made of an American flag and literal garters; Warrina, an Amazon warrior who looks like Wonder Woman + Thor (or if you prefer, + Valkyrie); Night Dick, a dark detective with a motorcycle not unlike a Batman-ish Ghost Rider; and Fallen Archer, a Hawkeye-slash-Arrow hero who shoots arrows with feet instead of arrowheads.

The best part of the “Venture” Avengers joke is that the superhero team doesn’t work for free. Instead, they run a glorified protection racket for local supervillain and crime boss Wide Whale (basically The Kingpin, but a shark). Quite the opposite of Tony Stark’s generous, taxpayer burden-free Avengers Initiative. 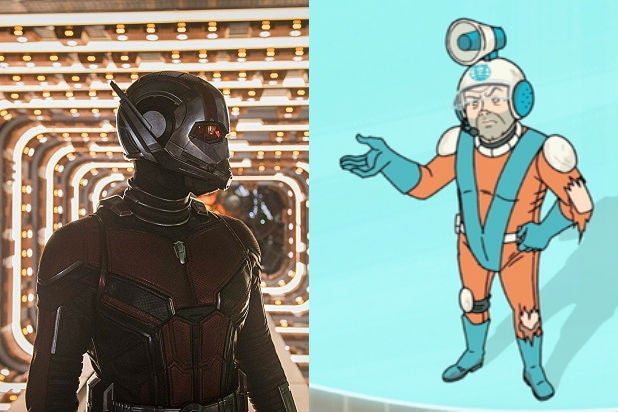 There were a bunch of members of the original Team Venture who had analogues with secret agents, adventurers and heroes. Col. Gentleman, for instance, is a riff on Sean Connery’s James Bond, but a great deal more lewd. The half-fish Otto Aquarius is an Aquaman joke — he’s even known as the Lost Son of Atlantis. And then there’s Paul Entmann, whose name gives away the joke when you say it out loud.

Entmann (Stephen DeStefano) got his big explanation in Season 3, when Brock (Patrick Warburton) discovered an ant-sized man in a fallout shelter beneath the Venture compound. Entmann had been trapped there for 30 years by Dr. Jonas Venture Sr.’s evil M.U.T.H.E.R. mainframe computer. The best part of the Ant-Man gag is that Entmann wears what is effectively a bullhorn on his head, so regular-sized people can hear him. He doesn’t control ants like Ant-Man does, and in fact, he suggests he spent 30 years fighting off their sexual advances while stuck in the shelter.

The joke is compounded by the fact that Entmann was originally called Humungoloid — because he was gigantic. He only wound up ant-sized when Jonas tried to save him (the square-cube law was killing him). He died in Season 5, when an elderly Action Man accidentally squashed Entmann with his rocking chair.

Dean as Peter Parker (plus the Brown Widow) 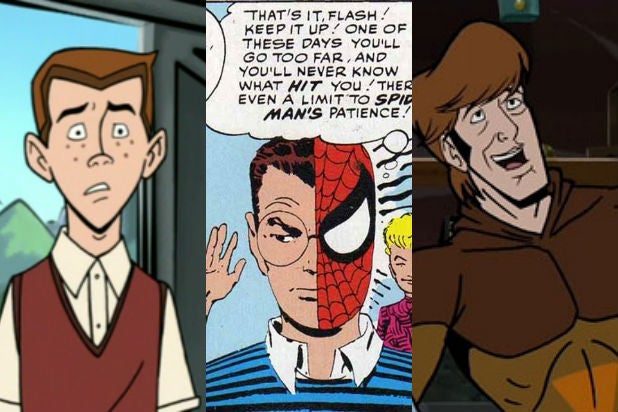 When viewers are first introduced to Dean Venture (Michael Sinterniklaas), he’s dressed a lot like Peter Parker from his early run in the Marvel Comics. And in case it wasn’t clear, Dean wears Spider-Man pajamas.

The Spider-Man joke gets much more on-the-nose when Dean takes an internship at Impossible Industries in New York City in Season 4. He encounters a Spider-Man analogue called the Brown Widow (Nathan Fillion), a showtune-singing superhero in a brown Spider-Man-like suit. Like a lot of superheroes and villains in “The Venture Bros.,” the Widow’s powers are a more literal version of those of the character he’s parodying — he shoots web from a gland in his lower back, like a real spider does.

As an added bonus, in his civilian identity, Brown Widow looks a lot like Nicholas Hammond, the actor who played Peter Parker in the 1977-79 “The Amazing Spider-Man”live-action TV show. 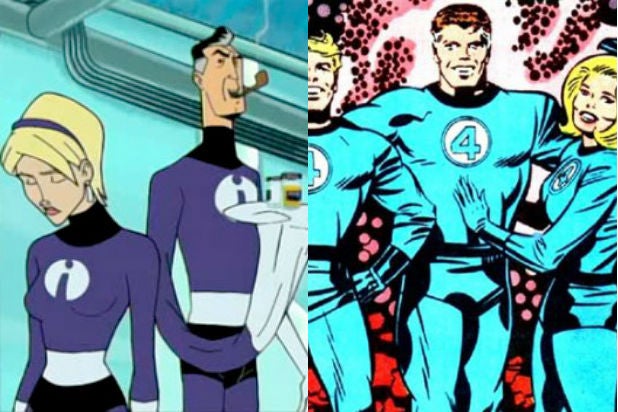 Season 1 sees Rusty (James Urbaniak) joining a think tank run by Professor Richard Impossible (then voiced by Stephen Colbert), a former college professor who owns Impossible Industries. Impossible and his family are a dysfunctional parody of Marvel’s Fantastic Four, and largely take the ideas of those characters and their powers to some logical conclusions.

Richard (Mr. Fantastic) is an overbearing jerk, who keeps the other three Fantastic parody characters under wraps. His wife, Sally Impossible (Invisible Girl) can turn invisible — but only her skin, revealing her muscles in horrific fashion. Her brother Cody Impossible (Human Torch) bursts into flames whenever his skin touches oxygen, causing him horrific pain, so Richard keeps him in an airless chamber, but also uses him to power his building. Ned, the “Venture” version of Thing, has extremely hard skin because he’s essentially one giant callus. He’s also mentally disabled, a joke that feels extremely mean-spirited and out-of-touch today.

The Galactic Inquisitor — The Living Tribunal as Basically an Annoying Nerd 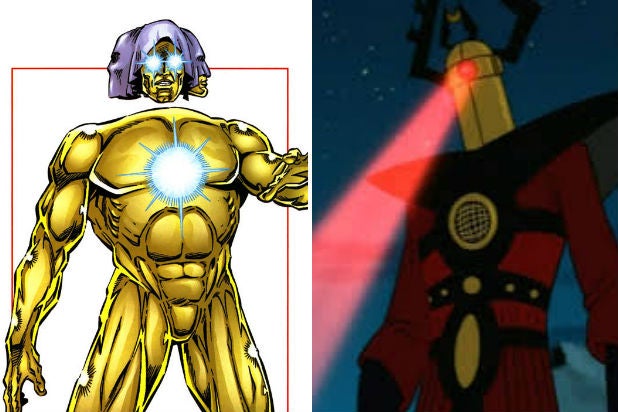 In the Season 2 episode “Twenty Years to Midnight,” Team Venture encounters a being calling itself The Galactic Inquisitor, a weird robotic thing with three rotating eyes who comes to Earth from a distant solar system to pass judgement using criteria he never actually explains. He declares that Rusty will serve as his sample subject on behalf of the entire human race. He spends the episode following the Ventures around, frequently annoying them by loudly insisting “Ignore me!” (because he’s supposed to be an impartial observer).

He’s a parody of Marvel Comics’ The Living Tribunal, a cosmic being who oversees the balance of reality throughout the entire Marvel multiverse. Tribunal primarily shows up to restore, or enforce what it considers to be the correct status quo. In its first appearance (Strange Tales #157-163, 1967), the Living Tribunal announced it would destroy Earth, due to what it saw as a dangerous capacity for evil, but it gave Doctor Strange a series of tests to prove that Earth deserved to be saved. Strange prevailed and Earth was spared, but the Tribunal continues to have a major impact on the Marvel universe in later appearance.

(He’s also arguably a reference to Uatu The Watcher.)

On “The Venture Bros.,” Rusty doesn’t have to convince the Inquisitor of Earth’s worth because the Inquisitor never actually tells him what’s at stake. But at the end of the episode, just as The Inquisitor announces he’s ready to pass judgement, another alien shows up and kills him — then tells Team Venture he just saved theirs, and everyone else’s lives. Apparently all the Inquisitor does is destroy entire civilizations for no reason.

In “The Venture Bros.” universe, superheroes and villains are closely monitored by a government agency called the Office of Secret Intelligence, the good guy counterpart to the Guild of Calamitous Intent. Basically the military-industrial complex of superpowers people, OSI keeps costumed beefs from becoming too disruptive to normal society, and protects high-value good guys. For instance, Venture bodyguard Brock Samson was assigned to protect Rusty Venture by OSI.

OSI also conducts military operations of its own, usually against greater-scope threats who don’t submit to OSI-Guild regulations. In flashbacks we learn that back in the 1980s OSI fought a global war against an evil organization called SPHINX, an Ancient Egypt-themed terrorist group determined to take over the world. Basically it’s G.I. Joe vs. Cobra, but also kind of a riff on Marvel Comic’s “S.H.I.E.L.D.” family of titles.

*Pedantic voice* When the G.I. Joe toy line was revived in the early 1980s, Hasbro approached Marvel about a tie-in comic series that would also connect to a TV show. No one at Marvel wanted the job writing a glorified toy commercial except writer Larry Hama, who had recently pitched an idea Marvel editor Jim Shooter turned down: a comic called “Fury Force,” about the son of Nick Fury leading a S.H.I.E.L.D. special forces team in a battle against a new iteration of HYDRA. Hama cleverly repurposed most of his “Fury Force” ideas and characters for G.I Joe, added details and perspective from his Asian-American upbringing and real-life Vietnam war military service, and basically invented the lore for one of the decade’s best-selling toy lines by himself. (He also wrote the comic for its entire run. Definitely check it out because it was great.)

OSI and Sphinx are wild parodies of Hama’s ideas. And in one flashback we even see OSI had its own theme song — just like G.I. Joe.

General Treister — Basically if Nick Fury, Thunderbolt Ross and the Incredible Hulk were one person 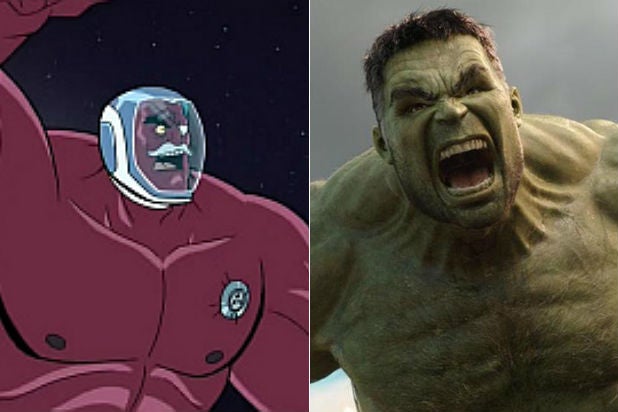 The Modern day leader of the OSI, until recently, was General Treister (Toby Huss), a ridiculous amalgamation of a bunch of Marvel characters. Commanding the OSI from its floating hover-carrier (just like S.H.I.E.L.D.), he sports an eye patch like Nick Fury, the gruff demeanor and gray hair of the Incredible Hulk’s enemy Gen. Thunderbolt Ross (who’s currently Secretary of State in the Marvel Cinematic Universe, played by William Hurt), and an atomic pacemaker sort of like Iron Man. Oh, and he thinks he’s a hulk, thanks to radiation to treat his prostate cancer.

It’s a running joke for a bit that Treister does not actually hulk out, but that his OSI underlings humor him so he feels a little less bad about passing out from his cancer treatment. At the end of Season 5, though, Treister turns the OSI over to Hunter Gathers (a Hunter S. Thompson OSI super-spy who mentored Brock) and launches himself into space with the hopes aliens will find him and fix his condition. He’s found later, and really does turn into a Hulk — a red one, just like Ross does in the Marvel comics. 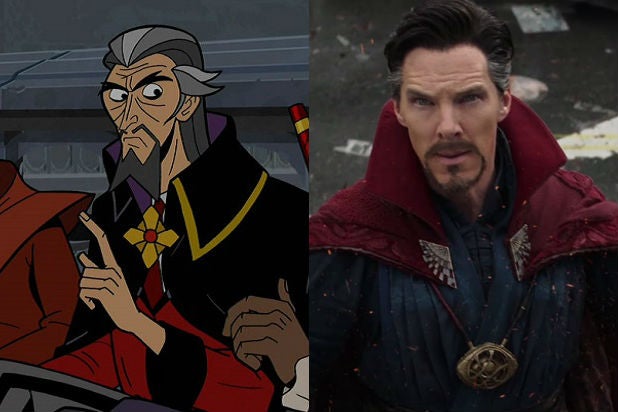 Dr. Orpheus (Steven Rattazzi) rents part of the Venture compound, where for years he lived with his daughter Triana. He calls himself a necromancer — basically, an all-purpose magic guy — and constantly and dramatically tells Rusty Venture that his job is to protect the fabric of reality (something the real Doctor Strange also harps on). He soon comes to wish he had a supervillain of his own after seeing nemeses “arching” Rusty, and got one, finally, when he banded together with two other mystical friends, The Alchemist and Jefferson Twilight, to create the Order of the Triad. Jefferson, by the way, is himself a riff on the Marvel vampire hunter Blade, though he only hunts “Blaculas.” 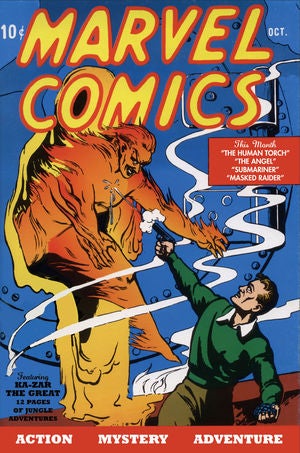 One whole episode is dedicated to a long gag about the first issue of Marvel Comics. It’s the start of Season 4, which shows two concurrent storylines that take place at different times: What happened to Brock after he was nearly killed at the end of Season 3, and where the Venture clan is in the present, with a new bodyguard in Sgt. Hatred (Publick). It’s tough to pick up at first, but a comic is passed around repeatedly in the episode with various awful things happening to it, including Hatred using it as emergency toilet paper.

It’s only at the end of the episode that it’s revealed that Henchman 21 (Hammer) tried to use the comic to pay Rusty to clone his dead friend, Henchman 24 (Publick). Rusty didn’t know what he had, and handed the comic off to Hank and Dean, who promptly destroyed it. The best part of the gag is a value tracker at the top of the screen, whose purpose isn’t clear until the moment Hank removes the comic from its plastic protector — and the issue’s half-million-dollar value plummets.

What’s more, the finale episode of Season 3 was also full of Marvel No. 1 references, using the characters teased on the issue’s cover as chapter titles as Brock fights off a slew of assassins trying to take him out once and for all.