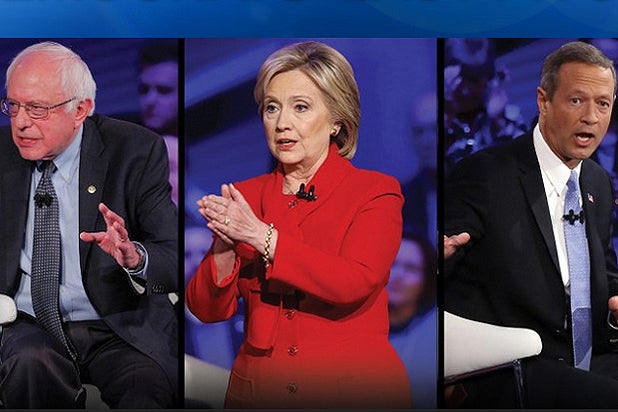 In their last group appearance in front of Iowa voters before the state’s caucuses, the Democratic presidential candidates addressed some surprisingly touchy issues.

Hillary Clinton confronted questions about her perceived lack of honesty, Bernie Sanders said he wasn’t too old and Martin O’Malley quickly chose which issue should be most important to young voters.

If you tuned out because you didn’t think CNN’s town hall format would be as interesting as a debate, here are nine things you missed:

1. Sanders is asked to explain what “democratic socialist” means
Bernie Sanders’ first question came from an undecided voter who asked what he thought of the “socialist” label.

“What democratic socialism means to me is that economic rights, the right for economic security, should exist in the United States of America,” Sanders said. “There’s something wrong when the rich get richer and almost everybody else gets poorer.”

Citing other places like Scandinavian countries and Germany, Sanders pointed out that “the ideas that I am talking about are not radical ideas,” insisting that Socialism means a government for everyone, not a “government dominated by the billionaire class.”

2. Sanders makes an impassioned case for why he would be better for women than Clinton
A female voter leaning toward Clinton asked Sanders one of the best questions of the night: How would he be a better candidate for women’s issues than Clinton?

Sanders stood up, to the surprise of moderator Chris Cuomo. When Cuomo told him not to leave just yet, Sanders had one of the best lines of the night: “This calls for a standing-up response.”

“If you look at my record in terms of fighting for women’s rights, I think there are very few members of Congress who have a stronger record,” Sanders said. “We’re gonna fight for pay equity to make sure that everybody earns the same amount for the same work.” Sanders also called for raising the national minimum wage, which would disproportionately help women.

Moderator Chris Cuomo tried to interject but Sanders dismissed him, waving his hand. “I’m trying to win her vote — leave me alone, here!”

3. Sanders is 74. Not 75.
When Cuomo mentioned that Sanders would be the oldest person elected president, Sanders managed to deflect the issue with a little bit of humor, correcting Cuomo by noting that he’s not 75, but 74: “I’m going on 75, so are you!” He said in mock outrage.

Sanders promised to release his medical records before the Iowa caucuses, saying that there’s nothing that would surprise anyone.

4. O’Malley gets an A+ for his first answer
O’Malley was asked what issue should be most important to young voters and why.

Without a moment’s thought, O’Malley’s answered, “That is climate change.”

His response got thunderous applause from the crowd.

“Climate change is the greatest business opportunity to come to the United States in 100 years,” he said. He then cozied up to the Iowa crowd, telling them: “This is another one of those instances where Iowa is pointing the way forward — 30 to 35 percent of your energy now comes from clean, Iowa wind.”

The 53-year-old O’Malley, who’s running against two of the oldest candidates in the presidential race, went for the youth vote, taking off his jacket and rolling up his sleeves as he walked around the stage. The message was clear: He’s ready to get his hands dirty and get to work.

6. O’Malley gets snaps for a Trump one-liner
This was not exactly an answer to a question, but still. O’Malley delivered one of the best lines of the night, telling the audience, “The enduring symbol of this country is not the barbed-wire fence. It is the Statute of Liberty.”

7. Clinton embraces President Obama
Clinton told Cuomo that she was “really touched” by President Barack Obama’s comments in a recent interview, in which he called her “wicked smart.”

“We ran a really hard race against each other,” Clinton said, “and then I had the opportunity when he asked me to serve as his secretary of state. … And it turned into a real friendship. He knows how hard the job is, he knows it first-hand.”

9. Clinton calls out Trump
In one of the strongest moments of the night, Clinton slammed GOP frontrunner Donald Trump.

Clinton was asked a question from a Muslim woman who served in the Air Force about whether America is a place in which she should still raise her children.

“One of the most distressing aspects of this campaign has been the language of the Republican candidates … that insults, demeans, denigrates other people,” she said. “He started on Mexicans, he’s currently on Muslims.” She added that it was “not only shameful and offensive,” but “also dangerous.”

“We must stand against the bullying,” Clinton said.