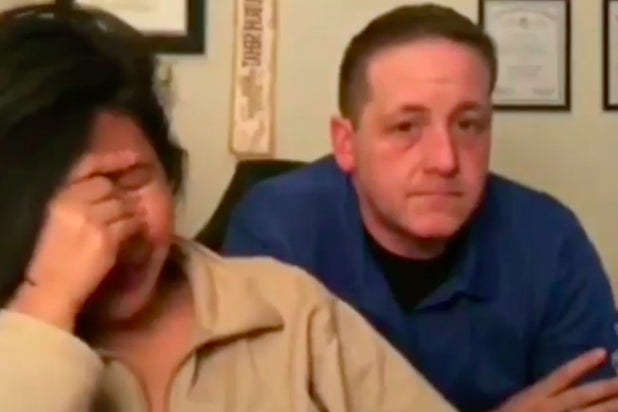 “90 Day Fiancé” couple Eric and Leida Rosenbrook say they are quitting the TLC reality dating series after receiving alleged death threats, which they claim have not been addressed by the network.

The Season 6 couple spoke of the harassment in a video posted on Instagram Wednesday by fan account @90dayfiancetea.

“I swear to God, once the contract is done, we will reveal everything that they never show it on the show,” she continued. “How can people wishing me die?” she added. “This is not fair. I’m a human, too. I never signed up for this. I didn’t know– we didn’t know that they’re going to portray us that bad.”

“And TLC’s not going to do anything about it, of course,” Eric said.

Here is the video:

Leida doesn’t know why people don’t like her and says ‘it’s not fair’. Leida claims she’s receiving alleged ‘death threats’ and TLC is doing nothing about #90dayfiance #ericandleida #tlc

Also Read: '90 Day Fiancé': Steven Wants to Take the Baby to the Park - in the Wrong Car Seat (Exclusive Video)

TheWrap reached out to TLC for comment on the video and did not immediately hear back.

Police officers were dispatched to the couple’s home in Baraboo, Wisconsin last month in response to a report of “harassment” through social media, Chief of Police Mark Schauf told TheWrap Friday.

“The officer gave them advice and counseled them on what they could do to ensure their safety,” Schauf previously told InTouch, noting the couple didn’t pursue charges at the time, but requested “police presence” at their home “because of their profile on ’90 Day Fiancé.'”

According to Newsweek, Leida also addressed the alleged death threats via a written Instagram story post earlier this week, which has since expired, writing: “I’m updating about the case only in [sic] my private account. No we won’t be on the next season. Sharp [Entertainment, ’90 Day Fiance’s’ production company] doesn’t care about the death threats. We will deal everything [sic] on our own.”

Also Read: '90 Day Fiance' Season 6: Here Are the Couples That Will Be Fighting on TLC This Season

Leida added (per Newsweek): “Death threats are not acceptable under any circumstances. If I made those death threats by myself I wouldn’t let the authorities involved. Whoever says ‘Boohoo Leida. This is on you,’ Thank you so much and I pray you will never experience the same way like I have.”

The TLC star also wrote about death threats she says have been made toward her young son, Alessandro: “My son doesn’t deserve to be killed or kidnapped. I keep it real and never lie. I value honesty and hope it will help me at court later.”

As Newsweek reports, Eric referenced the alleged threats via his own Instagram story following Sunday’s “90 Day Fiance” episode, which saw the couple come to blows over Eric paying child support for a daughter from a previous marriage and Leida demanding Eric’s adult daughter move out of his apartment.

Also Read: HGTV and TLC to Revive 'While You Were Out' as Crossover Series Between Networks

“I get why many of you hate on us so much that feel the need to contact us and spew your hate, but for the love of God, leave her son alone! He doesn’t deserve any of this from any of you!” Eric wrote.

From “My Strange Addiction” to “Honey, We’re Killing the Kids”

TLC is a prime channel to turn on during sick days or in the middle of the night when you can't sleep. Over the years, the network has produced some pretty weird shows. Here's a roundup. (There are a couple gems at the end.)