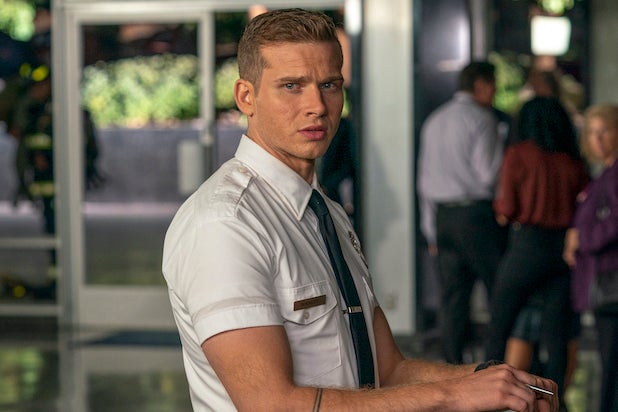 “9-1-1” took on racial profiling and police brutality in Monday’s episode, “Rage,” in which Athena’s ex-husband Michael (Rockmond Dunbar), and their children May (Corinne Massiah) and Harry (Marcanthonee Reis) had a run-in with the authorities that almost ended in Harry being shot.  This incident leads Athena (Angela Bassett) to confront the officer responsible and Michael to have a talk with their son he wished he never had to have.

“It was sort of the heart of the episode,” “9-1-1” showrunner Tim Minear told TheWrap of Michael’s harrowing encounter, which included a moment where a gun was pulled on his son by a police officer. “We knew we wanted to do an episode about rage and so we were kind of casting around and looking for stories and cases that would fit into that scene. And it felt like something we needed to do, it felt like something we wanted to do and I was confident that we could do it in a way that wasn’t exploitative and was sensitive and that put our audience into the point of view of somebody like Michael to really understand the gray areas and what that feels like.”

The episode, titled “Rage,” was written by Lyndsey Beaulieu, who Minear says worked to make sure it was “not some sensationalistic version of a thing that is hardcore, racist cops that are part of the KKK or something — but that kind of gray area that so many people have to live with.”

On a lighter note in a dark episode was the reveal that Buck (Oliver Stark) is coming back to Station 118 after dropping his lawsuit against the city, even though Bobby (Peter Krause) is still more than a little nervous about his condition.

“Buck is told he’s in fact won because the powers that be have bent to the threat of a lawsuit,” Minear said. “Also, Buck has decided not to take the giant settlement and some pencil pushers in the city government were probably glad not to write that big check. But Buck is gonna have to sign a bunch of waivers and forego any blame or responsibility that he might lay at the foot of Bobby or the fire department, if he wants to come back and play on the field, which is what he wants to do. Bobby has other ideas.”

Also Read: '9-1-1': Ronda Rousey's Lena Takes Eddie to a Fight Club - and Beats Someone Up Herself (Exclusive Video)

Oh, and if you were wondering about the possibility of Lena (Ronda Rousey) and Eddie (Ryan Guzman) hooking up after she introduced him to a Los Angeles fight club don’t hold your breath.

“She introduced him to a way to blow off some steam through this underground fight world, but I think that’s as far as it goes. We’re not setting up a love match here,” he said.