(Warning: This post contains spoilers for Monday’s episode of “9-1-1.”)

This week’s “9-1-1” picked up right where we left Maddie (Jennifer Love Hewitt) and Buck (Oliver Stark), with the siblings discussing the deep, dark secret their parents forced Maddie to keep from Buck his entire life: they had a brother named Daniel who died at age 9, when Buck was a baby. And on tonight’s hour, titled “Buck Begins,” we find out that the reason Buck’s mother and father — played by Dee Wallace and Gregory Harrison — didn’t want him to know about his late sibling is because they had Buck in the hopes he could be a bone marrow donor for Daniel, who had leukemia.

The idea of coming into this world as “spare parts” for someone else, as Buck puts it to Maddie after she reveals the truth, is more than he can handle, and he’s furious with his big sister for keeping him in the dark. It also cuts even deeper for Buck to learn he was in fact a match for Daniel, but the transplant didn’t take and his big brother died anyway.

“I think it makes so much of what we know of Buck make sense,” Stark told TheWrap. “And why, even though he doesn’t know it, he was born to save this person and he didn’t. So on a subconscious level, he still has that hero complex. He doesn’t quite understand why he has to be the one that runs into a fire to save someone — but he’s done it his whole life.”

Stark continued: “For Buck, I think it’s a really tough thing to hear, obviously, because you realize that you weren’t wanted as a person, you were wanted for spare parts. I think he has always felt that level of not being wanted, but he just didn’t know why. So to finally have that diagnosed in his life, I think, is only going to be a good thing in the long run, as much as it hurts in the beginning.”

During the episode, we see scenes of young Buck and Maddie growing up and Maddie taking extra care of her brother while his parents remain cold and distant and become easily angered when daredevil Buck puts himself in harm’s way. When those scenes are juxtaposed with the present day, we see that even though Buck feels betrayed by Maddie keeping their parents’ secret, it was not at all a burden she wanted to bear.

“In some respects, it’s almost harder on her, because she’s about 10 years old when Daniel dies, which means that when Buck is five, six, seven and she’s a mid-teenager, she knows,” Stark said. “She has a thing that she is being asked, as a child, to keep inside and not talk about. So although Buck is suffering because of his relationship with his parents and he can’t quite understand why, she does know why. And so to have her not be allowed to talk it out and process it is almost a worse thing for the parents to do to her than it is the way that they end up dealing with Buck. So I think that relationship between Buck and Maddie makes so much sense, because she knew that she really only had Buck to count on and Buck didn’t quite know why, but he obviously felt the same way in response to her.” 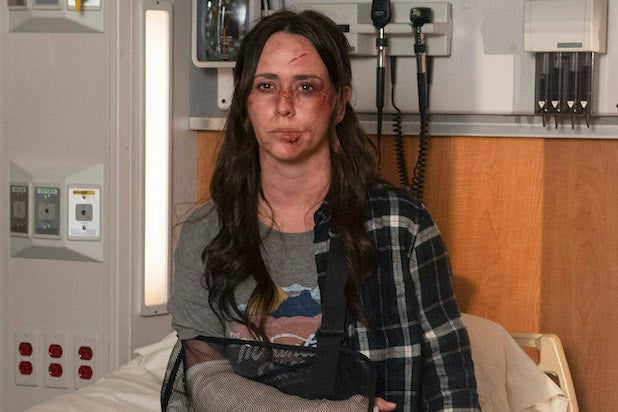 In flashbacks, Maddie carries on protecting Buck by giving him her Jeep and telling him to leave their parents, though she can’t go with him because she’s scared of her abusive then-husband, Doug (Brian Hallisay), and refuses to tell Buck. Buck then goes out to find his way in the world, trying odd jobs like bartending before ultimately landing at Station 118 in Los Angeles.

“There’s a really lovely scene in the episode, for me, where a young Buck tells Maddie that he knows he’s going to be something, he just doesn’t know what it is yet,” Stark said. “And then I think we get to see all these different iterations of Buck. He kind of just tries on all these different hats, as I think a lot of late teen, early ’20s do. Not many people know their thing yet, but they know that it’s out there to be found and he just has to work his way through them until he finds himself in the right place. He was always destined to be a firefighter, harking back to, he was born to save somebody’s life. And then even once he has that job, he still has that same mentality. It’s just all coming from a subconscious place until he is finally able to put it down to the circumstance of why he was born.”

Buck uses his career as a firefighter as an escape during the episode, when the 118 races to save victims trapped in a five-alarm factory fire and Buck goes it alone, refusing to leave one man behind. But it’s not until his team is able to reach him inside that he is actually able to succeed in his mission.

“The mentality of Buck in that moment is that, everything he knows to be true has just had doubt cast over it,” Stark said. “And so the only thing he’s able to cling to is his identity of being a firefighter. So as much as he’s trying to save this victim at the emergency, I think he’s trying to save himself and trying to cling onto the only thing that he still knows to be true. And then that goes one step further when the rest of the 118 come in at the last moment and save the day. I think that shows Buck that, as kind of problematic and fraught as his true family has been, he has this other family around him that is always going to be there, they are always going to step in. As alone as he has felt, he’s not really alone, because he has these people that, as much as he’ll run into the fire to save these strangers, they’ll be right there next to him and they’ll put themselves on the line. So I think it comes full circle at the end of the episode there, when he realizes his family has always been there, it’s just not quite who he thought it was.”

After Buck survives that experience, his parents come to see him at the firehouse to explain their side of the Daniel story and to tell him they’re proud of him because he was born to save someone — and that’s what he does every day. Buck then goes to his sister and the two reconcile in a scene that includes a montage of all the key moments of the siblings’ relationship that fans have seen since Maddie joined the show in Season 2.

“That montage, that was not scripted,” Stark said. “So when I watched the episode I was surprised by it. There are a lot of moments in there that I hadn’t necessarily remembered we had been through. So it was such a lovely culmination of everything to come to this moment and end on that moment of realizing that they have always been there for each other. I’m a sucker for a good montage because they choke me up no matter what. But to especially watch one play out around that relationship, I think it’s such an important dynamic to the show. To have that reminder and have them remain strong throughout so much adversity in the episode was just a really heartwarming way to bring it all to a close.”

As for where Buck goes from here, Stark joked that he thinks Buck’s new therapist “is going to make a lot more money from him.”

“I think healing is not going to be immediate — but at least now he knows the root cause of his pain,” Stark said. “And because of that, he can take those first steps towards healing. In the world of ‘9-1-1’ we have a big cast; there are a lot of characters in there. So the spotlight moves from person to person, and we’ve really been focusing on his pain and it’s going to be something that continues to be there. But also, we’re going to get to see his growth and his healing through his relationships with the others — whether that be being there as an uncle or being there with Eddie and Christopher. So we’ll get to see his growth and his wounds healing… through the person that he can be to those around him.”