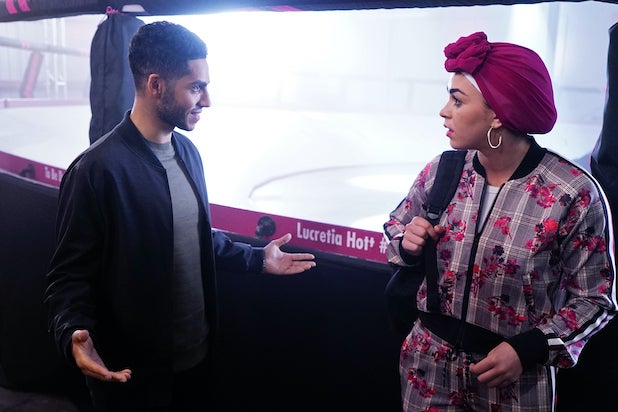 “9-1-1: Lone Star’s” resident badass, Marjan Marwani (Natacha Karam), loses the love of her life — so far — on tonight’s episode, which introduces fans to the man Marjan has been engaged to since she was 12, but never realized she actually loved until it was too late.

During the hour, “Friends With Benefits,” Marjan’s fellow first responders at Austin’s Station 126 meet her fiance, Salim (played by “Aladdin” star Mena Massoud). Salim comes to see Marjan to let her know he’s ready to get married now — not later — and that he’s ready to move on with another woman he’s seeing, because he thinks Marjan has never truly loved him.

It’s not until Marjan really thinks about her feelings for Salim that she realizes she has always loved him. But telling him that isn’t enough to save them as a couple, because she’s not able to let go of the idea that he’s found and promised himself to another woman — and she wants him to honor that commitment.

“She’s going to be heartbroken now, moving forward, because she lost something that she never really knew she had,” Karam told TheWrap. “I don’t think she has a romanticized notion of romantic love. I don’t think that’s ever been her thing and I think maybe she was trying that. She got swept up in a bit of a fairy tale that was never really her fairy tale when she showed up at his room and tried to do what they do in the movies. And then her heart wasn’t in it; she couldn’t follow through. Sometimes you can want something with your mind, but your heart just doesn’t allow it. And she knows that she can’t be the same with him ever again. So it’s a lot for her to process having found a thing, having lost a thing and now having to mourn it.”

Karam was particularly proud of how much of a punch Marjan’s heartbreak packs in the plot tonight, as her entire relationship with Salim is introduced and dissolved in just one episode.

“I think the writers did so well with getting the audience to be invested enough in the characters that you care when it doesn’t work out… I think it’s because of all the work they’ve put in to making Marjan likable. That makes everyone like, ‘Oh, whatever makes Marjan happy.’ Unfortunately, it’s just all so much more complicated than that. As she stands before him and kisses him for the first time, she realizes that she can’t get this other woman out of her head. And that, as much as in theory she wants to be OK with something, in reality, it’s a matter of different priorities.”

The “9-1-1: Lone Star” actress said she’s interested to see where these different priorities take Marjan now that Salim is out of the picture and a new world of possibilities have opened up in both her personal life and her career, which would have been cut short if she had gotten married.

“It’s been one of the given circumstances of her life, which is why she hasn’t really had to face it or devote herself to it very much,” Karam said. “And then she’s had to come full frontal and face it all completely within one episode and then to make the decision to let it go. So her given circumstances in life have now changed completely, which means she shouldn’t be the same person. Something big has shifted, something has changed and something that’s always been is no longer. I’ll be interested to see what space that opens up for her.”