It appears it’s going to be hard to watch the first few episodes of the third season of Fox’s “9-1-1: Lone Star,” quite literally, as the ice storm that hits Austin is swirling around our characters in the new promo released for the premiere.

In the video, which you can view above, Owen (Rob Lowe), Tommy (Gina Torres), T.K. (Ronen Rubinstein) and the other members of the team formerly known as the 126 are in a battle against the elements that are very unusual to Texas while spread out across the city after their station was shut down in the Season 2 finale.

Here’s Fox’s description for the opening of the third season of “9-1-1” spinoff from co-creators Ryan Murphy, Tim Minear and Brad Falchuk: 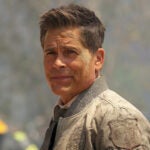 In the upcoming third season, after the events of the second season finale, the 126 is shut down and the crew is dispersed across the city. In the multi-episode opening storyline, a massive and unexpected arctic front hits Austin with an ice storm, causing widespread chaos. Can Capt. Owen Strand (Rob Lowe) and Capt. Tommy Vega (Gina Torres) not only save the city, but find a way to resurrect and reunite the former 126?

Showrunner Minear, who also runs the O.G. “9-1-1,” teased the third season of “Lone Star” for TheWrap last May while discussing the twist that saw Station 126 shut down by Owen’s frenemy Billy once he became Austin’s deputy fire chief after Owen turned the job down.

“I’m very excited for what that ending can mean for the beginning of Season 3. Because it’s kind of like if you took all the characters off the bridge of the Enterprise — which, of course, has been done over the last 50 years of ‘Star Trek’ — and you spread them to the winds of the Federation,” “9-1-1: Lone Star” showrunner Minear told TheWrap in a post-mortem interview about the Season 2 finale. “Eventually, you know that you need to reassemble that team. You need to get those people back together. In a way, the finale is a little bit of a fractal of where I want to go at the beginning of next season, because of the finale. There was a dust storm and everyone’s kind of blown to the four corners by the wind of circumstance and then by the middle or two-thirds of the way into the episode, all those players end up in the same place, because it’s almost like gravity. Those people are meant to work together as a team. So that’s what it should feel like. Then you slap a little Fleetwood Mac over that, what more can you ask for?”