The 118 is trying to rescue a man who is buried six feet under and quickly running out of air in TheWrap’s exclusive sneak peek from Monday’s “9-1-1.” Oh, and he was also shot, so the blood loss is complicating the already not-great problem.

In the preview from tonight’s “9-1-1,” which you can view above, Bobby (Peter Krause), Buck (Oliver Stark) and Hen (Aisha Hinds) arrive on the scene of an emergency called in by a man who has been buried alive in a coffin after a carjacking during which he was shot. This poor guy is slowly running out of air while on the phone with May (Corinne Massiah), who is trying to keep him calm from the call center so that he doesn’t hyperventilate to death before the team finds him.

As you’ll see, it’s not going to be the easiest job, seeing as May could only pinpoint his signal so much before being blocked by, well, the ground he’s buried under. The team spreads out to begin their search as Hen worries the man could bleed out fatally before he runs out of air. 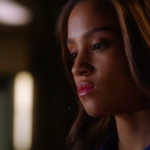 Meanwhile, it’s not entirely clear exactly how this all went down — or exactly why someone would go to the trouble of burying a man they carjacked.

Here’s the official description for Monday’s new “9-1-1,” courtesy of Fox. “The members of the 118 race to rescue a man who claims he was carjacked, shot and buried alive. Then, they arrive at a home where the owner thinks her roommate is a ghost, Hen receives a visit from the past and Athena and family are concerned that Harry is still haunted by visions of Jeffrey in the all-new “Ghost Stories” episode.