September 11, 2001 — one of the nation’s most tragic and unforgettable days. But public remembrances (or accidental tech glitches) from  AT&T, Marriott Hotels and Esquire proved on Wednesday — the 12th anniversary of the World Trade Center terror attacks — that sometimes it’s better to forget.

AT&T came under fire immediately after posting a Twitter picture featuring a smartphone taking a picture of the Tribute in Light memorial in New York City with the text, “Never Forget.”

Never forget what? That nearly 3,000 people lost their lives the day those towers fell, or that AT&T sells smart phones capable of stunning photography? Just over an hour later, the multinational telecommunications corporation removed the post and apologized.

“We apologize to anyone who felt our post was in poor taste,” the company tweeted. “The image was solely meant to pay respect to those affected by the 9/11 tragedy.”

A24 Films, the distributor behind theatrical releases including “The Spectacular Now,” “The Bling Ring” and “Spring Breakers,” flagged a deliciously tacky 9/11 remembrance at a Marriott Hotel.

Like AT&T, the chain has since apologized for one hotel’s attempt to give guests 30 minutes of cheap comfort food.

We are aware of the picture shared of an offer at one of our hotels, and we sincerely apologize for any perceived insensitivity. 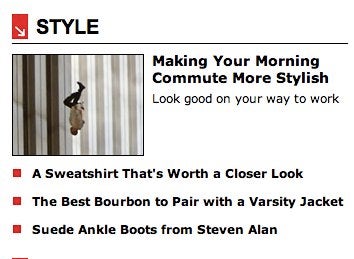 Although Esquire’s website was filled with thoughtful content reflecting on the 9/11 tragedy, a technical glitch made headlines as one of the most insensitive fails of the day. A photo of a man falling from the World Trade Center, which accompanies Tom Junod’s 2003 article “The Falling Man,” was inappropriately slotted next to a headline reading, “Making Your Morning Commute More Stylish (right).” The gaffe was only made worse by the publication’s semi-apologetic statement. “Relax, everybody,” a tweet reads. “There was a stupid technical glitch on our ‘Falling Man’ story and it was fixed asap. We’re sorry for the confusion.” Not that sorry, apparently. But maybe the publication will follow the advice of its readers next time.

After you offend the world, you may want a softer apology. @Esquiremag — Colin Balfe (@BalfeC) September 11, 2013

In Wisconsin, the Tumbledown Trails Golf Course has been offering a 9/11 deal to costumers since 2011, but it wasn’t until the bargain — just $9.11 for nine holes of golf — went viral that the general manager and other employees started receiving threats for the ad, according to the New York Daily News.

Max Muscle Fairfax, a sports nutrition store in Fairfax, Va., appears to have followed in the golf course’s footsteps by offering a similar deal — but in all caps — so maybe it’s a joke?

IN HONOR OF OUR FALLEN HEROS, TODAY WE WILL TAKE $9.11 OFF ALL PROTEIN PURCHASES TODAY!!!! NEVER FORGET!!!!

Let’s all take this as a lesson of what not to do when paying tribute to those all who lost their lives during one of the most horrific days in American history — and the aftermath of war.