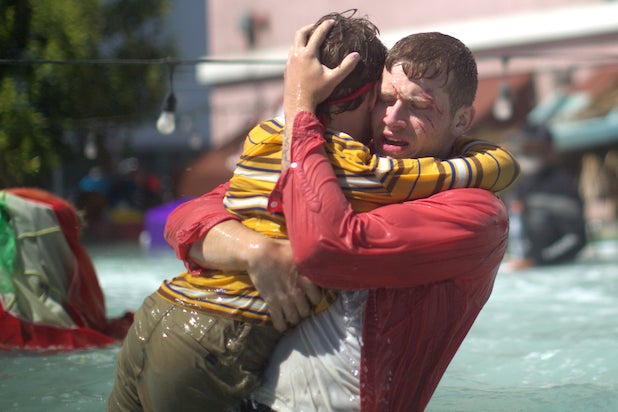 Come the end of Monday’s episode of “9-1-1,” Buck (Oliver Stark) is up the creek without a paddle. OK, pardon our pun, because this situation is actually quite serious: Eddie’s (Ryan Guzman) 8-year-old son with cerebral palsy, Christopher (Gavin McHugh), is missing after falling into the flooded streets of Santa Monica, following a massive tsunami that hit the beachside town at the start of the hour.

And now Buck, who has been watching Christopher during this disaster because they were at the pier when the wave came rolling in at the end of last week’s Season 3 premiere, is in a “do or die” situation, as Stark put it to TheWrap.

“It almost becomes, for Buck, more frantic and more chaotic because at the end of tonight’s episode, he obviously loses Christopher,” Stark told us. “And then it becomes this searching that he has to go through where it’s almost worse the fact that it’s not his own child, I think. If you lose your own child, then you’re screwing up your own life. But if you lose somebody else’s child, you’re screwing up your life and theirs.”

“So there’s this desperation that I think is on a whole other level,” he continued. “And it’s something that we’ve not really seen from Buck where it’s do or die. You know, he has to find this child. And even at the end of tonight’s episode, it’s suicide what he does when he jumps back in that water to go after Christopher and it’s almost a continuation of that: My life doesn’t matter. I have to find this boy.”

As showrunner Tim Minear and star Peter Krause, who plays Bobby, previously told TheWrap, portions of the two-part episode were shot in Rosarito, Mexico, where a crew reconstructed the Santa Monica Pier in the tanks James Cameron used to film “Titanic.”

“It really feels like you are in the ocean and it’s all this mayhem is happening around you,” Stark told us. “And most of my stuff down there was in the water and in the deep. And I think the hardest thing for me when making it– I mean, I’m pretty comfortable in the water, but the fact I had to do it all with an 8-year-old child on my back made me a little nervous at first.”

Also Read: '9-1-1' Chief on Premiere's Tsunami Cliffhanger and How They Sunk the Santa Monica Pier

“We did the first takes with Gavin’s stunt double and then when it came to doing it with Gavin, it was like a whole other kettle of fish — excuse the slight pun,” Stark said (And you’re excused, because we punned first). “But it kind of made it a lot better in some sense, because I didn’t mind if the stunt double’s head gets underwater, but as soon as I had Gavin there, it was like, ‘Right, I don’t care what happens, I have to keep this child above water.’ So I think it brought this whole new element of realism to it.”

And while Stark says he wishes he could tell you there was a moment McHugh was afraid during shooting all this, that just was not the case.

“He’s so damn up for everything that no, he just went along with it and he has such a good time,” the actor said. “And in all honesty, some of it was quite uncomfortable. You end up swallowing a lot of water and you have a lot of water in your face. And I’m kind of always having in the back of my head, ‘Oh my goodness, I hope he’s OK.’ And then every time you finish a take, they call cut and he says, ‘Can we do another one? Can we go again?’ He had the time of his life and that was so refreshing to be around and I feel like that kind of seeped into all of us sparked by his enthusiasm.”

As fans will remember, Buck has been sulking about the fact that his slow recovery from last season’s serious leg injury means he might not be able to work in the field as a firefighter anymore and could be stuck on desk duty moving forward.

This is why Buck was hanging out with Christopher on the Season 3 premiere in the first place, as Eddie pushed Buck into spending time with his son, who Eddie says never feels sorry for himself, despite the limitations he faces due to his cerebral palsy.

“That was definitely a clever and manipulative, one might say, ploy by Eddie — but in the most positive sense — to kind of use Christopher for that.”

And though Christopher was definitely helping Buck start to look on the bright side, Buck has a whole new mess of problems to deal with if he can’t find Christopher next week.