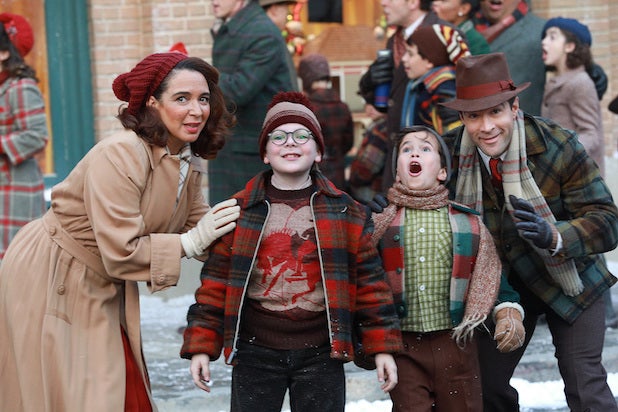 Bah humbug: Fox’s “A Christmas Story Live!” just got blindsided by NBC’s “Sunday Night Football” in early TV ratings. Oh, and every other broadcast TV show beat it as well.

The latest live television musical managed a 2.8 overnight rating/5 share in the 56 metered-markets monitored by Nielsen. Compare that with NBC’s “Sunday Night Football,” which posted a massive 12.3/21 last night. To be fair, that latter live telecast had the Dallas Cowboys.

Plus, football is still football and no one expected “A Christmas Story” to compete — it certainly could have done much better than it did, however. ABC’s “Sound of Music” (no, not the live one from NBC that started this whole trend) telecast posted a 3.0/5 on Sunday. Even all of the CBS shows beat this “Christmas Story.”

Last year’s hit “Grease: Live” hauled in a 7.4 overnight rating for Fox, but that one was in January and it did not have pro pigskin to contend with. Danny and Sandy’s budding romance brought in more than 12 million live viewers, and over 14 million when including three days worth of catch-up tune-in.

NBC’s “The Wiz Live” in December 2015 drew a 7.9 in these very preliminary returns. The Thursday special, which did have an NFL game up against it, eventually tallied 11.5 million live total viewers.

The following year, “Hairspray Live” landed a 5.9 rating from the 56 markets and just north of 9 million overall audience members. That one aired on a Wednesday when Fox’s “Empire” was its chief competition.

Sunday’s fast-national numbers, which are not time zone-adjusted, will be out around 8 a.m. PT this morning. Final live viewership totals are expected this afternoon.