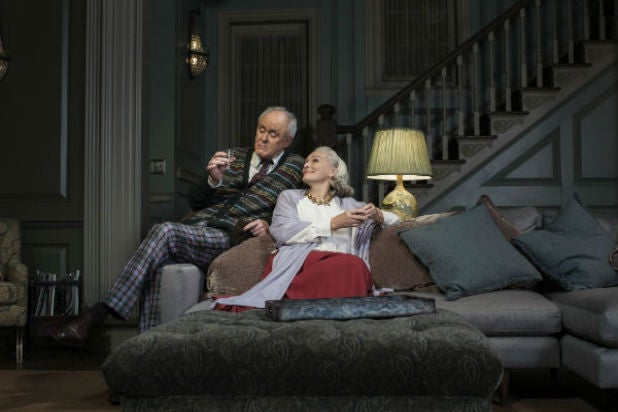 At least Glenn Close is entertaining and fun to watch in the new, blunt revival of Edward Albee’s “A Delicate Balance” that opened Thursday at the Golden Theatre in New York. Avid theatergoers like to revisit classic plays, not so much looking for the definitive production but a different interpretation of great, familiar material.

It’s arresting then to learn that Close’s strong and unyielding Agnes, matriarch of a family that’s not so much dysfunctional as nonfunctional, is at first glance a sister to Norma Desmond, the actress’s last portrayal on Broadway twenty years ago. Granted, Agnes is much more self-aware. She talks of going mad, Norma goes mad in “Sunset Boulevard.” Then again, Agnes and Norma both get to walk up and down marvelous staircases. And Agnes has this humonous opera house chandelier hanging in her living room. (Oops, wrong musical.)

When Agnes lectures her weak but very successful husband, Tobias (John Lithgow), or chastises her oft-divorced daughter, Julia (Martha Plimpton), or belittles her alcoholic sister, Claire (Lindsay Duncan), or when she welcomes her terrified friends Edna (Clare Higgins) and Harry (Bob Balaban) into her home for an indefinite stay, Close has this way of turning her black-button eyes into tiny holes that don’t so much see out as burrow their way into her skull. This Agnes has figured out life, wants everyone to know it, and isn’t going to budge for any of them.

It’s when that survivalist attitude, those opaque eyes, and the gray hair — pushed back off the face — all come together in act two that Norma Desmond is replaced by a more contemporary icon: Francis Sternhagen’s Bunny MacDougal from “Sex and the City.”

From Norma to Bunny, indeed, Close is entertaining and fun to watch. Her performance is also why this “Delicate Balance,” directed by Pam Mackinnon, is blunt and unsubtle. And turning Agnes into an uncompromising gargoyle is only part of the monochromatic scheme at work here. Not entertaining and fun are Plimpton’s merely loud Julia and Duncan’s monotonous Claire, a performance that exposes a serious flaw in Albee’s play: Claire, besides being clairvoyant and delivering a few amusing wisecracks, serves no function in act three. Jon Robin Baitz revisited this kind of drunken hanger-on sister in his play “Other Desert Cities,” but made the character vital to the action throughout.

Back in the 1960s, Albee was accused of turning his female characters into harridans. Mackinnon’s work with these three actresses, unfortunately, makes that case.

In the smaller role of Edna, Higgins offers more variety. As soon as Edna’s husband tells Agnes and Tobias that they’ve come to stay, her emotional breakdown tells us everything we need to know about this couple’s existential angst, or, as Agnes puts it, “the plague.” Even though Edna and Harry aren’t family, Higgins’ performance makes the best case for responsibility and how friends sometimes trump blood. Unfortunately for Tobias, Edna and Harry don’t turn out to be those kinds of friends.

In addition to Higgins, Lithgow and Balaban give some semblance of playing human beings. Lithgow’s delivery of Tobias’ famous cat speech is especially multi-faceted. The speech is a baffling digression — Tobias recalls a cat he had “killed” when the pet no longer “liked” him. Agnes disagrees, saying he had the animal “put to sleep.” No, Tobias insists, he had him killed. Too often in “A Delicate Balance,” Albee has a character “explain” his play. Even the play’s title must be explained by Agnes’s memories of a book she read about the delicate balance of the sexes and how it’s being thrown off kilter.

Tobias’s pained, confusing confession festers in the first act of “A Delicate Balance,” and then lingers unexplained. By play’s end, however, it’s clear that the cat isn’t the only one who’s turned on Tobias.