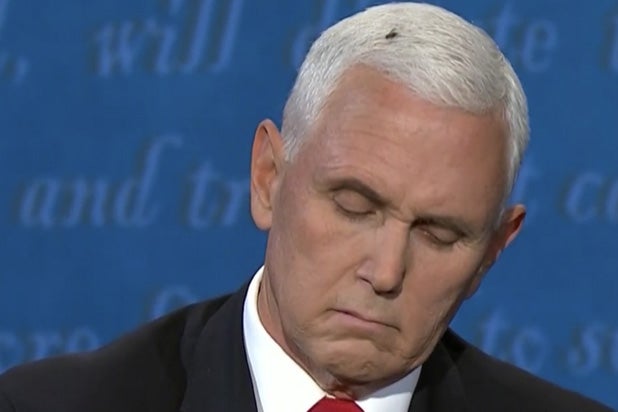 In what will go down as likely the most memorable moment from Wednesday’s vice-presidential debate, a fly landed on Mike Pence’s head and remained there for more than a minute before flying off. No, really.

During the last half hour of the event, the fly buzzed in and parked itself on some prime real estate — the right side of the vice president’s head where, thanks to Pence’s bright white hair, it stood out plain as day until, just as visibly, it buzzed off.

But don’t take our word for it. Watch it land on him here:

Unsurprisingly, the Fly quickly became the darling of social media, vastly eclipsing the previous most-talked-about thing from the vice presidential debate, Pence’s eye, which looked puffy and bloodshot. (Read about that here.)

Among those who noticed the embarrassing moment was vice-presidential candidate Kamala Harris’ running mate, Joe Biden, who had a pretty funny troll ready to go very shortly after the debate ended:

The Biden campaign also bought the URL “flywillvote.com,” which redirects to the voter registration website I Will Vote. But, of course, Team Biden weren’t the only ones who found the unexpected event amusing.

“Hey waiter! I’ll have the soup. Mike Pence will have some s— for his fly,” Stephen King tweeted.

In fairness, a fly also briefly landed on Hillary Clinton during the second presidential debate in 2016 — but it didn’t stick around for quite as long.

one fly on the cuckoo’s nest

Shoutout to the fly.

Does Mike Pence have a pulse? The fly and I have want to know! #KamalaWonTheDebate

The fly when it realized it was Mike Pence’s head it landed on: pic.twitter.com/uvaIEt3S1a

the fly on mike pence's head in 2-14 days pic.twitter.com/rtWu5QhlpA