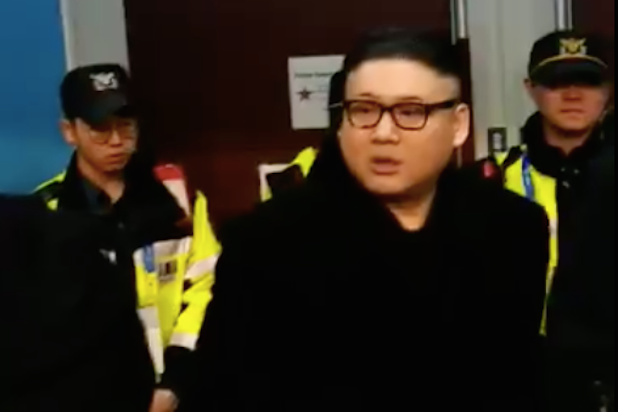 North Korea’s bizarre army of slave cheerleaders didn’t know quite how to react after they were paid a surprise visit by a man named Howard — who also happened to be a dead ringer for North Korean dictator Kim Jong un.

Bevins reported that Howard, who spoke English with a British accent, was promptly detained by South Korean police who were unclear exactly what to do with him or whether to charge him with a crime.

“What are we doing here?” said Howard addressing police and a large crowd of curious onlookers after casuing a minor frenzy. “This is crazy. We got about ten policemen. What do you think I’m going to do?”

Howard said he had committed no crime and couldn’t help his resemblance to the North Korean tyrant.

The argument seems to have carried the day and Bevins’ reported that he was shortly released.

You can read the wild thread here.

At the united Korea vs Japan womens' hockey game, an apparent Kim Jong-un impersonator starts dancing in front of North Korean cheerleaders. Apparent employees of the DPRK push him aside. He's now sitting nearby giving interviews (in English) pic.twitter.com/PeVJYtri5Y

Police have now surrounded and asked the apparent impersonator to come with him, he says his name’s Howard, was just cheering and looks like this, and didn’t commit any crime. Refuses to go with them. South Korea police apparently unsure what to do pic.twitter.com/pGzvV0ufcq

He speaks English with UK accent, no Korean.

They’ve now told him he broke a rule against making political statements. He responds:

“I just showed up with my flag and my face… If you don’t like my face there’s nothing you can do about it, I was born this way.”

They’ve now taken him into a room in the hallway and closed the door. pic.twitter.com/x2MT4MAVAj

I don’t speak Korean either, but my sense was police didn’t know what to do with him. If he was breaking a rule or just making an obvious commotion and drawing a crowd. This just happened in front of me, and I’m unlikely to find out more. Maybe we’ll hear Howard’s story later.

Seems he was released. Caught him walking out, waving as high school girls laughed. “Cosplay!” they giggled pic.twitter.com/xnFlco2UjC