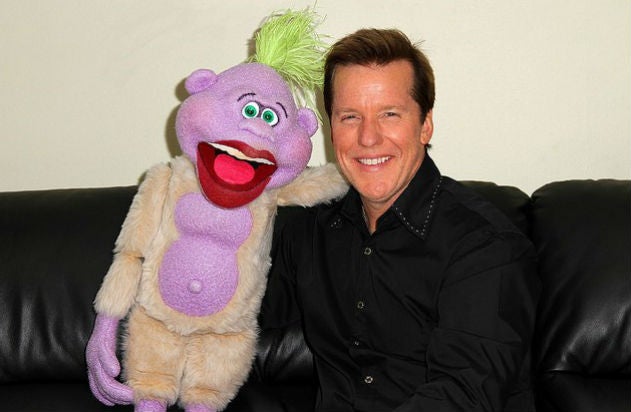 Thomas Fauquher and Debby Milatz-Greenspan had the pleasure and opportunity to spend time with Jeff recently and asked him some personal questions. He is intelligent, endearing, articulate, genuine, and down to earth, just like you knew he would be.

It is a very rare feat when an actor transcends their identity and brings the character they play to life. A prime example is any one of the members of the television show, “Friends,” who we affectionately refer to as Ross, Rachel, Chandler, Monica, Joey, and Phoebe. One entertainer has not only done it once in his career, but at this point in his life, he has done it six times.

His name is Jeff Dunham and he has warmly introduced us to his suitcase full of “friends,” known as Peanut, Walter, Bubba J., Jose Jalapeno on a Stick, and Achmed the Dead Terrorist to name just a few. Devoted fans follow him and his work from state to state and even continent to continent, sometimes waiting excitedly for hours to attend a performance for the marvelous experience they know awaits them — because Jeff delivers every time. His unparalleled talent and success has earned him the distinction of being the highest grossing comedian of his time, and the recognition as being an international superstar, as the world’s greatest ventriloquist.

Thomas Fauquher and Debby Milatz-Greenspan: What is the most misunderstood characteristic or behavior you have?
Jeff Dunham: I’ve never been truly hammered … Never. Not even in college. I was too busy driving or flying away on weekends doing shows around Texas and the country. I’ve also never smoked weed or done drugs. How the hell am I in show business?!?

Your comedic talent and the way you entertain and inspire people is unparalleled. What advice can you give to people on pursuing their dreams?
In the theatre my wife Audrey and I saw “Guardians of the Galaxy,” which is absolutely fantastic. At the end of the film, director James Gunn was being interviewed and he said something along the lines about following your dreams being a mistake, and that you should instead follow what you do best. I disagree about this disagreement. I think it’s a combination of the two: Follow your dreams, but hopefully your dreams are to be something that you’re good at … Or at least you have the potential to be really good at. And then make sure you have a passion to be the very best at that. If you suck at what you do, don’t be a moron; Find another “thing.”

You are arguably the six greatest comedians in the world. You plus Walter, Peanut, Achmed, Bubba J. and Jose. What can we expect from your comedic genius in the near future?
Seven.

One of your newest characters, Achmed Junior, you created using an innovative technology of 3D Laser printing with a layered polymer construction. Can you give us a hint as to what new technologies are in store for your next character?
I honestly go back and forth in my head about using advanced and innovative technologies for creating my characters. There’s something more “real” and charming when the characters aren’t perfect. It’s the difference between anything that’s built by a computer and machine versus the same thing being made by hand. There’s a charm with imperfections that no machine can duplicate. So at this point, I still sculpt, by hand, the original heads from clay. Then the 3D scanning and printing is simply duplicating whatever I have done by hand. They are then imperfect and unbalanced faces, which gives them more character. If you ever see a perfectly symmetrical face, it doesn’t look right and it’s uninteresting, but you usually don’t know why. I’m more interested, for example, in looking at a tree that’s been mangled and gnarled by the elements, and thus grown crooked and imperfect, than I am with one that’s experienced no adversity and contains no flaws. That analogy can be further carried over to comedians … Usually the best comics are the ones who have lived through adversity and thus have much more to draw from in their lives to create good material.

You have had tremendous success with live performances, DVD sales, and exploding merchandise sales. Besides the instructional material included in the Little Jeff package, do you intend to do any instructional videos or performances on ventriloquism for the main stream public?
No … Ventriloquism is simply a skill that anyone can learn in ‘X’ amount of time. It’s like learning a sport or playing a musical instrument. A teacher can only teach so much. The basics are the basics. After that, it’s up to the student or athlete or musician to practice and rehearse and perfect. You can’t teach showmanship. You can’t teach someone to be funny or timing or how to truly entertain. All those take the 10,000 plus hours of perfecting one’s craft or one’s art form or one’s sport. The magic in performing as an entertaining ventriloquist happens when the characters come to life and the interaction between the separate personalities on stage becomes “real.” Then don’t forget that the act has to be funny, and to me, being funny and entertaining any given audience is more important than anything. And those you can’t teach. Those take experience.

You’ve toured the world and have entertained millions of people from different backgrounds, cultures, religious beliefs, etc. What have you learned about the world’s humanity?
When my act was successful in each of the countries that I performed in on our last World Tour, places as different and diverse as Iceland, Norway, the UK, Ireland, Abu Dhabi, Israel, Australia, South Africa, Malaysia, Singapore — I came to the conclusion and keep the hope that most people in the world are good, and we all have the same concerns: Family, good health, a solid roof over our heads, friends, a good job. So that means we all laugh at the same things too. I changed my act very, very little, no matter what country I was in and what audience I was in front of. I think all the garbage in the world is thanks to a very small handful of idiots.

Several individuals have stated you see life differently than most people. That you have a hyper sense of awareness in how you view the environment and the diverse cultures in it. What do you think gives you that ability and that edge?
Well, thank you. Just like any good comic, I think that the hours and hours on stage, talking to people in the front rows one on one while performing, plus traveling from audience to audience and entertaining them successfully, and many times not so successfully, has helped me to have instincts for people. Their moods and how to communicate effectively. And mainly to be able to anticipate how an audience will react to what is said and how you say it. As any orator learns, words are powerful. Nuances in speech can make or break a joke, and when learning that, you learn about people.

Most people are unaware that you give so generously to a number of charities. What causes are the most meaningful to you?
Most of us take for granted our amazing lives. We take for granted simple things like having enough food to eat or a place to sleep or a roof over our heads at night. Charities that deal with those basic human needs are where I’ve given most in the past. I also hope to be succeeding with some plans with a couple of children’s charities in the not-so-distant future.

You have touched the hearts of so many that have only a short time to live. You have lifted their spirits and have fulfilled their dying wishes by spending time with them as they deal with their health issues. On the flip side, how do these types of interactions impact your life?
They make me realize how precious life and good health is. It reminds me to remind my own children how blessed we are, living easy lives with so few concerns. It makes me realize how stupid some of my own irritations are. It makes me happy that I can bring a few laughs and smiles to those who need it more than anyone.

Recently, you helped one of your daughters set up her new college apartment. How challenging is it for you with your busy schedule to have a “normal” personal life which includes a new marriage where you just celebrated your two year anniversary, congrats by the way, raising your three daughters, and having time for yourself with all the success you continue to achieve and the demands on your time?
It’s as simple as setting the time aside and saying “no” when something comes up that will conflict with what’s more important. When my girls were growing up, I never missed a birthday and never missed a meaningful holiday. I was very lucky and blessed to have been able to do that.

Besides being a comedic mastermind, you build and fly full size helicopters, design and create your characters, and are on the cutting edge of main stream comedy to name just a few of your endeavors.. Where do you see yourself ten years from now?
I hope my wife and I will be right where we are now. Sitting next to each other on the couch in our house with a dog between us, and hopefully laughing at some little kids being goofy. Career-wise, I always say, I hope things are succeeding better now than they were last year, and next year they’ll been better than they are now.

Jeff Dunham’s latest Comedy Central special, extended and uncensored “Jeff Dunham: All Over the Map” is now available for order in SD and HD on Amazon Instant Video and is available for download on Amazon Instant Video, iTunes, Xbox Video, Sony Entertainment Network, Vudu and Google Play. Beginning Nov. 28th, Jeff will be setting up residence in Las Vegas at Planet Hollywood.

BIO Thomas Fauquher and Debby Milatz-Greenspan
Thomas and Debby are seasoned professional ​photojournalists with over 30 years of experience in the field specializing in commercial and portrait photography, as well as weddings, sporting events, and street photography. They can be reached at thomaspaulmichael@gmail.com. To view some of their work please visit: www.thomaspaulmichael.com

Thomas and Debby are seasoned professional ​photojournalists with over 30 years of experience in the field specializing in commercial and portrait photography, as well as weddings, sporting events, and street photography. They can be reached at thomaspaulmichael@gmail.com. To view some of their work please visit: www.thomaspaulmichael.com