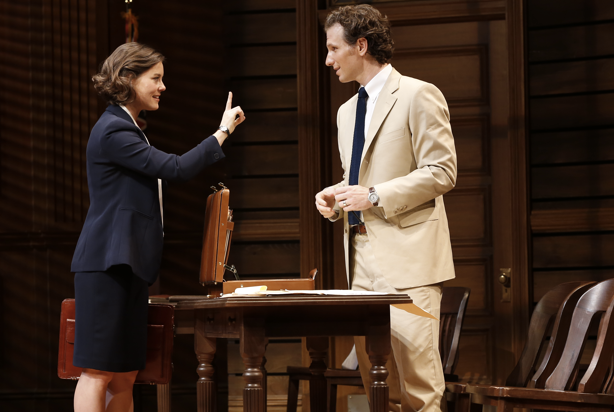 Despite a hot button storyline involving race and revenge, the Broadway production of  “A Time to Kill” was greeted with a puzzled response when it was announced last summer.

After all, though Hollywood has routinely raided author John Grisham’s back catalog, none of his other best-selling novels had previously been adapted for the stage.

Moreover, it has been more than 20 years since Grisham launched his career with the legal thriller and more than 15 years since a film adaptation put Matthew McConaughey on the map, but the stars of the new stage adaptation insist the timing is propitious for a new version of the court room drama.

“It’s become almost cliched to say that a play is timely, but it’s cliched for a reason,” Sebastian Arcelus, the “House of Cards” star who is stepping into McConaughey’s role as a crusading attorney, told TheWrap. “The play may be set in the 1980s at a different point in our racial disharmony, but even though we have an African-American president and some people think we live in a post-racial period, we’re still asking the question of if justice is really blind?”

It’s a question that was frequently raised this summer as a Florida jury deliberated over whether or not to let George Zimmerman go free for the shooting death of an African-American teenager named Trayvon Martin. Zimmerman was ultimately acquitted.

It’s also an issue that has been roiling the city where “A Time to Kill” debuts, as a debate rages over the New York City police department’s stop-and-frisk program, which has seen officers detain and search a disproportionate number of African-Americans and Latinos. The controversy over the public safety risks and rewards of these policies became a key issue in the Democratic mayoral primary and was seen as a contributing factor in the victory of Bill de Blasio, who made his opposition to the program a key campaign point.

“It makes me shudder, because we’ve come so far in so many ways, but we’re not even close to where we need to be in other ways,” Ashley Williams, the “How I Met Your Mother” actress who co-stars as an idealistic law student, said. “But the play is about more than just race. It’s about when is vigilante justice okay and when is it not.”

That’s certainly the issue at the heart of  playwright Rupert Holmes’ (“The Mystery of Edwin Drood”) take on “A Time to Kill,” which like the novel and movie, centers on a black man who shoots the men who raped his young daughter. Williams and Arcelus insist that the play is more interested in raising questions than it is in answering them, and notes that “A Time to Kill” is structured so the audience acts like a jury as the characters debate the father’s decision to take the law into his own hands.

“Is vigilantism wrong? Of course it is,” Arcelus said. “But the deeper question at hand is are these issues as black and white as they appear to be? We want the audience to walk away asking questions about how they would have ruled.”

In a theatrical season that highlights big name stars like Daniel Craig and Orlando Bloom hitting the Great White Way, Grisham’s name will provide the play’s major selling point. The show co-stars such notable character actors as Fred Thompson (“Law & Order,” former Republican presidential aspirant) and Tom Skerritt (“Picket Fences”), but does not have a star on the magnitude of that other Hollywood talent. It’s not at a complete disadvantage, however. With novels like “The Firm” and “The Pelican Brief” on his resume, Grisham is one of the most successful figures in publishing, having sold more than 250 million copies of his work worldwide.

Despite the important role “A Time to Kill” played in his career, the actors say that Grisham gave Holmes his blessing to tweak the 600-page story for the stage and has been hands off during the whole process.

The biggest lift Grisham may have given the cast is the timing of his next novel.

“Sycamore Row,” his latest legal thriller and a sequel to “A Time to Kill,” hits stores on Oct. 22, two days after the play premieres on Broadway.

“He let us fly on our own, but I feel like the book release is the greatest gift he could have given,” Williams said.