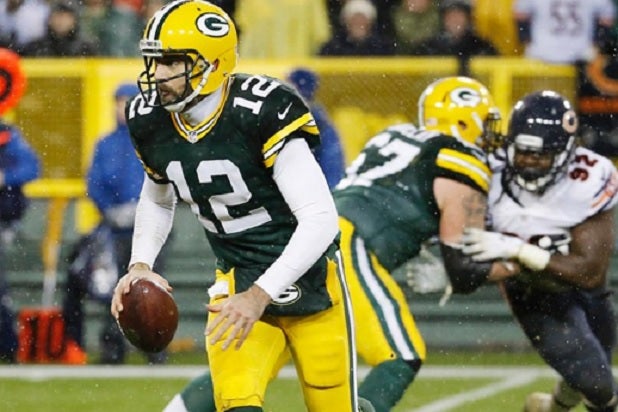 TheWrap has partnered with Canvs, the emotion measurement AI company, for a weekly look at some of the characters and personalities that have TV viewers the most worked up on social media. The data below covers Sept. 5-11 and is drawn from the most emotionally reacted-to television programs, including broadcast, cable, streaming and PPV.

The Green Bay Packers quarterback, a tennis star and an ex-boyfriend had viewers talking passionately on social media over the past seven days.

NBC’s broadcast of the Chicago Bears vs. Green Bay Packers NFL game sparked 180,050 Emotional Reactions (ERs), with Packers quarterback Aaron Rodgers driving a ton of the emotional conversation. Rodgers sustained a knee injury in the second quarter, which had fans worried he wouldn’t return — and may in fact be out for the season. But he limped back on the field in the second half (when the Packers were trailing 17-0) and orchestrated a stunning comeback, which ended in his team winning 24-23. Viewers were astonished and showered him with praise.

Aaron Rodgers’ arm and brain are so good that if you literally take away his left leg, he’s still the best QB in the league. Unreal.

That was one of the best comebacks I have ever seen.

RODGERS IS JUST UNDOUBTEDLY THE GOAT

PACKERS WIN!! Amazing game!! The Bears have a great team this year but Aaron Rodgers killed it during the 2nd half! GO PACKERS!!! ???? https://t.co/LvoNQqlUN0

Aaron Rodgers is so fun to watch. Sometimes you just have to sit back and realize that you're watching one of the greatest of all time.

Social media went nuts during the U.S. Open Women’s Final, which was broadcast on ESPN and generated 133,284 ERs. During her match with Naomi Osaka, Serena Williams had multiple emotional exchanges with umpire Carlos Ramos, which resulted in three violations, including a game penalty. Williams ended up losing to Osaka, who became the first Japanese player to win a Grand Slam. Fans on both sides weighed in about the violations, with some saying Serena stepped over the line and many others defending her and saying she was treated unfairly.

I’M SCREAMING!!!!! SERENA WAS ROBBED! AND SHE’S STILL A BENEVOLENT AND CLASSY QUEEN IN THE MOMENT — NAOMI DESEVRES NO HATE! THIS WAS JUST BS https://t.co/bcLRvWo8mt

Serena is back to her old ways of thinking the rules don't apply to her.glad she lost and congratulations to Naomi.

Double standard in action. Too bad for Naomi but not Serena’s fault. Women can’t get angry when treated unfairly as Serena was.

That really broke my heart. I am all about Serena but I am so sad she felt like she needed to apologize https://t.co/HmfX11q8We

An episode of HBO’s “Insecure” garnered 20,746 ERs, with fans going crazy over the return of Lawrence Walker (portrayed by Jay Ellis). Lawrence had a large role in the first two seasons as main character Issa’s boyfriend, but the show had moved on with cast members claiming he would never return. Naturally, viewers were shocked — and many were thrilled — to see him pop up again. Some viewers even congratulated the show for keeping the secret.

Y’all got us thinking Lawrence was gone lol. But you had me dying laughing this episode the best so far. You are hilarious

Why does @IssaRae got make everything so real??? Like Lawrence popped up like everybody’s ex be doing when we prospering and I’m pressed.