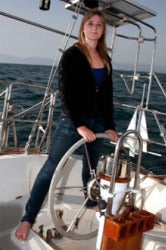 Producers of a reality TV project featuring Abby Sunderland were "relying on her dying" from the start, the 16-year-old’s father said Monday, prompting the family to cut ties with the show.

Sunderland ended her attempt to become the youngest person to sail the globe solo last Thursday after 138 days when her boat was damaged in rough seas in a remote area of the Indian Ocean. She sent out an emergency signal and was saved by a French fishing boat on Saturday.

Before her trip reached its premature end, the Sunderland family signed a contract to work on "Adventures in Sunderland" with Magnetic Entertainment. The show would have featured the entire family, including Abby’s 18-year-old brother, Zac, who completed his own solo circumnavigation between 2008 and 2009.

On Monday, Abby’s father, Laurence Sunderland, said he had cut ties with Magnetic at a press conference in front of the family home in Thousand Oaks, Calif.

“There is no show at this time," he told reporters, "nor will there be."

The elder Sunderland said Magnetic had been unable to sell the show. He also accused them of hoping Abby’s voyage would go badly from the start, and had planned to depict the family in a dark light.

“They were assuming Abigail was going to die out there," he said. "They were relying on her dying, and so we cut the ties."

Neither Laurence Sunderland nor Magnetic Entertainment responded to requests for a comment on this story.

Abby’s voyage on the ship Wild Eyes was financed by her family and a slew of sponsors including Oakley sunglasses, Shoe City and Patagonia. Critics have accused the Sunderlands of  irresponsible parenting for allowing their children to undertake such dangerous journeys.