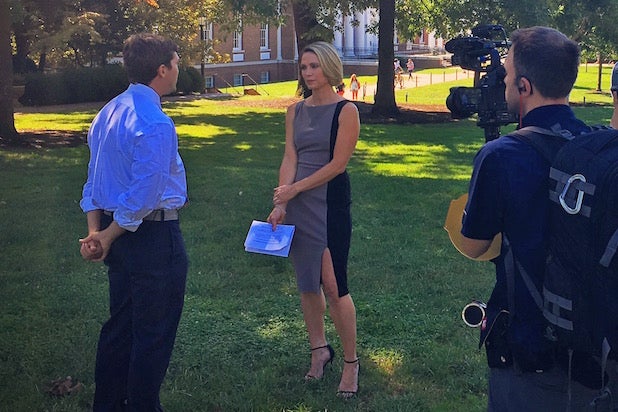 “Good Morning America” news anchor Amy Robach went back to University of Virginia for a fresh look at the notorious, now-debunked, gang rape article that appeared in Rolling Stone that has ruined lives, sparked civil lawsuits and will be reviewed in journalism classes for years to come.

The 9,000-word feature in Rolling Stone magazine has since been labeled a hoax. The detailed story of the gang rape of University of Virginia student “Jackie” at a frat party ignited outrage over the handling of sexual assault on campuses nationwide.

“I can’t imagine a journalism school not talking about this story and teaching their students about how to avoid some of these pitfalls,” Robach told TheWrap. “I have a pretty good idea of what they teach when it comes to sourcing and ethics and I think this story will be examined.”

Shortly after it was published in 2014, details of the article were brought into question. Eventually, Rolling Stone retracted the piece and apologized. Robach will examine the consequences in Friday’s edition of “20/20,” titled, “What Happened to Jackie?”

Robach interviewed former UVA Associate Dean of Students Nicole Eramo, who is speaking publicly about what she called the “horrifying” fallout from the article for the first time on the eve of her defamation civil trial that kicks off Monday.

“She talks about the death threats she received, how she could barely go to work and her fear of being fired. Since the article came out, she has been removed from her former position and no longer works directly with students,” Robach said of Eramo. “You will hear a very emotional interview about what her life is like now.”

Eramo’s lawyers are attempting to prove “Jackie” made up a guy to make another guy romantically jealous. The whole tale wound up painted as a true story in Rolling Stone, and now Eramo is heading to court.

Eramo is suing Rolling Stone for damages she incurred because of the release of the infamous article.

“She says she became public enemy No. 1,” Robach said. “She said her life changed forever and will never be the same.”

Robach also spoke with the friends of “Jackie,” who were with her the night that she claimed she was brutally sexually assaulted.

“They talk to us and tell us their version of events, these were not included in the Rolling Stone article. The reporter, Sabrina Erdely, never reached out to them directly to get their side of the story,” Robach said. “It is vastly different from what was printed in the pages of Rolling Stone.”