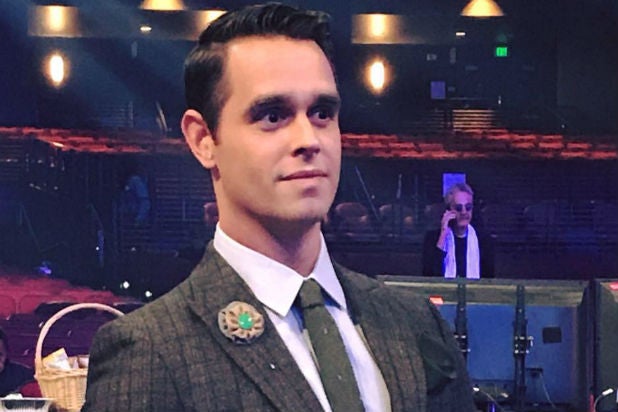 Karl Schmid, an on-camera reporter for ABC’s Los Angeles affiliate, came out as HIV positive on Friday night in a powerful Facebook post about stigma and acceptance.

The 37-year-old Australian import covers human interest stories and Hollywood on ABC7, reporting from events like the Academy Awards and the annual Vanity Fair Oscar party. After a decade living with HIV, Schmid said he came forward despite numerous industry peers urging him to stay quiet.

“For 10 years I’ve struggled with ‘do I or don’t I?’ For ten years the stigma and industry professionals have said, ‘don’t! It’ll ruin you,”’ wrote Schmid.

“But here’s the thing. I’m me. I’m just like you. I have a big heart and I want to be loved and accepted. I may be on TV from time to time, but at the end of the day I’m just an average guy who wants want we all want. To be accepted and loved by our friends and family and to be encouraged by our peers,” he said.

The post tagged charity T-shirt project The AIDS Memorial, which shares stories of “love, loss and remembrance” of those affected by the disease.

“Labels are things that come and go but your dignity and who you are is what defines you. I know who I am, I know what I stand for and while in the past I may not have always had clarity, I do now. Love me or hate me, that’s up to you. But, for anyone who has ever doubted themselves because of those scary three letters and one symbol, let me tell you this, you are somebody who matters,” he concluded.

Also Read: 'BPM (Beats Per Minute)' Star Warns AIDS Epidemic Is Not Over

While HIV/AIDS visibility is still scarce in the entertainment industry, filmmakers have gone back to the roots of the epidemic to great success in recent movies. Robin Campillo’s triumphant “BPM,” about early AIDS activists in Paris in the 1980s, won the Grand Prix at the Cannes Film Festival last year and took Best Picture at the César Awards, France’s Oscars.

Weeks ago at SXSW, Yen Tan’s “1985” captivated with its narrative about a gay, closeted, HIV-positive man (Cory Michael Smith) going home for Christmas for what is likely the last time.