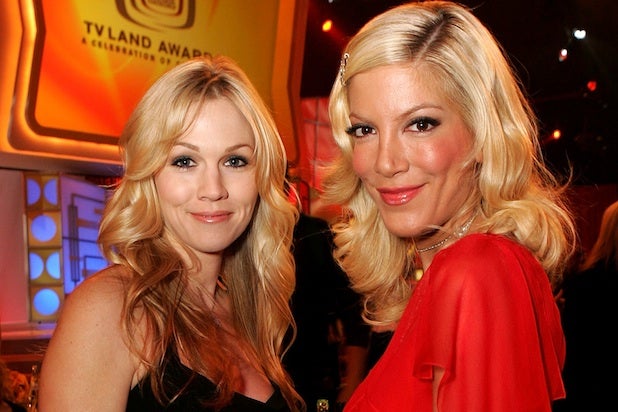 Production will commence on both series in Los Angeles in early-2014, and both will premiere this year, as well.

“It’s great to start the new year and my tenure at ABC Family with the pickup of these two funny original series,” ABC Family President Tom Ascheim said in a statement.

He continued, “ABC Family’s comedy lineup continues to resonate with our audience and I’m thrilled to boost that momentum by adding ‘Mystery Girls’ and ‘Young & Hungry,’ which are sure to become fan favorites”

Starring and executive-produced by Spelling and Garth, “Mystery Girls” follows two former detective TV show starlets who are reunited by a real-life mystery. Miguel Pinzon (“A New York Love Story”) stars as a fan and witness to a crime who will only speak with the former TV stars. Maggie Malina “Single Ladies” also executive produces.

Aside from Tisdale, the series is executive-produced by Eric Tannenbaum and Kim Tannenbaum (“Two and a Half Men”), CBS Television Studios, Relativity Television and Jessica Rhoades (“Sharpay’s Fabulous Adventure”).

“We are excited to expand our comedy brand with two new series that build on our already solid comedy block of hits, ‘Melissa & Joey’ and ‘Baby Daddy,'” said the network’s chief creative officer and executive vice president of programming and development, Kate Juergens.

“Viewers are excited to see Tori Spelling and Jennie Garth back on television together again, and will fall in love with ‘Young & Hungry’ star Emily Osment in these comedies that bring us fun, new characters with which to laugh out loud,” she continued.