ABC entertainment president Stephen McPherson told TheWrap that he’s hoping the network’s new primetime schedule will shore up the 10 p.m. hour on Tuesdays and Wednesdays – as well as bring more male viewers to the network overall.

ABC announced Tuesday morning that it is adding 10 new shows overall — six dramas, three comedies and a reality show — with seven of them on the fall schedule. And it plans to work in two more before mid-season. (See the full schedule.) 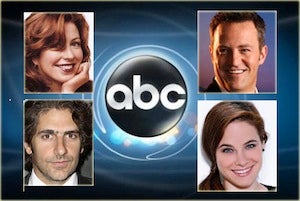 McPherson greenlit fewer new shows for next season than he did for the current season — where he added four sitcoms and a drama — but pointed out that last year he had an entire Wednesday night to fill. Three of those four comedies are returning, so this time he had one comedy opening on the night, plus filling the 10 p.m. slot.
Of the three comedies, "Better Together," a relationship sitcom, will fill that one opening, airing at 8:30 p.m. Wednesday leading out of this year’s solid freshman sitcom "The Middle" and leading into the highest-rated new sitcom this season, "Modern Family.”
He said the other two comedies — "Happy Endings" and "Mr. Sunshine"" — will be worked into the Wednesday night block sometime in the fall rather than waiting for mid-season.
McPherson said “Endings,” a sitcom about relationships and friendships, and "Sunshine," starring Matthew Perry as a sports arena manager who has a complex relationship with his female boss, "tested among the highest of any comedies we’ve ever had [during pre pickup audience testing]."
In addition to working them in on Wednesdays, McPherson said he will give them a solid lead-in platform by placing airing them after "Dancing With the Stars" when that show extends to 90 minutes during the fall season. (Similarly, Fox announced Monday it was extending the “American Idol” perfomance shows to 90 minutes when that show returns in January.)
Clearly the biggest male draw new show will probably be "Detroit 1-8-7,” a drama about a Detroit homicide detective squad starring “The Sopranos’” Michael Imperioli” that will air Tuesdays at 10.
But each of the new dramas has some appeal for everybody. And most of the dramas McPherson greenlights are not the traditional types of TV dramas:
– "No Ordinary Family," with strong male lead Michael Chiklis (“The Shield”), is about a couple whose marriage is going stale after 16 years until they survive a plane crash and discover they now posses superpowers.
– "The Whole Truth" is a legal drama that chronicles the way a case is built from the perspective of both the defense and prosecution.
– "My Generation" is about a group of people who return home 10 years after graduation from high school and how they feel about their successes and failures.
– "Body of Proof" stars Dana Delaney as a medical examiner who has to juggle work and her personal life.
– Mid-season drama "Off the Map" is a medical drama from "Grey’s Anatomy" and "Private Practice" creator Shonda Rhimes, that has American doctors practicing medicine in a small town in the South American jungle.
Five of the six dramas on next year’s schedule were produced by ABC Studios. The lone outsider is "The Whole Truth,” produced by Bonanza Productions, in association with Jerry Bruckheimer Television and Warner Brothers Television.
McPherson told TheWrap that freshman sci-fi drama "Flash Forward,” which most critics had projected at the start of this season to be a sure hit, was not renewed because "in the end, the creative didn’t deliver at the levels that we wanted."
He said this season’s other sci-fi drama, "V", will be back, airing on Tuesday nights during midseason.
McPherson also gave a vote of confidence to "Desperate Housewives,” which some critics have said seems to have run its course. He told TheWrap that ABC will be making some new casting additions shortly.
And he also sees "Grey’s Anatomy" continuing to be paired with "Private Practice.” "That combination is working," he said. "The two shows have a good dynamic together."