"The Secret Millionaire" has found a new benefactor: ABC.

The network has ordered six episodes of the RDF USA-produced feel-good reality show, which originally aired on Fox last December. The series did surprisingly well in the ratings, prompting speculation that Fox would order a second season.

But the network apparently never formally renewed the show, and its option for doing so expired in July, according to industry insiders. Multiple networks are believed to have expressed interest in picking up the project. 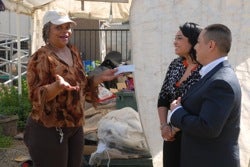 ABC, however, seemed to have the inside track, perhaps because "Millionaire’s" sunny tone makes it a natural fit with the positive brand of reality that characterizes the network’s hits such as "Extreme Makeover: Home Edition" and "Dancing with the Stars."

Production on the new cycle of "Millionaire" is expected to begin soon. There’s no word yet on an airdate but early 2010 would seem logical.

"This is a format we’re extremely proud of and ABC is a wonderful home for the show" Coelen, CEO of RDF Media USA, told TheWrap.

He added that the show would keep the same basic feel of season one.

"Secret Millionaire," which is based on a British format, features wealthy benefactors who go undercover in poor neighborhoods to see how the less fortunate live. They then distribute money to the people they met, revealing their true identities in the process.

RDF USA now has three primetime series at ABC. In addition to "Millionaire," it produces "Wife Swap" (returning midseason") and the upcoming "Find My Family."

The indie studio also produces VH1’s upcoming "Price of Beauty with Jessica Simpson," "The Fugitive Chronicles" at A&E, and the upcoming TLC series "One Big Happy Family," among others.