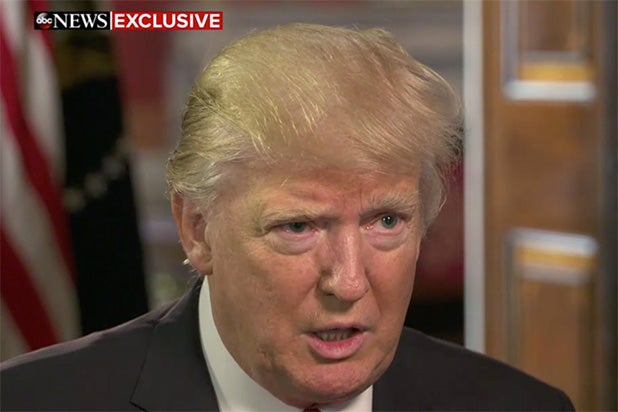 Donald Trump ripped the “ridiculous standard” of the first 100 days in office as a benchmark, but ABC News senior vice president Tom Cibrowski disagrees with the president.

“We think it’s important for all of our platforms to take a step back and look at what President Trump has said, what he has accomplished and the challenges he’s faced so far, and get a sense of what Americans from all parts feel about the direction of the country right now,” Cibrowski told TheWrap.

While 100 days is a small portion of a four-year term, many historians, cable news programs, political watchdogs — and Trump himself as a candidate — cite the first 100 days of a presidency as a significant benchmark.

“So much has happened over the past three months,” Cibrowski said. “ABC News will devote significant resources the entire week leading up to the 100th day to report on the key moments during this administration.”

As Trump’s first 100 days wind down, he took to Twitter on Friday to predict the stories that will be written to analyze his progress and mock the benchmark.

No matter how much I accomplish during the ridiculous standard of the first 100 days, & it has been a lot (including S.C.), media will kill!

Trump’s tweets aside, ABC News will help lead the charge when it comes to examining President Trump’s first 100 days.

“Trump’s First 100” special coverage airs April 23-29 with a variety of programming scheduled to report from across America and overseas, covering issues from healthcare and immigration to jobs and foreign policy. ABC News will speak with voters on their expectations and reactions to Trump’s performance so far.

“Good Morning America” will feature the “GMA Promise Tracker,” which examines how the president has followed though so far on his biggest platforms. Stephanopoulos and the entire ABC News political team will report on how the presidency is changing the Trump family and the way Trump uses Twitter as a political tool.

“World News Tonight” anchor David Muir will travel across the country to counties that were nearly evenly split between President Trump and Secretary Clinton supporters. Muir has been reporting from these factory towns for the past 5 years as a part of his “Made in America” series.

“Nightline” co-Anchor Dan Harris will report from a split-county in a swing state and look back at the Affordable Care Act in Kentucky to see how residents are feeling now. ABC News producers are also in on the action, revisiting key camping stops throughout the week.