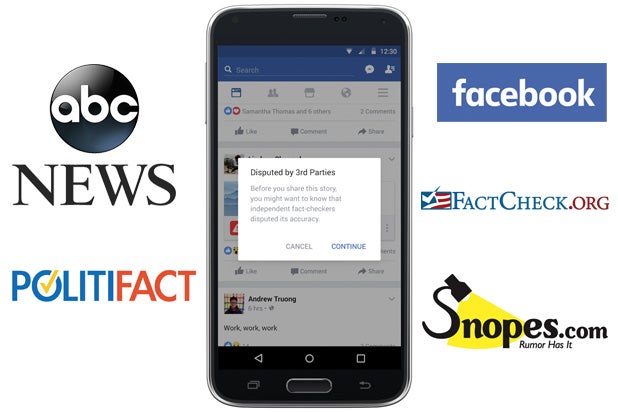 Facebook is partnering with ABC News, FactCheck.org, Snopes and Politifact to combat the spread of fake news that has become a key issue across media in recent months.

ABC News president James Goldston told TheWrap that he is “eager to help” prevent what is an “alarming amount of misinformation” circulating on the internet.

“I think we’ve all seen the toxic effects of fake news over the course of this election cycle and we regard ABC News as being a key part of that public service mission to help the American people understand what is real out there,” Goldston said. “I do believe that fake news is a true scourge of journalism. I think it’s extremely dangerous.”

Facebook News Feed vice president Adam Mosseri issued a statement saying, “We’ve focused our efforts on the worst of the worst, on the clear hoaxes spread by spammers for their own gain, and on engaging both our community and third party organizations.”

Goldston has set up a unit called Real News About Fake News that will use the network’s global resources to “do it’s best to help people understand that there can be a agreed set of facts, even if there is not an agreed set of opinions about those facts.”

The ABC News boss said it’s a “key part of our civic duty to help combat” the spread of fake news.

“We’ve had a pretty longstanding partnership with Facebook … we have good relationships already. When we heard they were looking at ways to do this, we were keen to be involved with them,” Goldston said. “There are real dangers of fake news undermining our core mission. We are absolutely committed to doing everything we can to stamp it out.”

The steps that Facebook and its new partners are taking fall into four different categories, according to Mosseri, the first of which he calls “easier [user] reporting.” This essentially allows users to flag a hoax or fake news by clicking a button at the upper righthand corner of a post.

The second category is “flagging stories as disputed,” in which Facebook will work with third-party fact checking organizations that are part of Poynter’s International Fact Checking Network.

“If the fact checking organizations identify a story as fake, it will get flagged as disputed and there will be a link to the corresponding article explaining why. Stories that have been disputed will also appear lower in News Feed. It will still be possible to share these stories, but you will see a warning that the story has been disputed as you share. Once a story is flagged, it can’t be made into an ad and promoted, either,” Mosseri wrote.

“Informed sharing” is the third category, with Mosseri writing, “We’ve found that if reading an article makes people significantly less likely to share it, that may be a sign that a story has misled people in some way. We’re going to test incorporating this signal into ranking, specifically for articles that are outliers, where people who read the article are significantly less likely to share it.”

The final category is labeled “distrusting financial incentives for spammers,” and will attempt to put an end to false news that is profit-motivated.

“On the buying side we’ve eliminated the ability to spoof domains, which will reduce the prevalence of sites that pretend to be real publications. On the publisher side, we are analyzing publisher sites to detect where policy enforcement actions might be necessary,” Mosseri wrote.

Regardless of Facebook’s new partnerships, Goldston is well aware that fake news isn’t completely going away any time soon.

“I think this could be a long battle, but you have to start somewhere and I think this is a good attempt to make a meaningful dent in it and to start to deal with the issue,” he said. “I don’t think any of us think there is a quick or easy fix.”

Facebook has been under scrutiny for failing to battle fake news and recently posted a job listing for a head of news partnerships. The job posting states that the social networking company is looking for someone with at least two decades of experience “to lead Global News Partnerships, serving as the company’s leading representative with news organizations worldwide.”

Facebook COO Sheryl Sandberg recently said she doesn’t “think” the spread of fake news on her social media platform helped Donald Trump win the presidential election. Last month, Facebook CEO Mark Zuckerberg outlined his plan to fight the spread of fake news on the platform. Zuckerberg initially downplayed criticisms that fake news spread on his social media site could have significantly swayed the 2016 presidential election, but later made concessions to the contrary.

Made-up news has been such an issue across the media landscape that Media Matters, a liberal media-watchdog organization known for its fixation on Fox News, recently announced that fake news will now be its prime target.