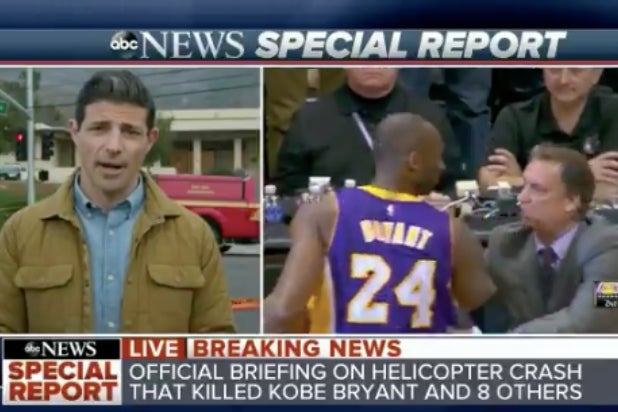 ABC News has suspended its chief national correspondent, Matt Gutman, after he mistakenly reported on live television that all of late basketball star Kobe Bryant’s children had died in Sunday’s helicopter crash.

Gutman corrected the report on a later broadcast to clarify that the only members of the Bryant family who died in the crash were Kobe and his daughter, Gianna. Seven others also perished in the crash.

Gutman’s original remarks were made before the official identities of the victims had been confirmed. He has since apologized for the error.

“Today I inaccurately reported it was believed that four of Kobe Bryant’s children were on board that flight. That is incorrect. I apologize to Kobe’s family, friends and our viewers,” Gutman tweeted Sunday.

A rep for ABC News confirmed the suspension to TheWrap.

“Reporting the facts accurately is the cornerstone of our journalism,” the rep said. “As he acknowledged on Sunday, Matt Gutman’s initial reporting was not accurate and failed to meet our editorial standards.”

“We are in the business of holding people accountable. And I hold myself accountable for a terrible mistake, which I deeply regret. I want to personally apologize to the Bryant family for this wrenching loss and any additional anguish my report caused,” he said.

Today I inaccurately reported it was believed that four of Kobe Bryant’s children were on board that flight. That is incorrect. I apologize to Kobe’s family, friends and our viewers. pic.twitter.com/yYwuB9vpZl