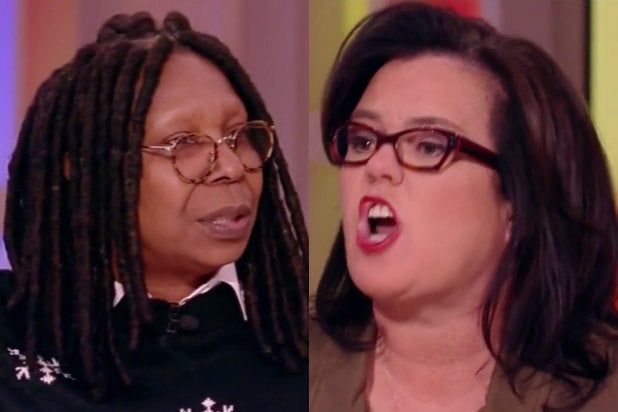 The women of “The View” broke into a shouting match during Thursday morning’s show while discussing racism in America. The “Hot Topics” segment took an argumentative turn after co-host Whoopi Goldberg insisted that there were no implications of racism in First Lady Michelle Obama admitting to People magazine that she and her husband have been mistaken as the hired help.

“Racism exists and that’s a fact of American history and life today, and so we have to face it,” Rosie O’Donnell said.

Goldberg, however, shared that this might be ignorance, but not outright racism.

“Race only comes up for other people,” Goldberg said. “We’ve always been black. We don’t think about it; it just is. But other people want us to address: Is it racism? Do you think it’s racism? I don’t know.”

See video: 'The View's' Rosie O'Donnell vs. All of Her Co-Hosts Over Bill Cosby Rape Allegations

“You don’t think it’s racist if someone turns to the leader of the free country and says, ‘Can you park my car?'” asked Rosie Perez.

“You guys need to know what real racism is,” Goldberg told her four other co-hosts, including guest co-host Laverne Cox.

Goldberg shared a story of her mother being followed by clerks throughout a store, saying that she views their actions as being “ignorant,” but not racist.

“I think a country that elects an African-American president twice, I don’t think every American is racist,” conservative co-host Nicolle Wallace said.

“And then a Congress that doesn’t allow him to do one thing,” O’Donnell interjected.

Both Goldberg and O’Donnell then raised their voices while heatedly addressing one another.

“Listen, you are a white lady telling me what is racist to you, which is fine,” Goldberg told O’Donnell.

“I’m a gay-American that has been called a dyke,” O’Donnell said back.

“It’s not the same,” said Goldberg.

“That is not the same,” said Goldberg.

“You don’t have to be black to know what racism is,” O’Donnell said.

“Yes you do,” Goldberg said.

“Yes you do, baby,” Goldberg said. “There are white people who get it. But this is why I will not agree with the blanket statement that America is racist. I don’t agree, I’m sorry. Kick my butt.”

Watch the video from “The View” here.