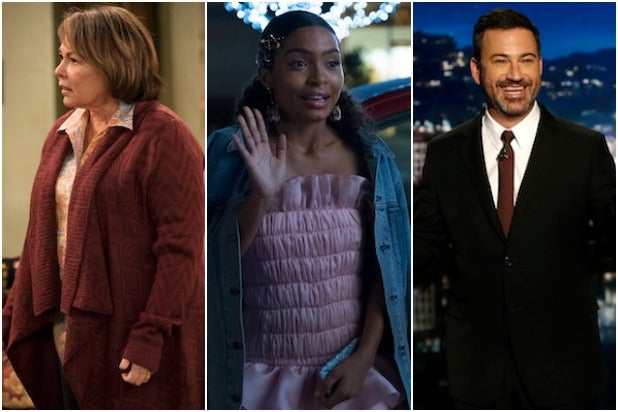 The network opened its show with an “American Idol”-themed bit that saw judges Katy Perry, Lionel Richie and Luke Bryan decide which ABC star gets to open the show (it was, of course, Roseanne Barr). Jimmy Kimmel returned after a year off to roast ABC … and pretty much everyone else. And it just wouldn’t be an upfront without trailers, and there were plenty, as ABC showed off footage from multiple new series including “The Kids Are Alright,” “A Million Little Things,” “Single Parents” and “The Rookie.”

“American Idol” also closed the show, with Ryan Seacrest present to promote the season finale, and the finalists joining Bebe Rexha as she performed “Meant to Be.”

Read below for six things we observed from our perch at the Lincoln Center.

ABC made a slight tweak to its upfront this year by bringing its sister cable network Freeform along the ride. Roughly 30 minutes into the presentation, Freeform president Tom Ascheim took the stage and told ad buyers in the crowd, “If you’ve come here to learn about killer mermaids, you’re in the right place” — referring to mermaid thriller, “Siren.” During the network’s 20 minutes on stage, it aired trailers for new series “Cloak & Dagger” and its “Pretty Little Liars” spinoff, “The Perfectionists,” and brought out “Grown-ish” star Yara Shahidi.

Ascheim also took the opportunity to take a few shots at the network’s rivals, touting their ability to reach young people. “Our competitors often use shortcuts, opting for crude instead of clever and gross instead of great.” They also talked about Christmas programming for some reason, even though it was nearly 90 degrees in New York on Tuesday.

ABC may be tied with Fox for third place in the 18-49 ratings race this season, but if you hear ABC execs say it: They’re in first place … in other ways. ABC entertainment president Channing Dungey threw out a lot of stats that make ABC look great. They’re the #1 network in delayed viewing (Live + 35 … how far away are we from Live+Infinity?), six years running as the most social network and “American Idol” was the #1 reality series on social every Monday. That’s the fun thing about numbers: You can manufacture them so everybody is a winner!

We should point out that Ben Sherwood gave out another stat that made ABC look both good and bad, when touting how “Roseanne” was the top show on TV this season. “The last time we had the number one show was 24 years ago, that’s some cool amount of trivia that we chose not to mention in the last 24 years.”

Outside of Barr’s introduction of Disney Media Networks co-chairman Ben Sherwood as “the guy who really writes most of my tweets,” there wasn’t much stage time for ABC’s big hit show. That didn’t mean the Conners didn’t have a presence however, as executives were all-too-happy to tout the success of the show… multiple times. John Goodman also provided the voiceover for a new ad campaign for ABC News.

No stranger to ABC’s upfront stage, Nathan Fillion was one of the few stars ABC trotted out this afternoon, which he was there to promote his new series “The Rookie.” A longtime veteran of shows that aired on ABC including daytime soap “One Life to Live,” “Desperate Housewives” and costarring in “Castle” for eight seasons, Fillion was hoping he’d be easily recognizable to the ad buyers in the audience. Or, as he put it, he knew he was the favorite of everyone’s mom.

After sitting out last year, Jimmy Kimmel returned to the upfront stage for what Sherwood called their “annual act of ritual network executive humiliation.” After Kimmel came out, he was at first gracious to the crowd for the support for his son (he had to miss last year to take care of the newborn). “I’m happy to report Billy is now a year old,” he said, which got a nice applause from the audience. “You’ll be happy to know he’s doing much much better than network television.” He also took a crack at ABC’s new upfront partner in Freeform: “I’ve been a big Freeform fan since I heard of it 20 minutes ago.”

There were plenty more barbs from Kimmel, which you can read here.

ABC took a page out of the movie theaters’ playbook, by welcoming attendees with some trivia on its big screen. A few of the highlights: Did you know that “Roseanne” (in case you didn’t know it was on ABC) was initially going to be called “Life and Stuff?” The title change was probably a good idea. Also, “America’s Funniest Home Videos” has given out $15 million in cash over its 28-season run.